Here is some disturbing news I was told the other night. Apparently, on March 3 congress in Venezuela passed a law that forbids the manufacture, importation, distribution, purchase, sale, rent or use of "violent" toys and videogames. But since the law is non-specific about what actually constitutes a "violent" toy or game, nearly everything that can be viewed as such is now outlawed. So retailers have pulled things like Star Wars, G.I.Joe, Transformers, Max Steel, Power Rangers, etc from their shelves!

Furthermore, auction sites have been pulling toy auctions and the post offices are cracking down on it as well so collectors can't buy toys in stores locally or order them from abroad! To be caught doing so means fines and/or 3-5 years in prison. Of course, I bolded the word "use" above because no one is exactly sure what they mean by that. Is "collecting" the same thing as "using"? As crazy as it sounds, right now people are worried about being sent to prison for collecting toys!

Evidently the reason for all of this is a videogame called "Mercenaries 2: World In Flames". Now, I'm not a gamer so I never heard of it until I was told about the situation there, but apparently it's a game produced in the US, at least in part by people who have made videos for the US military, and the subject of the game is the overthrow of the Venezuelan president! Now, I can see being all kinds of angry about such a thing, but to take it out on the Venezuelan people seems ridiculously absurd to me. 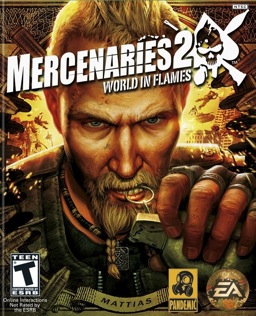 I know that the game has nothing to do with me, and that the law is an overreaction of epic proportions, but I still feel a bit of remorse that something produced in my country is causing such a big problem for all my friends in theirs.

After all the problems I've had with customs breaking into and breaking my shipments from Venezuela, I'd planned for my next one to be shipped to Japan before being sent to me. But it looks like unless something in changed, there isn't going to be a next one at all.

Many thanks once again must go to my good friend Juan Carlos Azpurua, who posted this news on his superlative blog Figurasdeaccion and provided me with all the details in English.

11 comments posted
It is absurd

And of course a two year old game isn't the actual cause for this. I don't want to get too deeply into politics on a toy blog, but this is the government of President Hugo Chávez.

I'm interested in knowing more about why this happened. I think this is a fine place to discuss this, as this is an intersection of toys and politics.

I didn't even notice that game was that old. I probably should have copied my friend's email verbatim, since he actually said it all started with that game. My mistake. ;)

There was an old news article about UFO Grendizer, Mazinger, & other 70s Shogun Warrior shows were once banned by the Filipino government in the 1980s because it's then-dictator, the late Ferdinand Marcos feared that the shows' simple plots were subversive enough to provoke a youth rebellion against his power.

Do you think the motives of Venezuela's current despot coincides with Ex-Pres. Marcos' reason for enforcing the Japanese-Robo Prohibition Act as a means of suppressing any forms of rebellion?

If that's the case then President Chavez truly is an evil, paranoid man.

We people from Latin America are not unfamiliar with Hugo Chavez, he is a socialist president who wants to control everything, he even closed TV stations because they didn't want to broadcast his speeches.

He is worried about violence u will say? well, he is a genocide, lots of people have died because of him and his stupid politics, just look for news about riots in Venezuela.

I'm from Mexico, and we were about to suffer the same issues as our bros from Venezuela, anyway, the actual president is full of $hit too, he doesn't wanna ban anything, he just wanna sell the country hehe

Interestingly enough, from what I've heard, it's actually the US who are presented as the bad guys in this game. I've also heard it's a pretty bad game.

I love Mercenaries 2 it's not a bad game, its just glitchy as hell and it's not so much overthrow of the Venezuelan president more than it is Venezuela is in a state of civil war and you're there to make money and blow **** up this is another case of overreacting and taking a game too seriously (hot coffee anyone?) The game allows you to takes sides with any faction so anyone can be the "bad guy" and the factions aren't JUST
US and Venezuela There are Jamaican pirates an oil Company and China to take sides with

Are they are going to ban LEGO too? I'm mean nowadays LEGO tend to "Violence"?

Crazy world we live in now

Man this guy is nuts, banning all "violent" games & toys solely on the basis of one game; if the game bothered him that much all he had to do was to ban the import of the game into Venezuela, end of story. What do you want to bet that he eventually creates exceptions to this law for things created either domestically or favorable to him, or both.

Well, it seems this law is either not being enforced too diligently or maybe I just got lucky, but I managed to extricate another jumbo from Venezuela. Seller had no trouble at all getting it for me and getting it to me, so hopefully this was all much ado about nothing.

That's excellent news Dave. I've been wondering about the current status of this crazy issue in Venezuela.

This is great news so far--thanks for the info & keep us posted.