(Cypress, CA – October 1, 2009) Go! Go! Get your Power Morphers - it’s Morphin’ time! Bandai America will bring the best-selling Power Rangers toy line back to its intergalactic, prehistoric roots with the “five teenagers with attitude” that started it all in a new collection of Mighty Morphin Power Rangers toys. The inaugural and most recognizable of 15 Power Rangers themes, this powered up Mighty Morphin line will feature both fresh and nostalgic play and collection experiences. Including action figures, vehicles, Megazords and role-play items aligned with the Mighty Morphin Power Rangers TV series premiering Saturday mornings January, 2010 on ABC Kids; the highly anticipated toys will begin to arrive at retail by the end of this year. 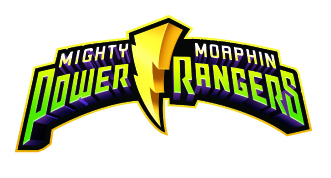 As the original Mighty Morphin Power Rangers took over the air waves - and your brain waves - in 1993 they made an unforgettable impact on pop culture. Showing that heroes come in every color, teamwork conquers all, and girls really can rule (unfortunately for good and evil), they took entertainment and play-time by storm. With three TV seasons, a motion picture and thousands of toys, the Power Rangers have spent 17 straight years in the top ten best-selling boys’ action figure brands in the US according to The NPD Group. 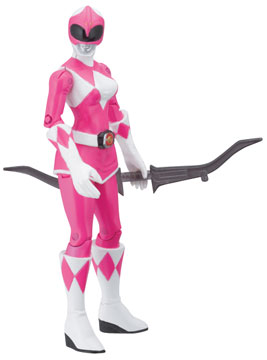 “The original Mighty Morphin Power Rangers captivated the country in 1993, and many kids who played with the toys now have children of their own,” said Tim Wills Senior Vice President, Sales and Marketing, of Bandai America Incorporated, “Families can experience their ‘morphin’ time’ once again as a whole new generation of kids are introduced to the Mighty Morphin Power Rangers toys.”

“I’m tickled pink to have had the opportunity to be a part of this juggernaut children’s action series and brand,” says Paul Schrier, former Mighty Morphin actor and director, “The good-natured humor and strong messages of teamwork and friendship really hit home with audiences everywhere and I can’t wait to see what’s next from this fountain of heroic action!” 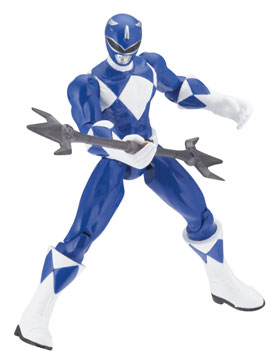 To kick off the refreshed toy line, fans and families will get ready to battle not only for the salvation of the universe, but also for $11,000 in cash prizes in Bandai America’s “Power Up Video Challenge” contest. Consumers will be challenged to view a Power Rangers “cliffhanger video” online or at one of more than 2,000 movie theatres in the U.S., and then submit their own unique ending in a mini-movie or story-board at Bandai.com. Selected by both peers and a judging panel, the winning video and story-board entries will receive $10,000 and $1,000 in cash prizes respectively. Participants learn more and enter to win between October 1 and December 15 at www.Bandai.com.

A leader in introducing Japanese toy trends to the United States, Bandai America Incorporated is a subsidiary of NAMCO BANDAI Holdings (USA) Inc., an entity that resulted from the integration of Namco Ltd. and Bandai Co. Ltd. of Japan. Global interests encompass six strategic business units: toys and hobby (toys, models, apparel and sundries), amusement facilities, game content (home and arcade console gaming), network (mobile phone and PC content), visual and music content (including home entertainment), and an affiliated business group. Bandai America is the manufacturer and master toy licensee of some of the most popular brands in children’s toys and entertainment today, including Power Rangers™, Ben 10™, Dragon Ball Z® , Harumika, and Tamagotchi®. The company is headquartered in Cypress, California and information is available at www.Bandai.com and you can follow us on Twitter @BandaiAmerica.

15 comments posted
JESUS CHRIST!! WHERE ARE

Patience! Patience! These only just came out-! Jeez...

Is it just me, or do these [two] figs have a little deformity to them- big legs, small torso [other than Pink]?
I do wonder, though, if BA will give us the original Dlx Zord molds or new ones?

Personally I think they look way more heroic then prior PR figures. Lets face it , it's never been the small PR figures that were all that cool or well proportioned about the power rangers toy line. The Megazords have always been where it's at.

For all that is good and holy, please let them re-release the original Dragonzord. And yeah, the figures do looked a little awkward.

I just can't believe it. If there was anything that would have helped me (I mean, MY CHILDREN, naturally) get over the fact of no new Power Rangers series toys on American shelves next year, this is it! I'm tickled... uh... pink?

I know where i'm gonna spend my money next year... Hopefully those amazing babies will be released in Canada too...
"Awww man, that's one ugly zord..." Tommy about BA Drivemax Megazord.

Yeah bring on the Megazord.. and I want combining big chunky DX zords too, not lame ass figerines..

God damn I feel old now. As I said in the podcast comments,I was already too old to really care about this show when it came out. The green Ranger's Mechagodzillaish robot was awesome,though.

Eva-
Like I said,I'm no big fan,but don't Power Ranger figures typically have strange,unrealistic proportions? I seem to remember them being really exaggerated as opposed to the characters you actually saw on screen. Not that there's anything wrong with that,in some ways I actually prefer it.

Well, usually their torsos and limbs were really muscular to the point of body-building in the 4.5" figures, which- thankfully last year- they brought down a bit. There were the 10"(?) figures which all had the same bodies (the females were the same as the males, IICR) and then those were repaints of each other with only the heads being different.

But, what I meant by odd proportions here is how they have an almost cartoonish/SD-like quality to them, kinda like those Tonka Rescue Heroes a few years back. And, oddly(?), Pink's cleavage has been enhanced more than before.
------------------------------
CollectionDX Staff

"There were the 10"(?) figures which all had the same bodies (the females were the same as the males, IICR)"
Isn't the yellow one actually a dude in the Japanese show? So for her,that would actually be accurate.

I think the Pink Ranger's "enhancements" are designed to distract the monster-of-the-week so the other rangers can land the finishing move.:)

I was more impressed with with the extra curvy waist and hips on the new pink ranger figure... Ms. Kimberly Jo Johnson is looking mighty fine in plastic :D

And Billy looks like he could finally beat the crap out of some Putties.

I'm curious about how a re-airing will fare. The original Power Rangers is one of those childhood favourites that really has not aged well, say what you will about the Disney seasons but at least they did a better job of making the show feel like a cohesive whole rather than a cheap teen moral lesson with random tokusatsu footage inserted to keep people interested. Plus, the comedy never really appealed to me when I was a kid.

Also I believe Disney don't own the rights to any of the original music. This could mean a new theme song is on the way?

The toy line I can get behind a little more. The figures look an improvement on what we got back in the day, albeit retaining some of the over-muscled-ness. I'm curious about what they're doing with the mecha, whether it'll be reissue time or whole new moulds. If this were Bandai Japan we were talking about I'd be all for creating old favourites with modern engineering, but given some of Bandai America's recent track record I'm hoping for reissues. Keeping them show-accurate this time around would be a nice bonus, which leads me to my final concern; the inevitable mountain of random armoured forms or vehicles that we managed to avoid with the original toys.

Okay folks, I have seen an official video on YouTube featuring a brand new mold for the Deluxe Megazord. It will be the same size as the Deluxe High Octane Megazord, but appears to feature authentic Japasnese decals all-around this time around(!) and silver-painted plastic rather than the original chrome-plated plastic. For the sake of the animation above, poseability appears to be the same in Megazord mode- the shoulders and elbows.

See the 1:40min mark [for precious few seconds of it]-