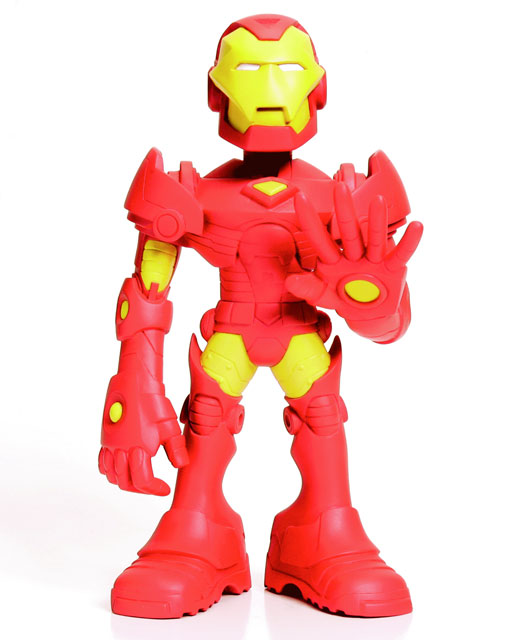 “Being fans of the designer toy movement, Upper Deck wanted to take our Marvel figure license and push the boundaries of each character’s design to bring a new look and attitude to each figure, in this case Iron Man” said Dave Sanders, Upper Deck Action Figure Product Manager. “The project has been headed by TWEEQiM Creative Lab and they’ve done an amazing job of creating a look that appeals to both comic fans looking for a new take on one of their favorite characters, as well as collectors of designer figurines.”

With the goal of merging polyresin statues with the underground styling of urban vinyl, the 10.5" tall polyresin figure presents Iron Man in downright intimidating fashion. The uniquely-designed collectible is individually hand numbered on the bottom, with an overall run size of 2,000 pieces. The Iron Man ($75 SRP) SubCasts figure goes on sale Tuesday November 13 at 9:00 AM PST.

“Iron Man is truly one of our favorite characters from the Marvel world, both in story, and character design. We like the later versions of him, as it exposed more of the functionality of the suit, rather than just being an outer skin of armor. Having also grown up listening to Black Sabbath, I, personally always morphed the two versions of ‘Iron Man’ in my head, that is the song, and the super hero. This gave us the opportunity to tinker with that a bit as a design influence, to make him look as if you could feel him approaching, with every footstep, thudding the earth,” said miQ Willmott from TWEEQiM Creative Lab, who fittingly began his art career creating album covers and t-shirts for several well-known rock bands.

Following Iron Man’s launch this month, Upper Deck’s SubCasts line will release Ghost Rider™ and Wolverine™ in December and other well-known characters, including Captain America™, Thor™, and Hulk™ throughout 2008.

Each collectible figure will be available at www.SubCasts.com, a complete site dedicated to providing collectors with a behind the scenes look at the figures, and www.MySpace.com/SubCasts, the official community space for the figures.

About the Upper Deck Company

Founded in 1988, The Upper Deck Co. is a premier global sports and entertainment-publishing company that delivers a portfolio of relevant, innovative and multi-dimensional product experiences to collectors, sports and entertainment enthusiasts. For more information on Upper Deck and its products, please visit www.upperdeck.com or www.upperdeckstore.com.

TWEEQiM Creative Lab is the Portland Oregon based design team of husband and wife artists miQ (mike) Willmott and Thuy (Twee) Phan-Willmott. Recent transplants from Los Angeles California, miQ and Thuy moved to Portland to start their design business and focus all of their creative energy on developing fresh working relationships through their design work, as well as their own personal artwork. As a design team, TWEEQiM focuses on graphic design, illustration, character design, customization/fabrication and fine art.

I'm actually surprised this figure has taken so long to come out. Mason and I saw it at SDCC last summer and it looked ready for the shelves. I suppose they wanted to delay it as hype builds for the movie.

Anyway, I feel somewhat embarrassed to admit, but I kinda dig super-deformed figures of my favorite characters--though, ironically, I'm not embarrassed in the slightest about admitting that I'm a 29-year-old who plays with toys! ;) So, when I saw this thing on display, along with the other SubCasts, I went over to check it out.

It's nice-looking...but zero articulation. Just a statue. In my opinion, that's kinda dumb. I mean, these "pioneers" are clearly trying to cash in on many other lines' success, such as Medicom's VCD series. So what are they pioneering? Loss of play value?