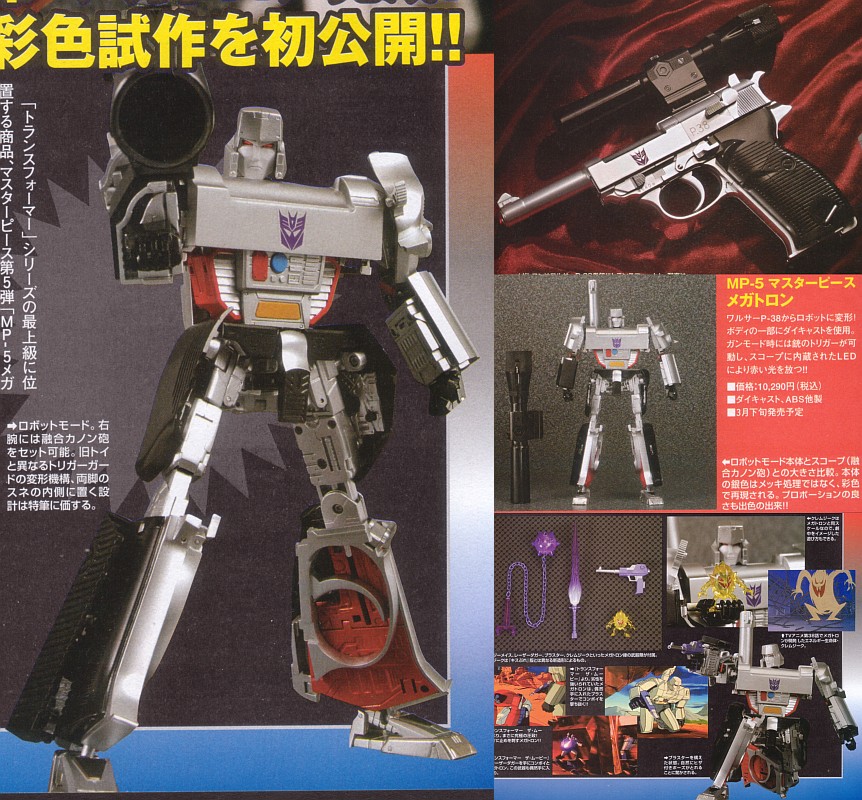 Wow- if I hadn't known beforehand that MP-05 was mostly plastic, I would have though it was a real gun with real metal! That paint app. is so real! No wonder it'll be so difficult to get pass US toy import laws...
.
I never cared for the G1 Megatron toy or the pretty purple of Galvatron, but this is certainly changing my mind. Legs are a little thin from the front, but I think I could overlook that.
.
Cool...
.
Having never seen G1, who's the little flame-like ghost there?

I had the G1 Megatron, in fact he was the very first Transformer I ever owned. Toys R Us had just gotten the very first wave in and Megatron and the min-cars were all they had(on an isle end-cap). GoBots had been out for a few months already so I had a few of those but Transformers were brand new and I was waiting(very impatiently I might add) for them to come out. I was calling Toys R Us on an almost daily basis to see when they came in.(the employees were probably sick of hearing from me no doubt). This was early 1984 if I remember correctly? I was in fourth grade. Luckily my Mother did not mind paying the "high" $19.99 price tag as in my haste to find out if the Transformers were indeed in stock I didn't bother to check the price! lol Incidentally, my Mother bought my nephew a yellow cliffjumper while we were there as well. My Megatron had a lot more weapons and stuff than the masterpiece seems to have but its understandable. I was the envy of my fourth grade class as the only other person that owned a real Transformer at that time was a kid with Thundercracker. Not sure who the flame-like ghost is though, he sure didn't come with my set. I'll be buying the Masterpiece most likely.

My parents NEVER got me that one thing that everyone else really wanted AT THE TIME. Nintendo, Atari, Transformers, Legos, movies just released to VHS- I missed out on a crap-load of stuff in the late '80s. About the most 'popular' thing I ever got was a new bike.
.
I managed to wiggle [maybe] two Deluxe megazords out of them when I was in my 'tweens, but those were under required conditions.
.
(rolls eyes)
.
I feel sorry for myself...

Not only have i preordered one, but I preordered 2 more as surprise gifts for fellow toy zealots.

Looks good! Only wish they tried to match the face/head better. Anyway, this is a buy for me.
P.S. Yellow guy is a character from the G1 show "Kremzeek". He is electrical in nature and can absorb energy.

Yeah I remember that little annoying guy now that I look at the little drawing of him in the pic.

Now if it only has the weight to balance out the look and make it feel like a diecast Megatron/Hand gun/Toy.

Eh, though I don't think the Nerf-coloring on Megs is all that cool, I do like the Classics design enough to get him.
.
How to get it across the Pacific without capping? Simple. Box him already in robot mode with a book-like cover over the box window. That way, even though the toy assumes the form of a realistic looking gun, they can't say they're importing one wihtout the orange cap. The box art could also be modified so that the gun mode has caps on it even though the toy doesn't have them; call the box art a prototype image, it's done all the time!
.
Weren't the MP-01 and -04 Convoys shipped in robot mode? I know MP-03 wasn't, but Starscream had the window box.
.
Quick question: is there an MP repaint of Convoy as Ultra Magnus, or is he getting a new design all to himself later as a new MP?