In the story, this scene is drawn to show the important conversion of ZODD REVELATIONS.

According to the outcome of the last questionnaire from our customers, we decided to answer customer’s requests to reproduce this heavy bloody version for one of our most classic statues: ZODD REVELATIONS, which was released in 2008. The re-release of Zodd be the improvement of overwhelming quality than the last model. It will be delivered to customers with current studio quality.

Mass of blood effects are carefully designed and painted on the statue from Zodd’s face to the base. The eyes of Zodd are totally changed and be repainted as real wild animals eyes, to express a shocked moment when Zodd regained his consciousness and found it was not a dream that he lost one of his horns by Hawk's attack.

Dead Soldier's bodies laid under Zodd as a bloody chair also be repainted as a new design with more blood and dust to express the horrible power of Zodd. ART OF WAR has confidence that our artisans have the top-level skills on color performing.

Our skillful artisans paint every item with hand brushes carefully. The 7 years difference shows the endeavors of improvement of technology from the bottom of the heart of our artisans and can check the difference in color.

"When the sky falls at the holy ground where blind sheep gather and erect a pillar of fire...it will come. The desired...will come."

In the scene, Zodd who arouses fear in others as the "God of the battlefield" encounters the Hawk of Light (Griffith) in a dream and notices his left horn is cut off. It is extremely important scene eliciting a big conversion of the story by an unprecedented incident. "Definitely. I seek only...one thing. The strong! Only the absolute strongest!" The item represents the anguish of Zodd, who have been seeking for worthy opponents in battles but never satisfied. And the scene of cutting off his left horn means appearance of the new Absolute "Hawk". Thus this statue is not only a seated figure of Zodd, but also a monument statue which announces the revival of new Band of the Hawk from BERSERK Comics Vol.21.

The item expresses his incredible force in the battlefields, and the massive aura of the item is suitable for "Zodd the Immortal." A fair complexion senses an entirely different nature of human. On Zodd's skin, not only bloodstain after battles but also the bleeding on his head is highlighted, while his left horn was cut-off by Griffith.

This piece shows the real strong power of Zodd. He repeats the slaughter and be flooded with large amount of bloodshed painting is expressed in the product. Bloodshed covering the left eye of Zodd symbolizes the Hawk of Light (Griffith)’s obedience and Zodd’s cut off his one horn.

This item is the fearless bloodshed painting, expresses that our skillfull artisans takes time to paint minor pieces one by one. The blood is dripped like the weight of the gravity and is gathered making the blood shade and can feel the power of realistic. The mass production cannot be realized due to the appealing pursue of bold and delicate painting.

In the previous version, molding and soldier’s corpse was not satisfactory, but this time, the quality of armor be improved making it more real. Also, this time the quality of armor, skin and boots is improved than the last model making it more unique and refine. The height of base is increased by 2cm and can feel the more volume than last model." 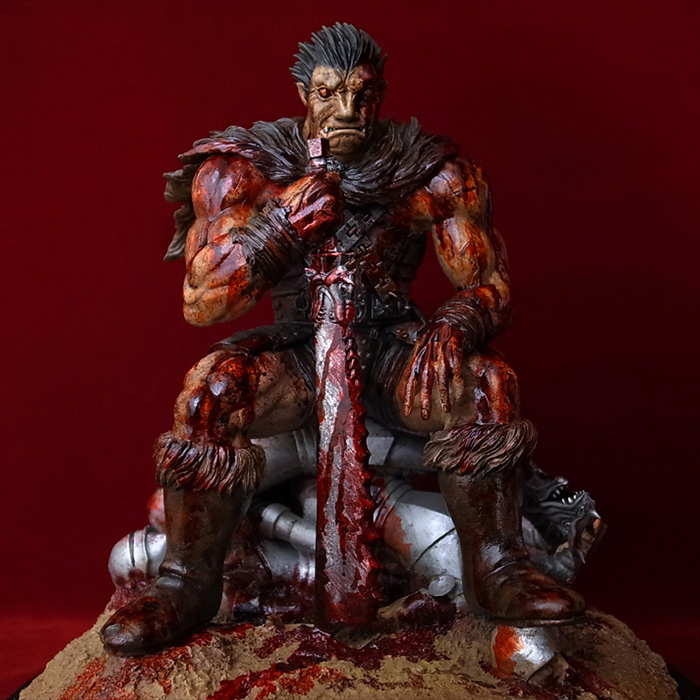 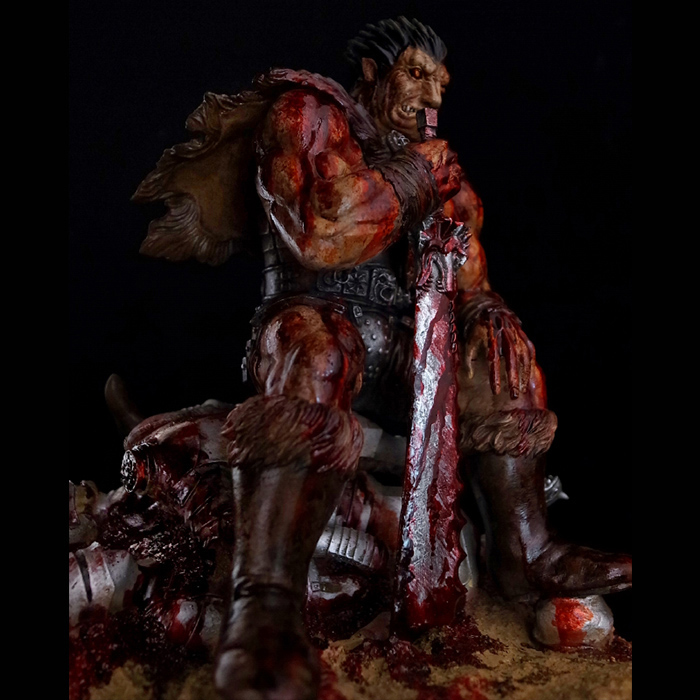 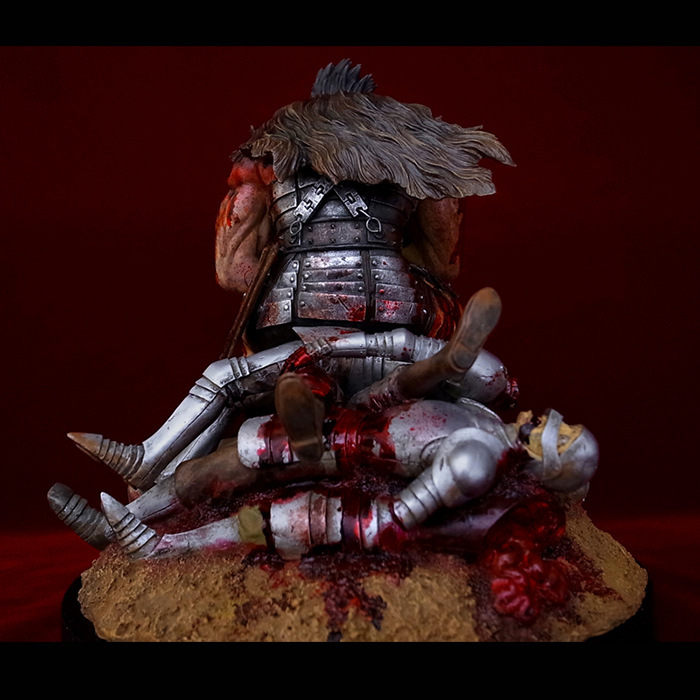 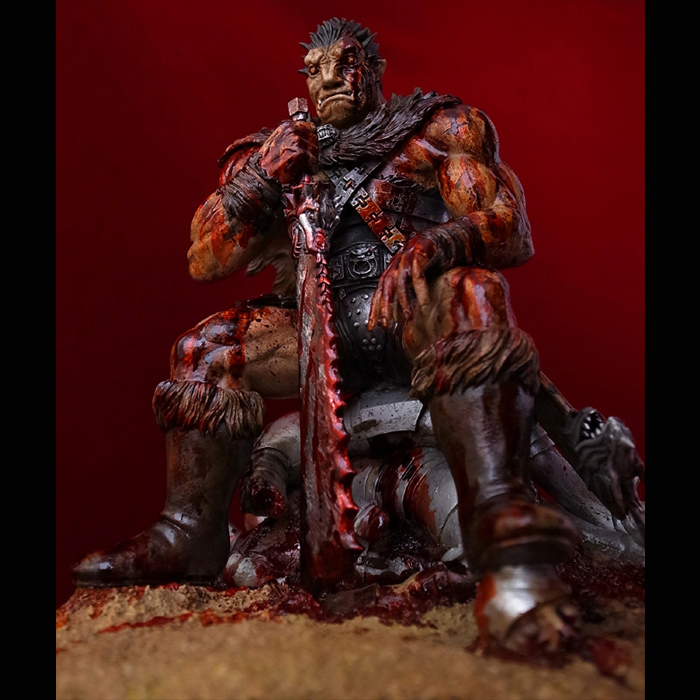 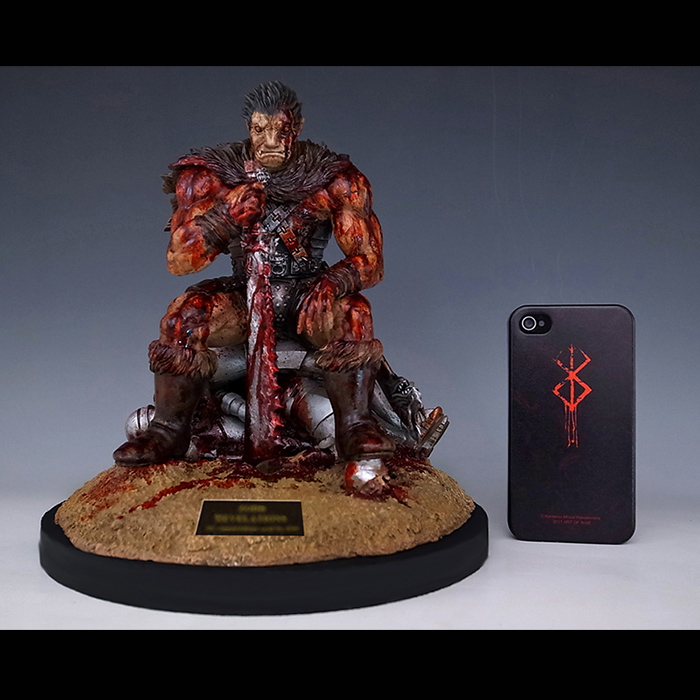