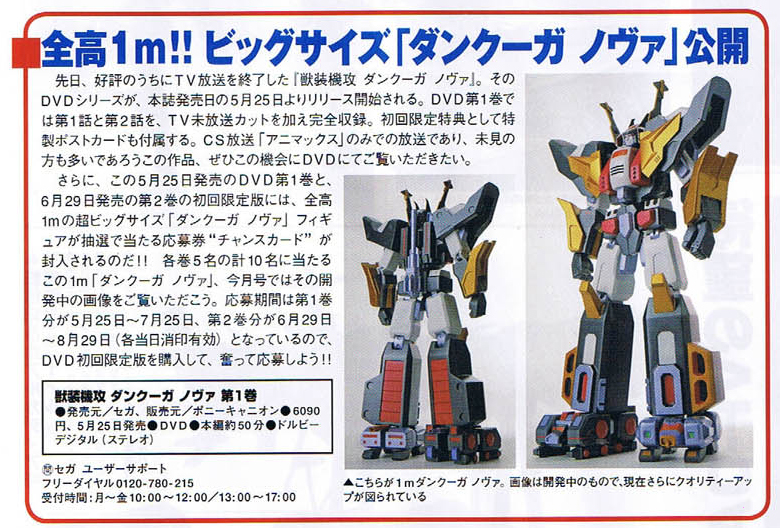 "To sum it up, the article says that when the new series, DANCOUGAR NOVA completes its television run, the series will be issued on DVD starting May 25. The first DVD will contain uncut versions of Episodes 1 & 2, which were cut for television broadcast, and the DVD release will also contain a special postcard.

But, in conjunction with the DVD release of Volume 2 on June 29, there will be a drawing for a special, limited edition (only ten are being made) 1-meter tall figure of Dancougar Nova. Which will be awarded in July. There are no details on what the figure will be made of (I assume that it will be most likely made of vinyl and will be manufactured by Sega)." (source)

The figure is made by ATS inc. (more pictures behind link)

Now up from Ohtsuka Kikaku is a 20cm PVC and Diecast Mazinger Z. The figure is part of the Dynamite Gokin Collection, Super Robot Series No.1. More info here. PROPSIZE Oompa Loompa from Charlie and the Chocolate Factory All four Megazone 23 Garland toys from Alter-Sai are now on sale. Each features removable accessories and weapons, and is only 4 inches tall! Made of PVC and ABS plastic, these go for about 3,150 yen each. (More info) ...how similar in appearance the back armor of the humanoid form of the Garland(s) and the EVA Units are to each other? I swear that the armor for the EVAs was based on the mecha from this three-part OVA...