This news totally made my day, and may be my favorite toy announcement of the year so far.

MINDstyle has announced that they have begun work on an ATC (Art Toy Collectable) of the character V.I.N.CENT from Disney's 1979 movie "The Black Hole".

Damn do I love that movie.

As posted on the MINDstyle Blog

"The Black Hole” is Disney’s 1979 science fiction film about a group of space travelers who come across a long missing spaceship teetering on the edge of a black hole, and their discoveries within the ship and beyond… the vast, empty nothingness where space and time end. Anything that crosses its border enters a universe of the complete unknown. And so begins a story that only Disney’s film magicians could tell. A story of robots and humanoids. Of human genius and madness. And a spectacular descent into nature’s ultimate mystery - The Black Hole." 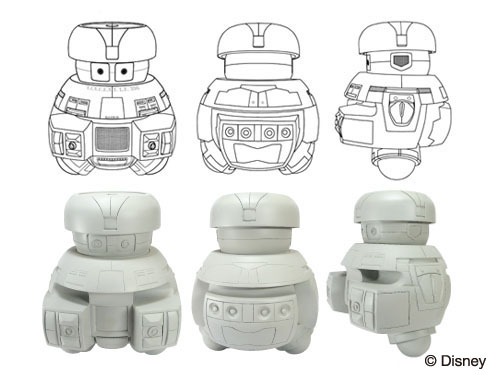 "The Black Hole” was the Walt Disney Company’s first PG-rated production — big news 30 years ago, but times have changed! Directed by Gary Nelson and starred Maximilian Schell, Anthony Perkins, Robert Forster, Joseph Bottoms, Yvette Mimieux, and last but not least, Ernest Borgnine the motion picture has found a loyal fan base. With this being the 30th anniversary of The Black Hole and only rare limited merchandise available, we were all too excited to be working on a limited edition art toy collectibles (ATC) figure of V.I.N.CENT for collectors.

Everything starts with the concept art. Since there was little content for us to reference, we created the line art with DCP. The process got under way with the sculpting and raw resins as shown here."

Price and Release date have not been announced, but you can be damn sure we're keeping an eye on it.

I hope to god, this happens and is done well. I almost buy those terrible small toys that came out during the movie...

Makes me a little nervous... And their blog doesn't exactly inspire confidence either. Hopefully, these will be reasonably-priced and since the design is simple, they won't screw it up and make what should be a *toy* into a bougie designer art collectible...

While I'm still hoping some crazy Japanese company does a DX toy of him and B.O.B., this is probably the most excited I've been for a toy in decades.

I'll admit that I'm a bit upset since I was actively looking to produce a vinyl of this myself, maybe some loose lips got back to Asia. But since it appears they have the official backing then good luck, the money it costs me to buy instead of produce will be substantially less.

The company does some great Disneyana stuff and is high quality. Since this appears to be something Disney is sponsoring, I expect it to be of similar quality to the other offerings. The bad news is it will likely be expensive, and a statue with no moving parts.

The Black Hole is one of the most under-appreciated sci-fi films of the era, and the merchandising beyond the initial 1979 release has been almost nil. Aside from the excellent Kubriks from a few years ago and a collector coin from a Disney club, there was nothing in over 25 years.

I hope this will be a line and we'll see old B.O.B. and Maximilian as well. Maybe even a S.T.A.R.

God Damn it, now I need to go watch it again.

I guess you know more than I, about the company, I was hoping "praying" they would be diecast and work (move parts) like the robots in the movie (you know heads, legs, and arms retracted). If is just a statute...will be good for my wallet...because I will pass...