June 21st, 2007 – Shocker Toys will be hitting Comic Con International in San Diego (Booth #4517) in the 4500 aisle, debuting some exciting new lines like Adult Swim’s Metalocalypse and Sci-Fi’s Who Wants to be a superhero.  On hand will be GWAR action figures wave1, Indie Spotlight action figures and our flagship Shockini line of figures with new kit designs for 2007.

We will also have give-away items EVERY DAY at SDCC as well as raffles to make sure our friends have a great time.  This is a chance to get Shocker Toys Exclusives, not available any where else, free of charge.

Since exclusives are the stars of SDCC, we are proud to announce our boys of 2007!

Stop by the Shocker Toys booth this year and pick up your Metalocalypse Nathan Explosion and William Murderface Dethklok figures!!  Each appears in their “death” stage makeup, limited to 500 pieces of each, for 20 dollars each. 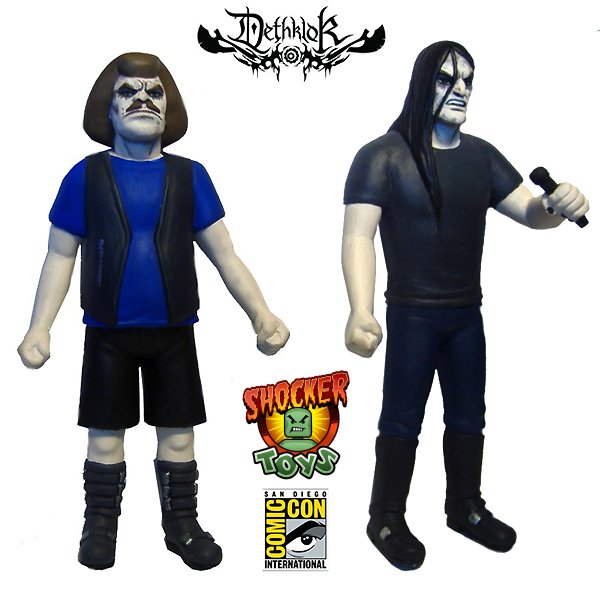 ALSO, be sure to attend this special event…

What plans are in the works for new products? How did Shocker Toys start and what happened along the way?   Ask any burning question you've ever had about Shocker Toys and be heard as the owners, sculptors and licensors sit down together.  It’s a unique opportunity to find out how a smaller toy company overcomes the pitfalls inherent in doing business in today’s economy.  It’s also a great chance to talk to the artists and creators who have come on board to have their projects immortalized in plastic!  Company Heads Geoff Becket and Lance Buttiglieri join Who wants to be a Superhero, Metalocalypse and Indie Spotlight comic artists for what is bound to be an informative and entertaining panel, the likes of which could only happen at SDCC.

To set up an appointment to meet with Shocker Toys representatives while at SDCC, please contact Geoff Beckett at 201-913-7027

Other booth appearances will be Indie Spotlight comic creators- Rob Schrab and others, Fangoria Comics and Kevin Michaels director of Vampira the movie with a limited convention exclusive print of Michael Madsen's project SHIFTER.