Underground Toys are pleased to announce details of their 2010 San Diego Comic Con exclusive Doctor Who item – The Eleventh Doctor with Dalek Scientist.

This item will be available for sale at Underground Toys’ booth # 3949 and also on BBC America’s booth #3629. 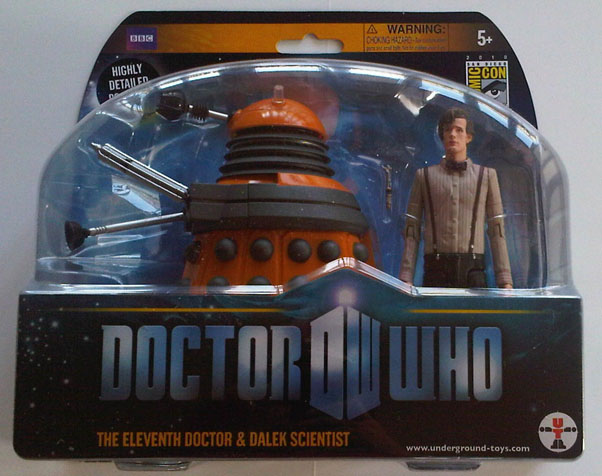 The Eleventh Doctor saw off not one but two alien threats almost as soon as he crashed to Earth. His new companion, Amy Pond, first met him when she was seven years old, and while he was clad in the raggedy remnants of the Tenth Doctor’s suit. Twelve years and four psychiatrists later, the girl who waited wanted answers! Realising he owed her that much, the Doctor, now clothed in a tweed jacket and a cool new bow tie, welcomed Amy into a brand new TARDIS, and took off on a series of thrilling adventures around the universe. However the two time travellers are being followed on their journey by a crack which appears wherever they go... and it looks a lot like the one on Amy’s bedroom wall... 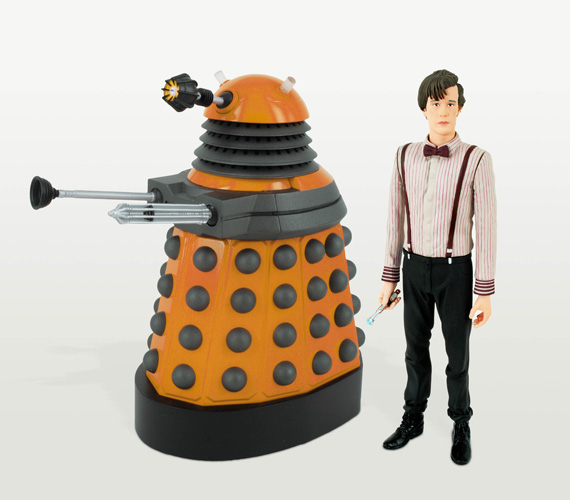 Many years ago, the Daleks sent out thousands of egg-shaped Progenitors containing the genetic coding of the race, so that new Daleks could be created whenever necessary. One of these Progenitors was found in war-torn England during the Second World War and transported to a Dalek ship. However, because the Daleks that found it had been genetically modified by their creator Davros, using his own DNA, the Progenitor did not acknowledge them as pure Daleks, until the Doctor identified them as such and the Progenitor created a new race of powerful Daleks as a result. Amongst these Daleks were the Orange Scientists.

In this exclusive set from Underground Toys we present the Eleventh Doctor in burgundy shirt and braces, and an Orange Dalek Scientist, the Doctor comes with a Sonic Screwdriver accessory.

The dalek rules; the doctor can go back to meh town.