These items will be available for sale at Underground Toys’ booth # 3949 alongside the 11th Doctor and Scientist Dalek contemporary exclusive item.

THE FIFTH DOCTOR IN REGENERATION OUTFIT

Following the events at the Pharos Project which caused his regeneration, the Fifth Doctor escapes with his companions back to the TARDIS. Suffering from post-regeneration trauma, he only narrowly manages to save the ship from destruction as it plunges back through time to Event One, the hydrogen in-rush that preceded the creation of the universe.

The Doctor then seeks sanctuary, with companions Tegan and Nyssa, in the peaceful domain of Castrovalva, only to discover that it is an illusory, dimensionally paradoxical trap set for the him by the Master, unwillingly aided by Adric, whom he has kidnapped. The Doctor eventually wins the day by enlisting the help of the Castrovalvan people who, although also part of the Master's creation, are nevertheless able to exercise free will.

In this exclusive set from Underground Toys we present the Fifth Doctor as he appeared in 'Castrovalva'. Newly regenerated from the Fourth Doctor, and still wearing his iconic burgundy outfit, the Fifth Doctor comes with a Sonic Screwdriver accessory.

THE FIFTH DOCTOR and THE MASTER from ‘PLANET OF FIRE’

His youthful appearance belied his wisdom and experience, but this Doctor still found it frustrating that so many people questioned his judgement, especially his companions. While on an alien planet he and his companion Peri contracted a disease and the Doctor gave Peri the only cure, necessitating another regeneration…

THE MASTER from ‘PLANET OF FIRE’

The Fifth Doctor and Turlough are on the island of Lanzarote because the TARDIS has detected a mysterious signal being transmitted from an unknown, recently salvaged artifact. They meet a young American botany student named Peri Brown, whose stepfather has been replaced with a shape changing robot as part of a plot by the Master. He plans to bring the TARDIS to the planet Sarn, so he can use that world's revitalising Numismaton gas to restore his body, accidentally shrunken in an accident. The Master is apparently defeated when the stream of gas turns to a hot flame. The Doctor destroys the shape changing robot, Kamelion, at the robot's own bidding as it has become completely unstable. Turlough leaves to return home, while Peri leaves with the Doctor.

In this exclusive set from Underground Toys we present the Master from 'Planet of Fire' and the Fifth Doctor. The Fifth Doctor includes his cream Panama hat and comes with a Sonic Screwdriver accessory. 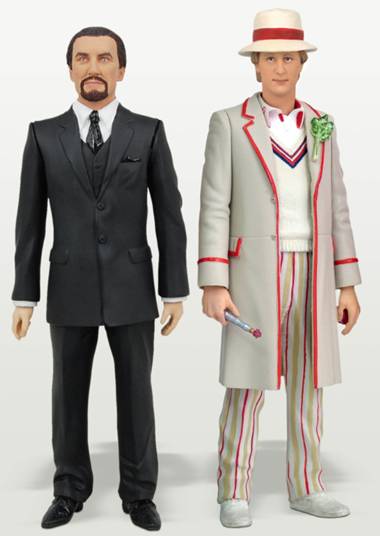