An image included with Masterpiece MP-04S Convoy "Sleep Mode" has a hidden message about the next Masterpiece Transformer. 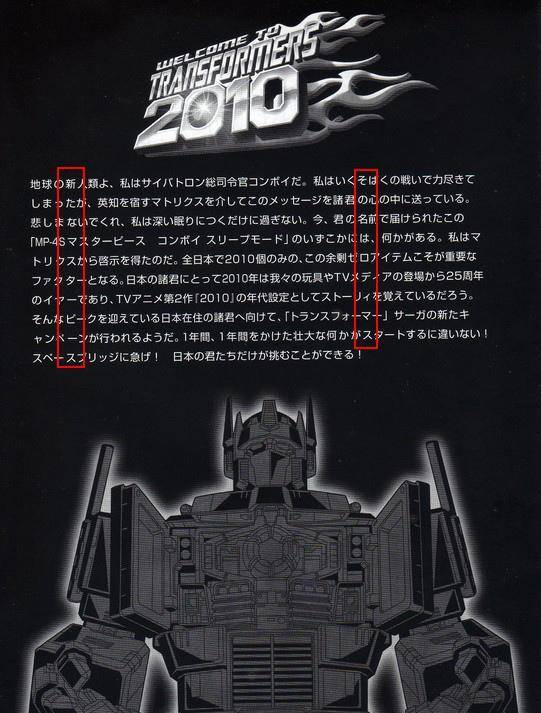 "The name of the Next Masterpiece is Rodimus."

Now if you will excuse me, I need to rock out to some Specter General (aka Kick Axe).

Oh- did anyone hear the latest about another MP TF other than Rodimus here? They're planning to release a MP version of... "Revenge of the Fallen" Starscream.

Now, here's the catch: for $120, you're simply paying for a repaint of the as-yet-to-be-released Hunt For the Decepticons (heretofore known as TF:HFtD) line Leader-class Starscream. So far as I am aware (and this is breaking news BTW), instead of the Leader-class' tan, he's gonna be a more gray-ish coloring, and keeps his tattoos.

Why must you ruin this joyous occasion with monkey-jet.

Hey, personality aside, monkey-jet does it for me. I like monkey-jet. Matter o' fact, I'm gonna review Leader-class monkey-jet when he comes out in August.

But to call him MP-quality is not cool, I agree.

Monkey-jet... I guess he would be better than Rodimus.

Besides, which would you rather have: monkey-jet, or "the guy who replaced Optimus"???

Sorry pal, but that's not a hard choice for me to make. Rodimus doesn't compete with monkey-chicken-jets, he blasts them & donates their scorified remains to the bar-b-q slaghouse for the poor gobotrons to eat.

Actually... they both SUCK! along with that retarded dinosaur Grimlock. Ahhh that feels better, I was dying to get that off my chest :0

"Actually... they both SUCK! along with that retarded dinosaur Grimlock. Ahhh that feels better, I was dying to get that off my chest :0"

When you name yourself after a TV/movie character, it's always awesome to have a high-quality version of that as a toy or model. ^^

Not really into rodimus, but Optimus was amazing, and grimlock looks like he's amazing. Masterpiece (movie figures aside) goes down smooth and satisfies.

The only reason for me to rejoice is that this will more than likely lead to a MPC Galvatron.

regardles what people say him, jazz and grimlock were my only transformers so it will be an honor for me to get him as he was my first toy

Just hurry up and make a MP Soundwave for Gods sake. They could price it at $500 and I'd still put life on hold to buy it