Last November, I dropped a review of Far East Monsters' Destroy All Monsters Battlezone Godzilla statue. It was a hot item, but almost immediately, folks were clamouring for the next entry into the series. Well, we know the next monster's identity: none other than Gojira's nemesis, King Ghidorah.

But you knew that already! ;) 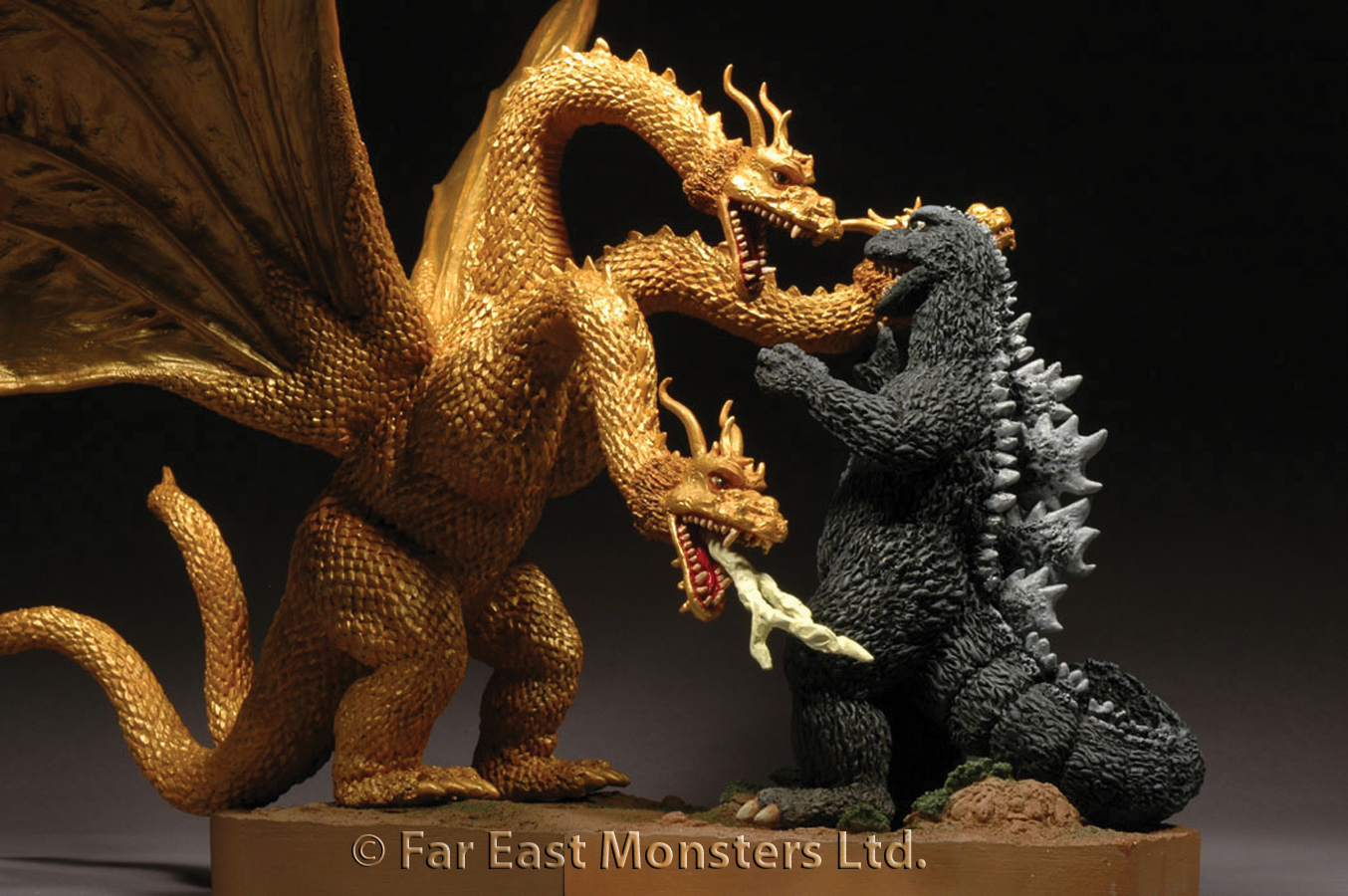 Well, Bill from Far East Monsters has hooked us up with even more pics showcasing not only the villain from the film, but also the next statue in the series: Rodan and Mothra larva! Of course, the sculpt clearly isn't finalized, so the final product may look different, but check out how incredible this diorama is shaping up.

This is going to kill, folks! King Ghidorah should be out very soon (by SDCC?), but there's no announced release date yet for Rodan/Mothra. If the pace set by Godzilla and King Ghidorah means anything, then I'd say hopefully by early 2009. As these guys get released, you can count on video reviews on CDX to show off the lights and sounds as the diorama grows...

This may be a bit after the fact, but we wanted to post pictures of Far East Monsters' Wizard World Chicago con exclusive DAM Battlezone Godzilla from last month. No, it wasn't the same offing as the Wizard World Philadelphia exclusive. Check it out below!

Look...he's got a rock! The Philly exclusive is obviously quite sold out...and there was only 50 of these Chi-town joints, so ya better move quick if you didn't score one at the con.

And if that wasn't enough...Needcoffee.com is running an independent contest where all you have to do is sign up online for a chance to win a DAM Battlezone Godzilla. Can't go wrong with that! Click here for the contest, which ends July 16th, and stay locked to CollectionDX for the latest buzz from Far East Monsters!

I am counting the days until I get that King Ghidorah!! Just can't wait.. This line is far and away the coolest thing that no one is talking about (and much cooler than most of the things that people are talking about, imo......)

All I can do is pray someone picks up the remainder of the line, or FEM gets back together if the economy were to ever improve. After seeing this prototype of Rodan and Mothra, it is that much harder to accept the lines demise. It hurts to KNOW what King Ghidorah should be aiming at with that electrical bolt!!!

I wonder if anyone knows how these licensing arrangements with Toho are structured? I can't help not giving up on these future releases. I have not been so into a Godzilla line like I am into these in a very long time. I am curious if the license agreement expires, was terminated, or can be resumed in the near future if Far East should re-open? Sanjeev- you seem sort of -in the know- with this particular company and this line. Can you shed any light please? It kills to know the SCULPTS and SOUND CHIPS were complete for Mothra Larvae/Rodan and the never before seen Gorosaurus! OUCH that stings! Thanks-Sanjeev

Iirc, I think Sanjeev's contact with this company left not long before they folded, so I don't think he'll have any insider info at this point. Maybe I'm wrong though.

Hey,it's no secret I didn't care for the line,but the people seemed like nice guys.

Grandzinga-I don't know any details about Toho's agreements,but I've always heard they're really one sided towards Toho. Like IIRC you pay a boatload for EACH kaiju,and that's why you see a lot of made up opponents in the cartoons and video games and such. It's not a flat fee like when you get the rights to say Batman,and you get to use Robin,Joker,etc.