Japan continues to release cooler versions of the transformers we get in the states. It's just not fair. Why don't we get chrome too?

These two are due 11/2008 for 2100 yen. As an aside, Newbury Comics has begun to carry Henkei Transformers in their retail stores, although they are marked up to about $40 each. 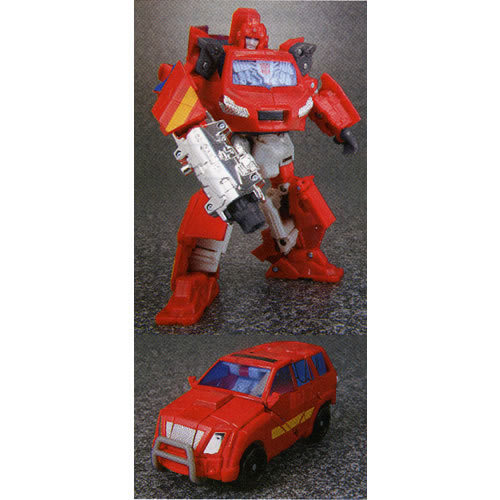 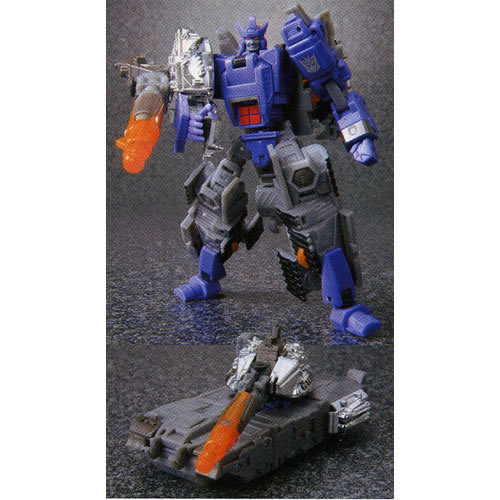 It's Henkei, not Heneki. And thank god Classic/Unoverse has no chrome, it screws up the whole color scheme, it's almost forced on some of these guys. chromed spilers, gunbarrels... nah, Classic color scheme is way cooler. Ok, I do want 3 Henkeis, but still, they destroyed all of Classic Jetfire's charm by making him show-accurate. Thankfully I got myself the american :P

Hahaha....we need to get Josh a spell-checker, huh? ;P Fixed.

Anyway, I tend to agree about the chrome. I've seen these in person and the chrome looks pretty out-of-place. The figures just look very plasticy, unlike their G1 counterparts. I think chrome only works on toys with mixed media: diecast bits with glossy paint, matte-colored (unpainted) plastic, and transparent parts (like the original G1 Transformers). Now, contrasted only with very dull unpainted plastic, it looks just wrong.

Sanjeev, you're right that some of the chrome is misplaced and looks better without on certain Henkies.

Take Ironhide for instance - why isn't his grill chromed? Isn't that where it makes the most sense? The bling is in the wrong place. And what's with the shiny shoulder on Galvatron?

I agree that the chrome doesn't mix well with the cheap plastic in general. Not for this line. They're just tacking it on without any regard for the design just to make a Japan exclusive deco. But I do like the chrome weapons on the car brothers and Starscream. It's a nice touch, but not worth the $27 import pricetag for me.

I agree wholeheartedly. On Ironhide, that weird gun-thing on his right arm appears to be chrome (I'm assuming it's some part stored in the back of the van in his alt mode). That's okay, I guess, because it fits in with the chromed weapons theme. But not chroming the front grill, like you said, is tragic. And Galvatron? That's just absurd. A chrome turret on a tank? Wow...can you imagine how a tank with a chrome turret would fare on a battlefield? Hehe..."shoot me! shoot me!".

Anyway, you're right: these obviously ARE an excuse to make a Jp-exclusive colorway, but besides the chrome, the regular paint is legitimately cooler (IMO) because it matches their G1 counterparts so much better. So, since the added chrome is fairly benign on Starscream and Jetfire, I'd suggest getting the Henkei over the older Classics versions of those toys if you don't already have them. Their designs are simply that good and fans should definitely have at least one of each of those sculpts.

...But then again, it looks like Hasbro is re-releasing Classics Starscream in the "Universe" line, and it appears to have a paint job VERY similar (but not identical) to the G1-accurate Henkei color scheme...minus the chrome! Huzzah.

[though, admittedly, I miss the blue nosecone on Starscream...what ever happened to that???]

See this is why I have you guys around. A lot of this stuff I get off of the Japanese news sites, and then I have to translate it, and a lot of it does not always come across as its supposed to.

Oh and sometimes I can't spell. Hey, if there were more people than me posting news I could spend more time spell-checking it.

What can you do?

A spell-checker, though, would be nice to have on the site... Or, just use the built-in one that Firefox uses!

Wait, since when we can post news around here? I could bring many TF news here, but they probably would also concern US Transformers, which are sort of abandoned here when we talk about the news.

Wallas, I will email you concerning news items. I'd love to have you post some.

An Ironhide that actually resembles the show is a must buy for me. I mean,I know it's not perfect,but come on,compared to the G1 toy it's a dead accurate likeness!!