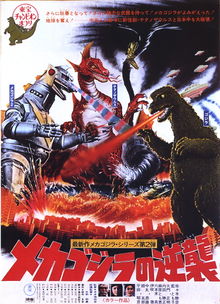 Terror of Mechagodzilla, released in Japan as Mechagodzilla's Counterattack (メカゴジラの逆襲, Mekagojira no Gyakushū), is a 1975 tokusatsu kaiju film. The film was titled The Terror of Godzilla in its original American theatrical release. The 15th film in Toho's Godzilla series, it was directed by Ishirō Honda with special effects by Teruyoshi Nakano. It is the second film to feature Mechagodzilla and the only film to feature Titanosaurus.