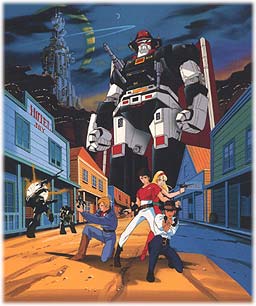 The series aired on Nippon Television from October 7, 1984 to September 25, 1985, totaling 51 episodes. In 1986, the rights to Bismark were sold to the United States company World Events Productions (WEP). WEP reorganized and rewrote the series, incorporating both original episodes and creating six new ones before releasing it under the name Saber Rider and the Star Sheriffs.