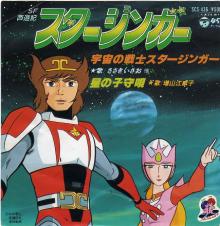 Science Fiction Saiyuki Starzinger (SF西遊記スタージンガー, Esu Efu Saiyūki Sutājingā) is an anime series aired in Japan from 1978 to 1979. It translates literally to "Science Fiction Journey to the West Starzinger". In the United States it is referred to as Spaceketeers and is part of Jim Terry's Force Five series. In the United Kingdom, it is referred to as Sci-Bots.