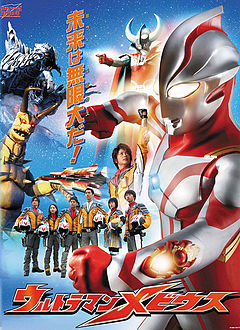 Ultraman Mebius (ウルトラマンメビウス, Urutoraman Mebiusu) is a Japanese television series produced by Tsuburaya Productions and Chubu-Nippon Broadcasting. It is the 22nd season and 40th anniversary production in the Ultra Series, which first began in 1966. It premiered on the Tokyo Broadcasting System on April 8, 2006. Unlike the two prior entries, Ultraman Nexus (Urutoraman Nekusasu, 2004) and Ultraman Max (Urutoraman Makussu, 2005), Mebius was moved from Saturday mornings to Saturday evenings at 05:30. "Mebius" is the Japanese approximation of Möbius; the Möbius strip is a recurring motif in the series.