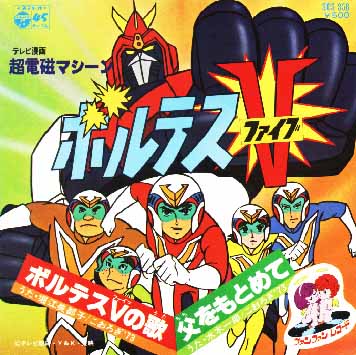 Voltes V (Choudenji Machine Voltes V 超電磁マシーン ボルテスＶ)is a Japanese anime television series that was first aired on TV Asahi starting April 6, 1977. It was later dubbed into English and broadcast in the Philippines from June 4, 1977 to March 25, 1978. It is the second part of the three-part Robot Romance Trilogy created by Tadao Nagahama, and is considered a remake of the previous series, Choudenji Robo Combattler V.

It was one of the most popular Japanese super robot series to be shown in the Philippines. However, its broadcasting history experienced political intrigue and controversy after being banned by the former Philippine president Marcos.

The cancellation of the Voltes V show back in the 1970's in the Philippines was not because Ferdinand Marcos, the dictator of the Philippines, thought the show had messages of rebellion or that activists might use it as a tool to create a revolution along with Ilokula, or to use it as part of the class struggle leading to socialism or communism, or freeing the "slave" class in the Philippines (or in coup d' etat, Voltes V might serve as a code name by the Mutineers and its song as if a password like in Portugal's Grandola Villa Morena). It was cancelled because the television station that aired Voltes V then was the number one station in the country, surpassing other two government-owned TV stations. To negatively affect the ratings of the station that aired Voltes V, Marcos banned not only the airing of the robot anime, but well as the other top rating television shows including Charlie's Angels. Marcos stated that the violent contents had a negative effect on children. The Voltes V cartoon series was only able to resume its TV run after the People Power Revolution that eventually toppled Marcos in 1986. (Wikipedia)