Fall 2014 brings the first Star Wars material produced by Disney, in the form of the new animated show "Rebels". As the name suggests, the show is focused on the early days of the Rebel Alliance and follows the adventures of a ragtag crew of Rebels from a variety of backgrounds. And of course, with a new show comes new merchandising. Among the many products being made to promote the show is a series of large scale figures from Jakks Pacific, who were kind enough to send us the following sample of the Imperial TIE Pilot.

One of the great things about the Rebels show is that it is the closest we've come yet to the Original Trilogy, not only in terms of chronology but also in character, vehicle and set design. As far as I can tell, this TIE Pilot is pretty much the same as the original character. In fact, although the box states the character is from Rebels, it seems to be based more on the classic design than what we saw onscreen. Notice the buttons on the chest have alternating colors like the old design (blue-white-blue), where the new show has switched a couple of them (white-blue-blue). This may simply be a mistake on the part of the animators rather than an actual design change though. 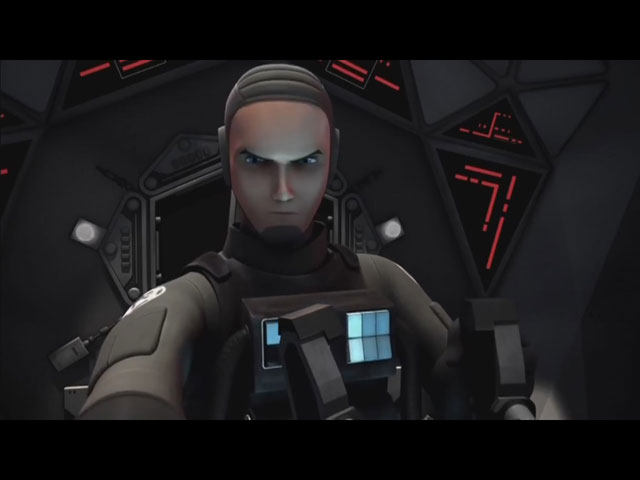 As for the figure itself, it's a simple toy whose main drawn is likely it's size. At 18" tall, it would be a commanding presence on your shelf. And in terms of design, it's a simple figure with just 7 points of articulation (head, shoulders, hips and wrists) and harkens back to the simplicity of vintage Kenner figures. In fact, I can't help but ponder if these and other large scale, simple figures are being made in response to the success of the Gentle Giant line of 12" enlargements of the classic 3.75" figures. Though I haven't held one of those figures, these sure seem like the better value as you get 33% more figure for 25% of the price. But you don't get the same iconic designs, either. You're mileage may vary.

Being a simple figure, there's not a heck of a lot to say about it that the pictures won't say themselves, but I'll point out that although the head turns, it doesn't go far and tends to snap back to it's original position because of the tubes that connect it to the chest piece.

Also, an E-11 Blaster is included but is permanently attached to the right hand.

The figure comes packaged in an open box and is secured by plastic straps. If you had the room to display these figures in the boxes, they would look fine and you could keep them "MIB". Personally, I cut them right out and discard the boxes. I just don't have room to keep them and am not worried about future resale value.

The back of the box shows three of the characters from the show, but there are plenty others available as well, not just from Rebels but from the Original Trilogy as well. As of now, I know I've also seen Darth Vader, Luke Skywalker, Han Solo, Chewbacca, a Tusken Raider, a Storm Trooper, a Scout Trooper and probably others I'm forgetting.

Although it seems that the average Star Wars collector has moved on from minimally articulated figures like the vintage Kenner toys, I'm currently rediscovering my love of them and am really enjoying the new spate of figures in this style, in all sizes.