How many Rocket Tops is too many? For most collectors, the answer is one. For if anyone speaks of the Shogun Rocket Tops at all, it is usually done with disdain, if not downright contempt. They are the red-headed stepchild of the line and most people ignore them. But when I decided a few years ago to start collecting all things Shogun, I took the plunge and began to buy them whenever they popped up for sale. I initially thought there were only two colors and that would be the end of it. Boy, was I wrong!

As I thought, the most common versions came in two color schemes. One had a red body with a black head; the other a blue body with a red head. Each one features painted highlights.

Rocket Tops stand 3.5" tall and feature no real points of articulation. The gimmick is that the you twist the head clockwise and then press a tab that is beneath the feet. When you do this, the head shoots off of the body and and spins "like crazy".

I think that the Rocket Tops are the only robot toy in the entire Shogun line that appears to be a completely original Mattel creation. I have never heard of a Japanese counterpart and they are stamped "Mattel Inc. 1978 USA" on the back.

Rocket Tops were packaged and sold in a bag with a header card.

So, that's it. That's all you need to know about Rocket Tops, right? Well, not so fast! After I got the requisite two regular release Rocket Tops, I next noticed that there also existed variations. North of the border in Canada, they were released in a bi-lingual header card which necessarily features a revamped design.

For these releases, more than just the header card was changed. Compared side by side with the US version, you can see that some of the painted highlights are different. The biggest change is that the "teeth" on the Canadian version are thinner, giving the robot a more fanged look than it's American counterpart, while the rest of the highlights on the body are different colors.. Furthermore, I love how the Canadian ones are packaged. It's a small detail but more of the bag is inserted into the header card, drawing the head of the toy into the round part of the card, where it appears to be intended to go.

So if you want a complete Rocket Tops collection, you need four bagged specimens and then you're done? Nope, again there was more to the story than that. Next, we look to Italy where Rocket Tops were sold not in a bag, but in a counter top display box. Each box contained 24 Rocket Tops, 12 of each color.

Probably the best part about this piece is that the box flap features an image of the Shogun jumbo Goldorak!

Each side of the box simply has the name of the toy.

Again, the paint on these ones is different than the originals.

I don't know how popular Rocket Tops are in Italy, but unlike in North America, they actually received at least a minor marketing push. What follows are a couple of ads that ran in what I think was the Italian equivalent of TV Guide. Again, notice how they try to piggy back on the popularity of Goldorak.

So finally, truly, this is where the story of the Shogun Rocket Tops ends. But I found I just couldn't stop there. Whereas most of the other Shogun toys were Japanese toys re-distributed by Mattel, believe it or not, Mattel's Rocket Tops were also re-branded many times and sold by other companies. I likely won't bother doing full reviews of each one I've found, but I'll exhibit them below.

First, here is a generic all yellow version that was made in Hong Kong. I think this one is notable mostly because instead of being a Rocket, it's a "rockeR"! 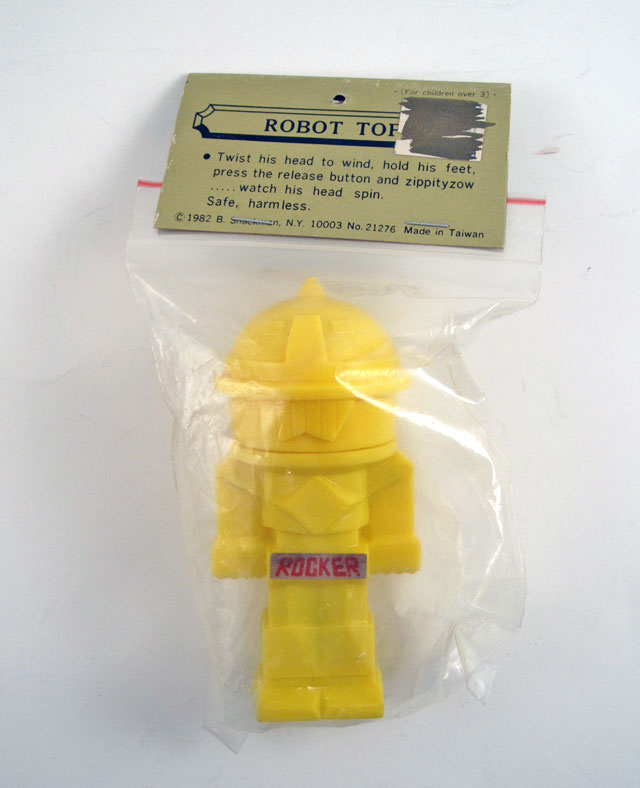 Also made in Hong Kong is another counter top display box with the very literal name "Super Robot With Whirling Head". This one features all red and all yellow versions (with silver chrome and black highlights). 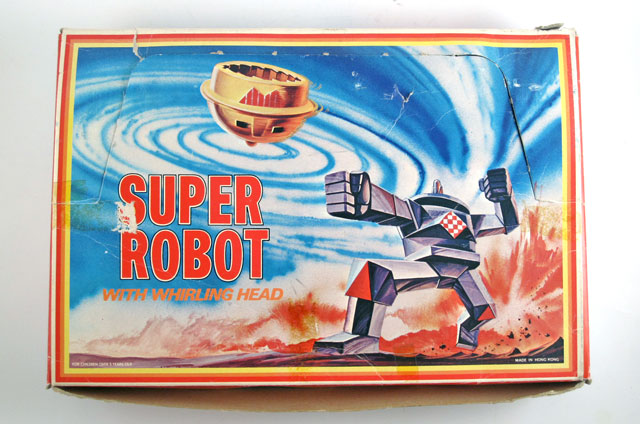 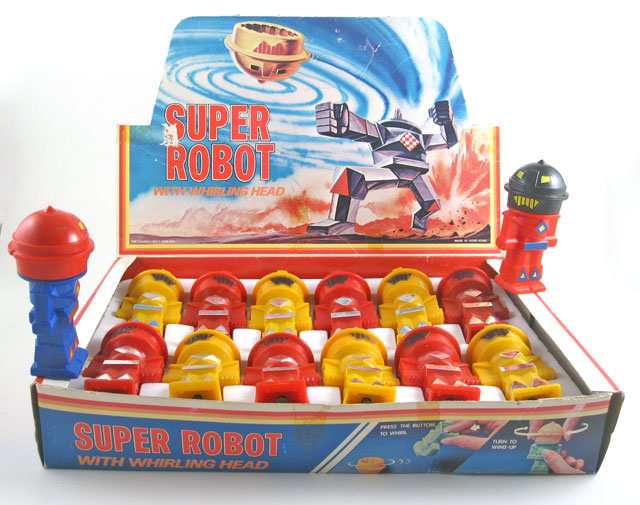 If you look at the bottom of the box above, you'll also notice one that is green with a yellow head. Well, one just like that was sold in Greece. Another color variation exists as well. Like the originals, it came in a bag with a header card. 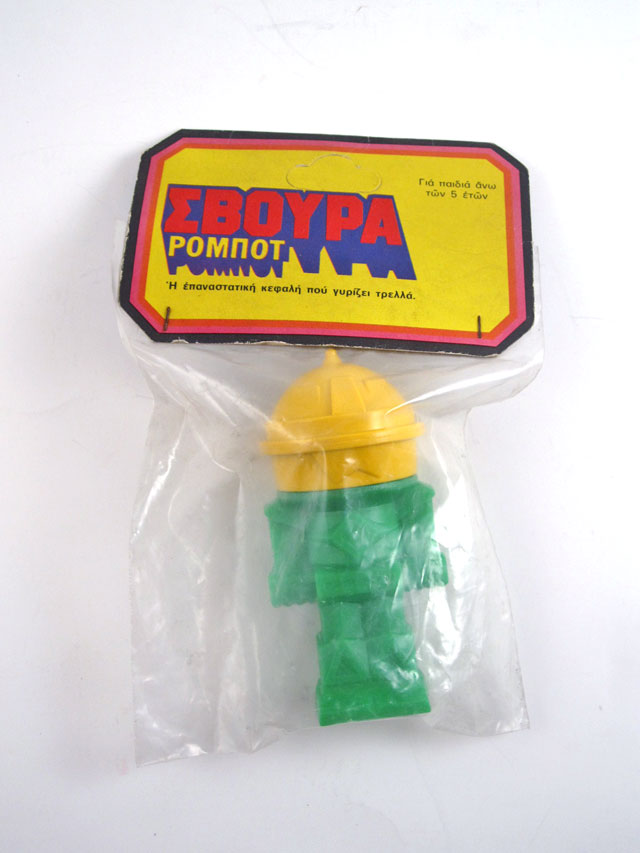 In fact, if that header card looks familiar, I think you know why. 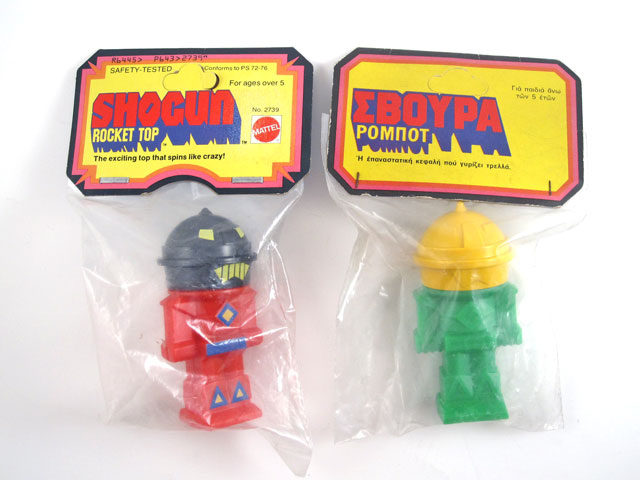 Next, we go back to Hong Kong for these carded specimens. They appear to be just like the Super Robot ones above but with the heads swapped. Also, they've upped the ante by including a flying disc that matches the colors of the heads. 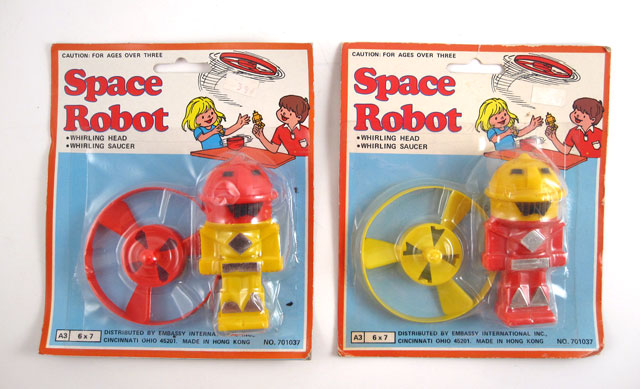 The one on the right was also packaged in the "Gooble Gang" series as "Gooble Star Robot". 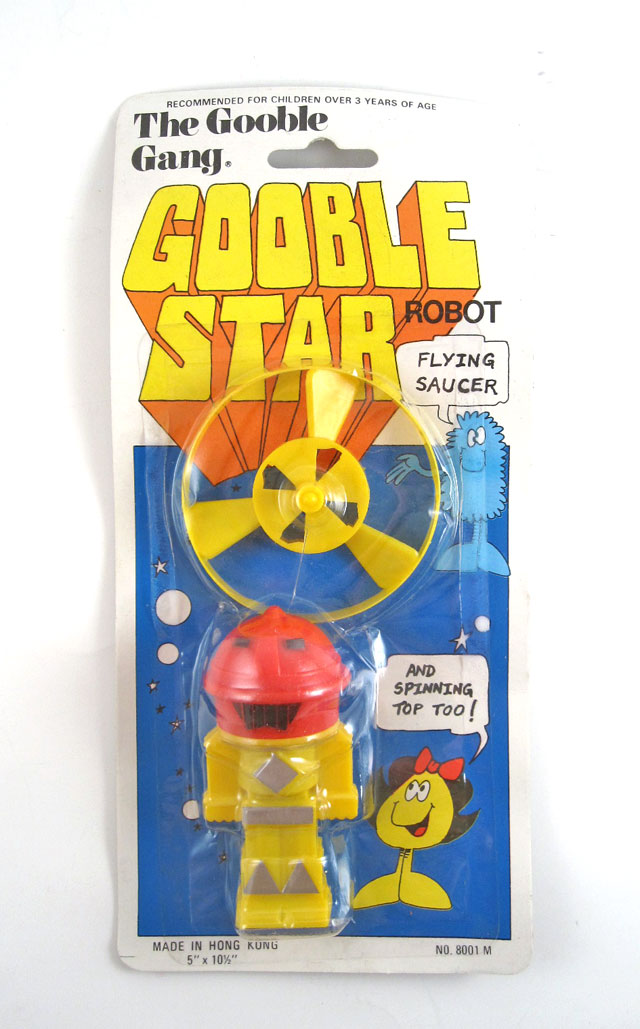 This last one is my favorite and one I never knew existed until I bought it. In 1985 Imperial released "The Jetsons Space Combo". Never mind that this one again raises the bar by including not one but two flying discs. Instead marvel at the fact that this toy, in a roundabout sort of way, mashes up the Shogun Warriors with The Jetsons! How cool is that?!? 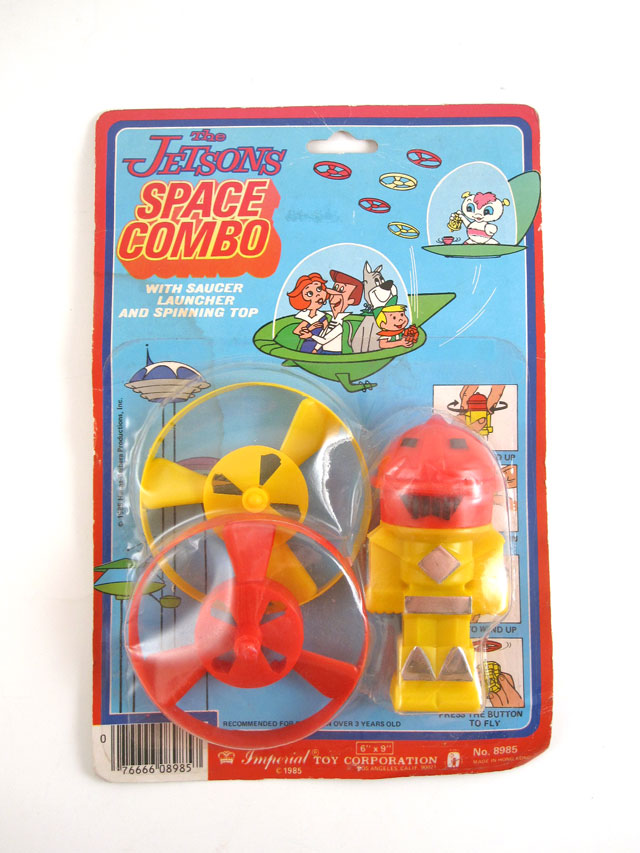 While I do hope that this becomes the most comprehensive coverage of these toys that you'll find, by no means do I believe it to be complete. I strongly suspect that there are more versions of these toys out there to be found. May the hunt never end!

Too many Rocket Tops!

2 comments posted
This is what it's all about

This is what it's all about right here. An exhaustive amount of research and dedication to an obscure an unloved toy. If there were awards for this sort of thing, you'd win one.

Well, you're the boss. Give me an award! Seriously, glad you liked it. Still got more Shogun stuff to add though.