This Billbine toy is another example of one of those toys that straddles the line between legitimate and bootleg. Let’s examine the facts of the toy and see what we come up with.

Aura Battler Billbine is a robot from the anime series Aura Battler Dunbine. I used to think that the Billbine was an enemy robot, but I have recently been schooled and learned that it’s actually the second hero robot after Dunbine. Go figure.

Back in the day, cartoons were sponsored by toy companies with the end goal of selling more toys. Japanese toy maker Clover, having had recent success with Mobile Suit Gundam, threw its hat into sponsoring Dunbine. Clover went out of business, however, during the show’s run in late 1983, and the license went to toy giant Tomy through the show’s end in 1984.

Tomy only produced two toys from the series – the 1/46 and 1/32 scale Dunbine. The 1/32 scale Billbine was big and plastic, and was knocked-off and sold in the states by Kidco and Zima. This toy is the 1/46 SF Fantasy Figure Billbine, the smaller diecast version.

Note that while produced by a different company, they kept the “SF Fantasy Figure” moniker.

The original Japanese release is much harder to find than this one. You can easily tell the two apart by the lack of the ST logo in the bottom corner, and the removal of any manufacturer’s mark on the box. The box, however, does retain the “Made in Japan” disclaimer, albeit in English.

Below - the original Japanese version 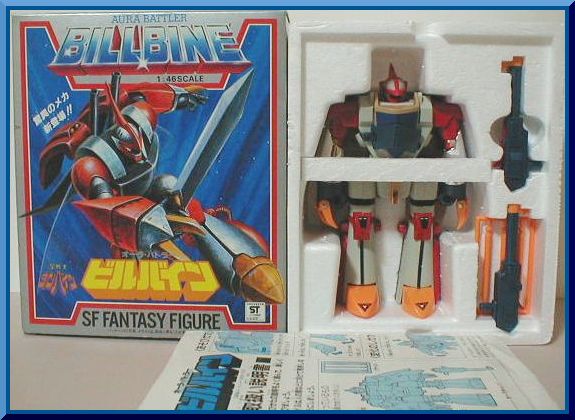 In Japan, the term “Pachimono” (パチモノの), or simply "Pachi", means “fake”. It’s close to our term ‘bootleg’ or ‘knockoff’ but it is a little broader because it can apply to original characters “inspired” by another character or genre. It also applies to outright copies.

Take the toy out and the quality is high. Diecast metal and high quality plastics give the toy a solid feel. The missile launchers are spring loaded and strong. If you had never seen the original, you would think this is it.  There are, however, subtle differences as well.

For one, the whole copyright area has been blocked off on the back. The plastic used for the beak is a different color and the red is completely the wrong shade.

If that wasn’t enough to convince you, take a look at the instruction sheet. All the Japanese has been replaced with poorly-typeset broken English.

While the quality is high, I am going with bootleg on this one. The bad English instructions, the lack of copyright, and the rich history of bootleg Dunbine toys seals the deal for me. It’s Pachi for sure.

That’s not to say it’s a bad toy. Getting the original is difficult, and this one will do in a pinch. It’s got metal, a nice box, and it transforms to a sort-of-bird mode.

I really like the look of this toy. Previously I hadn't been too fond of the Dunbine designs, but seeing it "in person" on this site it made it finally click with me.

This toy is not a knock off, but a Tomy version which was acquired when Clover folded.
Since the anime was still popular, in order to avoid manufacturing delays due to product transitions, Tomy decided to ditch the manufacturer markings. This is also an export version; hence the Engrish manual and lack of ST safety seal (which at the time was only required in Japan).

Hope this clears the mystery.