Sister collector oh I think the time has come to review another one of those Gobots.

The Machine Robo line was still going strong in 1984 when Bandai released MR-37 Harley Robo. His mostly white color scheme seemed to take a page from the common police motorcycles of the day. When the line was relaunched to coincide with the Machine Robo: Revenge of Cronos anime, he was re-released with a new number of MRB-14. 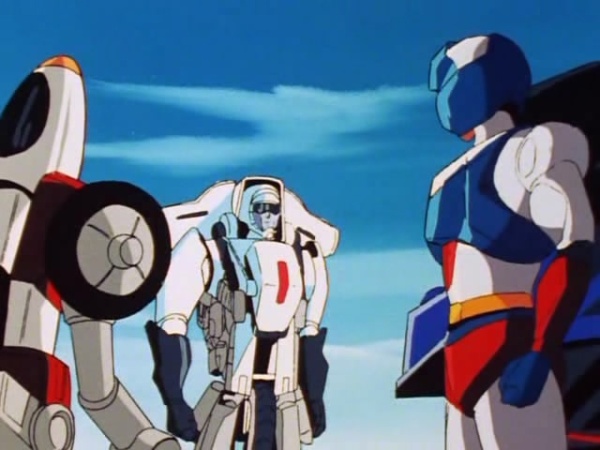 Harley showed up a few times in the anime looking a lot better than he ever did in any given episode of Gobots. Now to be fair, Revenge of Cronos wasn't produced until a few years after Gobots.

For the Gobots line, Harley Robo traded his white body in favor of blue and was renamed NIGHT RANGER!

WE'RE GOBOTIN' !
What's your price to buy?
In findin' an M.R. right!
It'll be all shipped tonight!"

Night Ranger is a mostly blue Harley Davidson motorcycle who is a little under three inches long in vehicle mode. He's really solid in this mode with all of his robot parts both cleverly hidden and locked down tight.

The engine block pieces on either side are diecast metal.

Night Ranger balances quite well on his two plastic tires. He has a pair of small tabs underneath his engine blocks that let him lean as if he had a kickstand.

A single gold sticker with the name of an 80's hard rock band adorns his windshield. The original Harley Robo had a blue sticker with his name in white letters. Both versions of the figure had a large Harley Davidson style logo just below the windshield that my figure is missing. I can only imagine some overworked intern at Tonka taking a drag on his cigarette while listening to the weekly top 40 trying to come up with another name for these weird Japanese toys when he is hit by a sudden wave of inspiration. The rest is Gobot history.

Night Ranger is one of the better looking transforming motorcycles from the 80's, especially for his size.

When compared to the infamously dodgy looking Groove, Night Ranger is definitely the more attractive of the two. Even though my Groove is a slightly off color bootleg, the genuine article isn't that much better.

Night Ranger's transformation is quite ambitious for a small 80's toy. You start by pulling apart the rear section of the motorcycle and then swinging out the diecast legs. This frees up the seat cushion which splits in two to form his arms. The next step is essential but really easy to miss as you have to push the entire rear wheel assembly up into the main body. Lastly his front wheel is rotated around so it can clip into a cavity in his chest.

While he does have some quirks like a head that is little far back, this chesty fella has enough poise and style to make up for his deficiencies. Loose Night Rangers can sometimes be hard to stand upright if their lower leg joints are loose so please be aware when hunting for one.

He definitely makes efficient use of the minuscule frame of your average motorcycle.

Nigh Ranger's face is just barely hidden under the headlight in bike mode. As far as Gobot noggins go, Night Ranger's stylized police helmet and black sunglasses make him look like a slightly friendlier version of the T-1000.

The way the front wheel assembly clips into Night Ranger's chest is both elegant and pretty ingenious. My only issue with it is that the wheel clips in there very tightly and pulling it back out is slightly worrying. Granted this toy is almost 30 years old and seems to have survived multiple transformations without a hitch. Also you got to love that winged logo sticker. It looks like it belongs on an album cover.

Night Ranger even has some decent articulation although his arms are limited by his impressive bust. He can still strut around like Mister Right.

When comparing Night Ranger and Groove in robot mode the results are...

Night Ranger is an excellent figure that hits all the marks for a great Gobot. He's compact, durable, and has a interesting transformation. He's one of the easier figures to find on the aftermarket at a good price for flight... in finding Mister Right... and you'll be alright tonight... CUZ YOU'RE MOTORIN' !

3 comments posted
I thought that the robot mode

I thought that the robot mode looked really terrible at first, and then I realized that it's basically a Gobot standing like a Jojo character, so now it's cool.

eh, i'd still take Groove over this guy.

I had the original white and black one back in the eighties. It came in a matchbox type box with Japanese branding all over it. Little did I know that it was a Go Bot o_O