During the 1980s and even up until the present day, mail order exclusive toys have been a staple of collecting and often the rarest characters and exclusive releases could only be had by sending in a few bar code's and the cost of shipping. Even obscure and unpopular toy lines had mail order exclusives.

Creepy is the only mail order exclusive from the entire Gobots line. He was originally available in the Japanese Machine Robo line, however he was made to look more like a crab and was painted red in color. He was also available in the US Gobots line at retail, however the US retail version is painted black and purple.

This Green version of Creepy was only available through mail order! How he was offered is somewhat of a mystery. There was a television commercial produced which leads me to believe that this version of Creepy was only available if you picked up a special mail order form at the Gobots display at your local toy store, or if you returned 4 Gobots cardbacks to the store they would then cough up your free Green Creepy. Heres the original commercial below:

Creepy was not a major villain in the Gobots series and actually only appeared in one single episode of the Challenge of the Gobots cartoon from Hanna-Barbera. I think the unique design of this character is what led to him being chosen as the mail order exclusive for the entire Gobots series. While he looks very cool, his transformation is one of the simplest I have ever seen for a transforming toy. All you need to do is collapse his head into the body, turn the torso a bit, then bend his knees over top. Thats it! As you can see from the behind shot, he has some extra "spider legs" that fold out in his transformed mode.

Give him a little twist

Push his head in and keep twisting

Tuck in those knees!

Despite the simple transformation, Creepy is one of the more unique characters and I prefer this mail order version's paint scheme when compared to his Machine Robo and US retail brethren. Creepy is a combination of strong ABS plastic and his legs and upper torso are diecast. Overall a very high quality Gobot that Id recommend to anyone interested in collecting the Gobots series. Not only is he a significant mail order exclusive, he just looks cool!

An Interesting fact about the mail order Creepy is that he is the only Gobot to come with an official bio. This bio sheet is actually rarer than the figure itself.

This is what the bio sheet reads:

"From the depths of the Antares Star System, on a scorched planet of soot and ash, a modified mutant emerges -- Creepy. Through a weird intermingling of metallic and living parts, this fearsome creature arises -- easily able to change from monster-robot to monster-vehicle. A welcome recruit to Cy-Kill's band of Renegades, Creepy can use his claws to snap Gobots in half, or send a lethal poison shooting out from his spider legs. The worst of all monsters to creep into existence, Creepy thrills to the sport of his deadly games. Even Renegades must take care that Creepy's power doesn't threaten their existence. Guardians -- Beware! The final conflict may be near!"

Josh Adds: I actually have the original clipping for the giveaway as it appeared in a newspaper. I didn't mail away for this personally, but I got it from a friend who did. Click on the image to see it larger 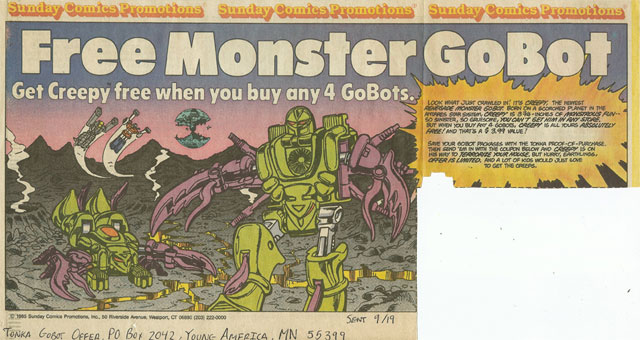 3 comments posted
How much

Compare the green version of creepy against G1 scorponok of the transformers, one would swear that it's a ripoff of scorponok. However, scorponok didn't come out till 1987, which makes you wonder if it was coincidence, if hasbro took their inspiration from this toy, if the japanese version of scorponok was already out by 1986, if tonka got wind of scorponok before it's release & rushed to beat them to the market, or........?

He looks like one of the parts of Devil Satan 6.