When people hear the name "Guts Man" two things come to mind. The first is a bizarre youtube meme that was born out of the completely inane Ruby Spears cartoon, and the second is Guts Man's infamy among fans for his incredibly tricky stage in the first Mega Man game. To this day I usually just backtrack to get the Magnet Beam rather than deal with the moving platforms that intermittently try to drop Mega Man into the abyss. It didn't help that in the first game, Mega Man would plummet at Mach speed if you didn't jump before falling. After that, the rest of the stage was pretty tame by Mega Man standards and even Guts Man himself was a more doable challenge than say Fire Man or Elec Man. Still, he did do that thing where he'd stomp on the ground which would somehow trip up Mega Man and stun lock you for more frustrating fun.

Following up on my review of Proto Man comes the other regular bad guy from the cartoon: Guts Man. In the show, Guts Man usually played opposite of the insufferably cocky Cut Man as Dr. Wily's go to guys for bumbling henchmen. True to the game, Guts Man was really strong and not too bright. Incidentally Guts Man was also voiced by another future Beast Wars alum, Gary Chalk, who would go on to play everyone's favorite munky who was not a trukk.

Unlike some of the other redesigns made for the cartoon, Guts Man didn't change that much. Aside from a new pair of sneakers, Guts Man still has the look of a Japanese construction worker that still manages to cross cultural boundaries and speak of Guts Man's talents as a "strong guy."

Like Proto Man, Guts Man is an incredibly sturdy action figure. While possessing even less articulation than former, the extremely thick ABS and PVC plastic that make up Guts Man's body is absurdly tough. You could probably give someone a concussion if you chucked this toy at their head.

Articulation wise, Guts Man's arms rotate at the shoulders with a satisfying click and his legs can wiggle around a bit at the hip joint. Due to the weapon swap gimmick, his left forearm can also rotate at the elbow for a little extra gesturing.

From the rear there isn't a whole lot going on other than a somewhat out of place lever on the toy's back. I do appreciate that they took the time to add a little flourish in sculpting this Robot Master's most memorable body part...

Guts Man's only accessory is a simple plastic fire hydrant. Now I have always found this to be pretty bizarre and would later find out this figure was supposed to come with a big block shaped like the chunks of brick Guts Man would hurl at Mega Man in the game by using his Super Arm ability. No one really knows why they decided to give him a fire hydrant rather than a game accurate big stone block but I can kind of see the logic as fire hydrants are pretty heavy so of course a strong guy like Guts Man should be able to hurl one with ease. However, I have to wonder if there was some kind of ulterior motive at play.

So hear me out on this one. The Mega Man toy line did have a figure of Rush the robotic dog so maybe someone at Bandai thought it'd be better to go for a little inter-figure synergy between Rush and Guts Man with this fire hydrant. Even robotic pets need to flush a little coolant every few hours if you know what I mean.

My theory aside, Guts Man seems to be poorly matched with his only accessory. With his extremely limited arm joints, Guts Man can only manage to precariously balance the fire hydrant between his palms in where it will usually fall out of his hands with the slightest movement. 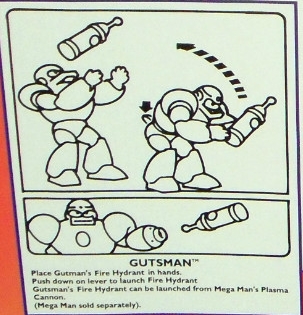 This is false advertising!

"Everything is lies... EVERYTHING IS LIES! "

The package claimed you could flick the lever on Guts Man's back to make him throw the hydrant at any wandering good guys. Needless to say all this really did was make Guts Man drop the hydrant at his feet where it may or may not roll in the general direction of his foes. That's not exactly the mark of a fearsome evil robot now is it?

Thanks to the weapon swap gimmick, Guts Man can put the fire hydrant to slightly better use as a projectile. Simply swap in the arm cannon from either Proto Man or Mega Man and insert the hydrant top first into the barrel and you've got: HYDRANT BLASTER!

Contrary to popular belief, Dog Man from Mega Man 12 is very weak to this weapon.

Guts Man's removable forearm can also be attached to other toys in the line so they can use his Super Arm ability. Sadly with the open palm hand it looks more like Proto Man just spent an afternoon browsing pictures of Layer on Deviantart than he did beating off an attack by Mega Man.

In the end these are the only two figures from the old Mega Man toy line I ever received as a kid. They have a kind of charming simplicity to them that negates their connection with that strange cartoon show. Despite his shortcomings, Guts Man is probably the better of the two as he's the closest to his original game design and is an extremely sturdy action figure. At the very least this toy will always remind me of the episode where Guts Man rushed in to save Dr. Wily from the time traveling Vile after hearing the silent alarm.

"Guts Man's removable forearm can also be attached to other toys in the line so they can use his Super Arm ability. "

Please consult your doctor for a Super Arm lasting more than four hours.

I don't want to think about Mega Man taking special prescription energy pellets to increase the power and duration of his mega buster :(

Shoulda just made the front page pic of his ass - we all woulda known who it was! If Mega Man knows dat ass well enough, then I think we can all manage.

Anyway: This is the only guy I ever got out of this series, and only because a friend didn't want him. I had NO idea his arm came off!