I am a bit of a late bloomer when it comes to my Metal Gear fandom. While I rented the seminal classic, Metal Gear Solid, back when it came out and even owned the dodgy NES port of the first Metal Gear for a while, something about just didn't click with me. For years and years I watched my friends and thousands of flash animations on Newgrounds make a mountain of in-jokes in honor of that guy who hides under a cardboard box. So I finally say down with the excellent Metal Gear Solid: Legacy Collection and played my way through the wonderfully bombastic story just as Hideo Kojima intended. Now carrying the disease, I started to quote certain meowing Russian soldiers and sneaking references into my reviews in a way that attracted some attention. A friend of mine gave me what was one of the first Metal Gear Solid action figures ever made and as we will see it is a testament to how toys...

At the time, McFarlane Toys was a pioneer in adult oriented collectibles with their Spawn figures and took the opportunity to partner with Konami and capitalize on Metal Gear Solid's immense popularity. This line started in 1999 with the headlining character being none other than Solid Snake. All the figures came packaged on a large blister card like the kind you still find hanging in comic book stores.

I feel like I haven't heard the phrase, "SMASH HIT" in a long time.

McFarlane Toys would like to remind you that Tactical Espionage Action only for ages five & older.

The back has advertisements for the full range of figures in addition to some cross promotion with their X-Files and Spawn toys.

My favorite part of the package is this cool diorama featuring Meryl and Snake that that is tastefully lit in such a way that it obscures the odd way the figures are posed.

The legendary soldier known as Solid Snake stands about six inches tall and is made entirely out of thick PVC plastic. Even by today's standards, this figure is very detailed and features a reasonably accurate sculpt.

Every cloth fold, strap, and buckle is picked out with paint detail. Snake's signature bandanna is sculpted as if it were blowing dramatically in the wind. The pouches on his belt are made of a flexible rubber material. Sadly things start to go awry when we take a closer look at the face...

Experiencing this toy about 15 years after its release, it's hard to look at this face sculpt and not chuckle a bit at how off it is when compared to how Solid Snake is officially depicted. Also he appears to have red eyes which is a bit disconcerting.

The quality of the craftsmanship that went into it is certainly quite good but we live in an age where everyone and their estranged mama knows what Solid Snake should look like.

There is a certain air of strength and dignity to this fellow's chiseled visage but again, this is not the man who fought his brother to the death on top of a giant nuclear armed walking battle tank. Although to be fair, this toy is from an era where aside from the codec screen and a few promotional images by character designer Yoji Shinkawa, Snake looked like... 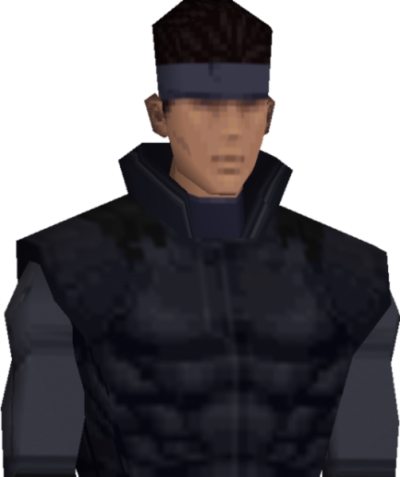 Those beautiful Playstation 1 textures may have endured in the hearts of fans but they are not the best model for an action figure.

Like a lot of McFarlane toys, Snake is designed less like an action figure and more like a statue that was cut up and given articulation as an afterthought. While his shoulders have universal joints they rotate at an awkward angle due to how they follow the contours of his body armor. His right arm has a cut swivel for the elbow that does a poor imitation of a normal hinge joint. The other elbow can only rotate around but this arm features a functioning wrist swivel. Snake's head can only turn to the right due to the way his neck sits near his high collar. The best articulation on this figure is his fully functional waist joint that can spin an inhuman 360 degrees.

He has working hips and knees but you can't really do anything with these joints as Snake lacks movable ankles and only balances a certain way. At the very least he can sit down on this convenient cardboard box that seems to be snoring...

Now this wouldn't be an Ultimate Action Figure without a accessories and this Solid Snake does comes with a good selection of gear inspired by the game. I say "inspired" because as we'll see in a bit, this equipment isn't quite up to spec.

First up is a pair of night vision goggles that are sort of like the ones Snake uses in the game. They don't seem to attach to his face in any other manner than just wedging them on and hoping they stay put.

There are little straps on the back with a simple fastener but the PVC is not pliable enough to bend inward without breaking. Even if they could, you would never get the fastener to work since it is clearly designed to be a rubber part like on an old GI Joe toy.

He also comes with a gas mask that most certainly is a gas mask even if it isn't anything like the one from the game. In fact it appears to be based on a firefighter's breathing apparatus than the more ominous skull faced ones seen in Metal Gear games. The mask simply slides onto Snake's face and over his ears where it is fairly secure.

For a sidearm Snake comes with his trust SOCOM or in this case a SORTACOM. His limited articulation allows to at the very least look like he's checking the chamber for a jam. The pistol has a peg on the handle that will not fit into Snake's stigmata'd hand without some filing down.

One nice touch is the SOCOM has a mostly accurate slide on silencer with laser sight. This cleanly attached to the front of the gun and looks the part. Unfortunately neither the gun itself nor the silencer have a hollowed out barrel so try not to look at the weapon from the front.

Possibly my favorite feature of this toy is the holster for the SOCOM. The detail work is amazing and the weapon slips securely into place every time. It's a simple c-clamp setup that works incredibly well.

On the same leg is the copyright markings dating this figure to 1999. It was a more innocent time when optical media could only hold about 700 megabytes and all animes were Japanese.

For a more powerful gun, Snake comes with a FAMAS. Aside from the general shape this rendition of the famous French assault rifle isn't very accurate to the real weapon and comes across more like what you'd see on a second tier knockoff of a Hasbro toy. The peg on the gun handle is way too large to plug into Snake's palm without some modification.

Snake also comes with this thing. I guess it's a time bomb? It's got wires and a what looks like a watch on it. Maybe this is the bomb the bad guys sneak into his gear at one point. Not that it really matters what this thing is because Snake cannot hold it.

The largest weapon in Snake's arsenal is a Stinger missile launcher. Again it's more of a scaled down GI Joe style approximation of this well known handheld anti-aircraft system but has a good amount of sculpted detail. It's hard to get Snake to hold the weapon and the rounded off handle isn't firmly grasped by his right hand. Also the trigger for the launcher's spring loaded missile tends to get in the way.

It even has the sighting device and the launcher's signature squared off antenna.

Now as I mentioned before, the Stinger has a firing missile but strangely the front of the weapon has no place to insert a projectile...

And that's because it actually fires from the wrong end. Oh McFarlane.

Clearly there was some miscommunication during the development of this accessory because Snake is apparently supposed to hold it backwards in his off hand in order to shot down a Hind D. The missile barely has enough power to leave the launcher so it's kind of a waste regardless. It's also really hard to thread the handle into his left hand which doesn't even grip it securely.

"Hey Raiden look on the bright side. At least you've still got your youth and usable articulation!"

"Snake sometimes I have no idea what you're talking about."

Until a better figure comes along (and it will), this Snake can be a decent stand in next to the more modern Metal Gear derived Revoltechs.

He does look a little worse for wear when put next to dear old Papa Snake (a paternal legend).

"Remember that in an instant, even a loved one can turn out to be a deadly foe. The Boss taught me that much..."

In the end the McFarlane Solid Snake figure is more of curiosity than notable piece of Meta Gear history. Unless you are a completest or nostalgic for the days when collector's toys were more undisciplined and raw in their design there isn't a huge need to get one of these. Well it does look quite nice (from the neck down), it doesn't do enough as an action figure and its accessories are mostly lackluster. All that being said, I am certainly thankful for having a chance to own this figure as it is a reminder of just how far we have come in 15 years.

Toys... toys have in fact changed, but I feel they have for the better.

Wow, this figure dates back to my year of birth. It's fascinating to see how toys have gone from this to super-articulated Revoltechs and SHF's

"SORTACOM." I got a real chuckle from that one.

Wow! Man, I wanted this one so bad back then. Mostly the Ninja, but this one too. I had only ever run into the clear version of him and the Ninja, so I never ended up getting them.

Anyway, love the backwards launcher! I wonder if I would have even noticed, back then. I don't think I knew as much about that stuff then as I do now.

That backwards Stinger ALWAYS bugged me. I think I chucked the missile because bleh. I wanted to love this figure so much, but the funky angles everything is sculpted at, like you said, it's basically a statue that they decided to cut up and add articulation to. All of those figures were pretty cool, I liked Psycho Mantis and Revolver Ocelot a lot, but they are far less articulated than Snake. The Ninja is probably the best of the bunch though, it's just a cool looking figure.

IIRC that time bomb is supposed to be the "timer bomb." SPOILER ALERT: after Snake is captured by Revolver Ocelot and is tortured, you can escape and recover your weapons. Ocelot places the time bomb amongst Snake's gear and you have to equip it and throw it away before it explodes and kills you.

Really great detailed review on this guy. Made me interested in a toy/character I would otherwise care nothing about.