Takara's ChoroQ line has had many different sub-lines one of wich is the Choro-Juu line. These are a series of "sparker" toys with SD-style proportions. 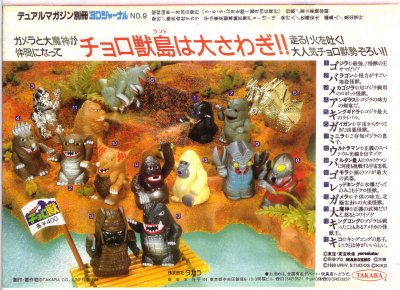 What's a sparker? It's an old gimmick - on the bottom there is a friction wheel that when you get it rolling it produces a spark out a hole in the front. The result is a safe, cheap fireworks show that's fun for the kids.

This little guy is Ultraman, but Takara released a bunch of different kaiju and heroes in the line.

Not much else to say about this, other than it exists. I don't think we had a sparker toy on CDX before, so now we do.

3 comments posted
I have a Godzilla that

I have a Godzilla that matches the photo, but picked it up sometime in the late 80's. Had to change out the flint at least twice, but it still sparks up like a champ whenever I feel the need .

Got to track me down a MechaG now that I know they exist!

Hey we've had a sparker toy before!

I have all three mentioned (Ultraman, Godzilla and MechaGodzilla) from back in the late '80's.
Found them at Eide's in Pittsburgh!