My journey into the Muv-Luv universe has resulted in many instances of stepping outside the nerdy walls I had lived so comfortably inside for centuries. Moving from the Total Eclipse TV anime to full on visual novels with the main Muv-Luv trilogy was the first step. Next was getting into the A3 figures through various Japan-based second hand shops, which opened up a whole new avenue of toy buying for me. As I often perused the listings on Mandarake, there were some items I kept seeing again and again. Their longing eyes sought salvation from the bargain bin and even my iron heart forged in the battles of Sadogashima could not keep my curiosity at bay.

If you have been following the the reviews by both Spacerunaway and myself, you may have inferred that Volks is a very strange company. The house which Dollfie built has dabbled in numerous types of products over the years ranging from robot toys (of varying quality) to trading figures, but their raison d'être has always been dolls. Be they high or low end, Volks is in the business of making angels in their ominous compound. Fresh out of the gate, the first Muv-Luv visual novel didn't have a whole lot of merchandise behind it and that makes sense given it was a completely untested property. However, Volks was there from the get go to lend a hand by producing a few Muv-Luv products as part of their Ultimate Figure Series. What you are about to see is one of the very first toys of this fledgling franchise.

And yes, the Ultimate Figure Series is a line of dolls. 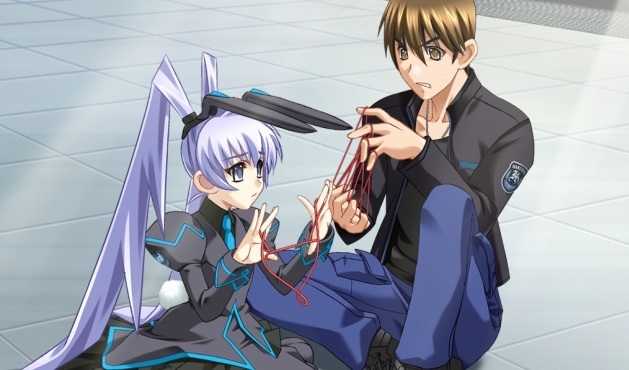 Takeru tries to teach Kasumi the fine art of cat's cradle. I swear he's much better at piloting a Tactical Surface Fighter than he is at playing with string.

Yashiro Kasumi first appears in Muv-Luv Unlimited and is one of the few new characters unique to this alien invader besieged alternate reality. She is a soft spoken young girl who ends up being one of Takeru's most trusted allies as he tries to save the world from the BETA by helping Professor Kouzuki Yuuko complete the Alternative IV project. Kasumi herself is a remnant from the Alternative III plan in where the Soviet Union attempted to communicate with the BETA using specially bred humans who possessed telepathic abilities. Hundreds of Kasumi's "siblings" died trying to extract useful information from an enemy that didn't even see mankind as "alive."

Kasumi sometimes comes across as a little creepy due to her ability to know what people are thinking but still she is well mannered and eats her carrots at dinner time.

This 1/6 scale Yashiro Kasumi is one of three Muv-Luv characters released in the Ultimate Figure Series. The other two being main heroines Mitsurugi Meiya and Kagami Sumika. Out of the three, Kasumi is the only one dressed in a military uniform (well her version of one) and is explicitly from the BETA invaded world. As far as I can tell this figure was released in 2004 which is around when Japanese gamers started to unlock the Muv-Luv Unlimited portion of the visual novel so this did avoid spoiling the surprise a bit.

As a you can see, this figure is quite large. It is easily the biggest Muv-Luv piece I own at this point. Volks has done numerous anime and video game related dolls so Muv-Luv fits right in. The main figure comes packed with two baggies floating around unsecured inside the box.

Kasumi herself is anchored to the inner cardboard sleeve with a pair of soft elatic bands. One of them is unsettlingly wrapped around her neck.

The box has a picture of Kasumi as she appears in the games. Quite literally as that is just one of her various sprites from the visual novel. The picture is useful because it provides a clear contrast between what the character should look like and what you just bought. Also the box notes Kasumi is a 1/6 scale game chara doll d-brand. Quite an impressive title.

The side of the box proudly proclaims Kasumi is part of the Ultimate Figure Series.

There is also a label saying this is part of Volks's ORIENT HERO SERIES.

While the back says FIGURE SCENE.

And that it is from "The Ultimate Figure BOUTIQUE." All of these different labels confused me a bit. It's like Volks doesn't know what they want to call these dolls.

The figure itself was made in Japan, which given Volks's reputation as a doll maker should come as no surprise.

While searching around the box I found the original MSRP of 14,800 yen (15,540 with tax). I did not pay this amount for the figure so I can only imagine the reaction of someone who did so back in 2004.

Sliding the cardboard backing out of the box lets you see the full contents of the package. Aside from the main figure you get a set of flesh colored parts meant to fill screw holes in Kasumi's doll body, a set of character specific items, a sheet of unit patches, and instructions. Unlike other Muv-Luv toys, Kasumi does not come with assault cannons, mount pylons, or even a hair brush.

The unit patches are printed on a rough feeling paper sheet and need to be cut out and attached to her uniform by the buyer. The bunny ears need to be carefully glued together and threaded around her twin tails. Also I swear the Kasumi pictured looks a lot nicer than the actual product...

Kasumi is about a foot tall like most 1/6 scale figures. As she is rather short in the game, I don't think the generic body Volks used reflects what Kasumi's actual height would be at one-sixth the size. She has a fully articulated plastic doll body underneath her clothes.

This Kasumi's face isn't particularly accurate aside from the color of her eyes. The rooted hair is adequately styled like it is supposed to be but looks rather frizzy and does not have the "anime" sharpness of the game sprites. The head itself is made out of a soft material.

The cloth outfit on this figure is again, only an adequate representation. It is a decidedly low end doll-like approximation of Kasumi's uniform but does have most of the important details like a small tie and the blue trim.

And it has her UN Army approved cotton tail. Sadly the tail is not especially fluffy nor does it look like anything other than the end of a Q-tip.

I do have to give them some credit for attempting to replicate the more intricate design of the cuffs' trim.

Kasumi's shoes are made out of a faux leather material with foam padding barely masquerading as soles. Now I know it would be rude if she entered my house while wearing shoes, but honestly I would take improper manners over trying to actually fit these on Kasumi's feet. Getting her shoes on is a trying affair as the excess material inside the heel tends to bunch up against her stockings.

Her very important bunny ears (actually a set of ESP related equipment) are made of unpainted black resin which must be cleaned up and assembled. Putting the ears on the headband is easy enough as they just peg into holes, but uniting the two halves of the base together is kind of baffling. There is one tiny tab that goes from one part to the other but does not physically connect the two, it merely sits underneath. I am not sure if I'm suppose to glue these bits together while they are sandwiched around her hair (and not get any glue on her precious locks) or assemble the whole thing first and thread her twin tail through afterwards. In the end I just used a bit of clear tape to keep it together because this my dear readers, is budget moe.

Here is the fully equipped Kasumi. Even with shoes on, she cannot really stand on her own as that big head makes her quite top heavy.

This is in sharp contrast to the Age Ultimate Characters Collection Yashiro Kasumi (part of Volks's Model Of Entertainment Collection series), who can stand with or without her display base. Volks can do a character right but only the second or third time around.

As I mentioned before, Kasumi is fully articulated but her thick clothing prevents her from doing much even when supported by a stand. Also her ankles especially like to pop apart while posing. It can be irritating to get them back together as her ankles are under cloth coverings. However, it is not as bad as the late CM's Corporation's Patlabor figures.

At the very least you can get Kasumi to sit down on her knees and bring her hands together.

Kasumi is very respectful to all of her friends at Yokohama Base and wishes them well.

"Aaraa... Yashiro! Did you play too close to the experimental enlarging ray again?"

Please enjoy the full range of Muv-Luv products made by Volks.

As a company, Volks is more well known for its high end dolls than it is for their smattering of anime and game related products. Anything that isn't a thousand dollar Dollfie Dream is eventually relegated to clearance bins.

However thanks to fellow reviewer and Volks enthusiast, Spacerunaway, I am able to show that even CollectionDX can be "the place your angels are" and give the Kasumi doll a little recognition as one of the first Muv-Luv products. 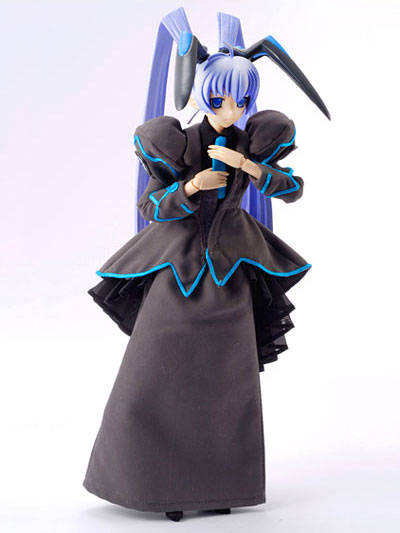 Later on Volks would start to revisit the Muv-Luv cast with much better dolls that featured more accurate sculpts and molded hair that captured the look of the visual novels. 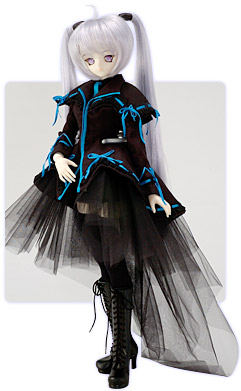 They also did a high end Dollfie Dream Kasumi with a more stylized Gothic Lolita outfit.

In the end the Ultimate Figure Series Yashiro Kasumi is a curious item from the earliest days of Muv-Luv. It isn't a particularly exciting piece nor is it well executed (you would think Volks could do a doll right), but I feel a little enlightened after having a chance to handle this figure. I saw this Yashiro Kasumi at Mandarake for 3,000 yen, which is my around my threshold for trying something different through Japanese toys so I took the plunge. I have seen several of the Mitsurugi Meiya figures pop up for around 3,000 to 4,000 yen so it appears these do not hold their value at all. For those Muv-Luv fans more into dolls, this may be an interesting bit of history but is not one you should seek out for lest it has a heavy discount. With my curiosity satisfied, I will turn my attention back to some of Volks's other fine products.

2 comments posted
I thought this was April

I thought this was April Fools joke at first.

You know I take everything seriously （￣へ￣）