It is really surprising to me that it has taken this long for me to get any kind of Street Fighter action figure.

See, I was slightly insane over Street Fighter II (Called SF2 from here on in).

Back in high school, we all used to hang out at this little arcade called Mr. G's in Pelham, New Hampshire. The small, one room arcade was on the second floor of a strip mall, above a rental center and next to a gun shop. In this place, Mr. G had placed a few coin operated pool tables, and maybe a dozen video game cabinets.

It was in this arcade that I was introduced to Street Fighter II. Not the turbo edition, just straight SF2.

The four or five of us began playing the game, and each of us began gravitating towards specific characters. Jeff was into Chun-Li, Bill liked Guile, and I was a big fan of Ken. In those days, there were a lot of arguments as to who was better, Ken or Ryu. I liked Ken's power, but Ryu had speed. If you played one, you could play them both, but there was a subtle art to mastering each one.

Jeff and I formed quite a rivalry with his Chun-Li vs my Ken. We knew each others moves inside and out, and our matches were lightning quick, and fairly even.

With the introduction of Street Fighter 2 Turbo we kicked it up a notch. We began going to different arcades like Fun World in Nashua and Grand Prix in Tewksbury. These arcades were the hot spots on Friday and Saturday nights, and people would get in line to play. Quarters would line up to assure your place in the queue. If you were good, like we were, you rarely had to pay for more than one or two games.

After a while, you began to notice regulars. Other people would hop from arcade to arcade, looking for challenges. I remember this one guy who was really great with Blanka - he could annihilate anyone.

I remember perfectly good dates ruined by the introduction of street fighter machines. I really didn't want to beat them, but I couldn't help myself. I was addicted to Street Fighter.

Years went on and various incarnations of the game came and went. We were super excited to get SF2 on the Super Nintendo - that wasted countless hours. Arcades were still the way to play but we found that younger kids were coming into the arcades and handing us our asses. 10-year-old Cambodian kids at that little arcade on University Ave in Lowell would kill us, usually by playing cheap, but it was an exercise in frustration.

Other fighting games came and went, and we tried them all. Dark Stalkers. Marvel Vs. Capcom, Virtual Fighter. Mortal Combat. But none had the allure of SF2.

On my first pilgrimage to Japan, one of the things I had to do was go to a Japanese arcade and play Street Fighter II. I ended up in a giant SEGA arcade, floors upon floors of smoke filled arcade games. And then I found it - the row of SF games. I sat down at a vacant one, because I was too intimidated to challenge a Japanese player. I dropped in my 100 yen coin, and began to play.

I got my ass kicked. Either this Japanese machine was set to super hard, or I had lost my touch.

That was the end of Street Fighter for me. I had come full circle - from being a teenager in and arcade in New Hampshire to playing the game in the motherland. I could go no further.

So what does this all have to do with the Revoltech SFO Ryu? Not much. I just thought I'd give you a little background about my relationship to the Street Fighter franchise.

This version of Ryu comes from a unique on-line game called Street Fighter Online Mouse Generation. This Japanese game has slightly revamped versions of some classic characters plus all-new fighters. One interesting twist to the game is that your characters are actually Revoltech figures - joints and all. 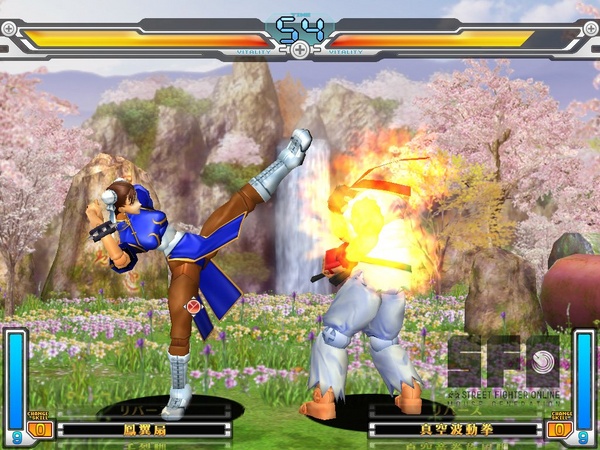 I've never played it, so I don't know if it is any good, but I can't imagine it is.

Still, it looks basically like Ryu, maybe a bit more muscular. The traditional elements of his outfit are there including gloves and headband.

Poseability is great, and you can get off some serious moves.

Included are variant hands for different attacks, and also a flaming ball of HA-D00-KEN!

The included stand is different from the traditional Revoltech stands, but it works great for this figure.

In all, I think this is a neat figure, but some may prefer the larger size and detail of SOTA's version. If you are a Revoltech fan and you collect the line, this will be a welcome addition to your collection. Just be prepared for the wave of nostalgia to hit you if your relationship with the game was anything like mine.

You can get your Street Fighter Revoltech Ryu at HobbyLink Japan

10 comments posted
You know how you can tell

You know how you can tell you're going to get your ass beat? When they don't grasp the joystick,they just sort of place their palm on it with their fingers still flat out. Then they put their fingertips on the punches anbd their mid finger articulation on the kicks,and you just know you're f****d.

Anyway these days I like King of Fighters and Fatal Fury a lot more,but damn SF II was awesome when it came out.

I've got the the old Bandai Spiral Zone Ryu from way back. I need to dig him out for comparison. He was more than a RT figure costs (quite a bit actually) but the cloth outfit and cardboard diorama of his stage offset the lame gloves and headband made from stickers. His posing ability was pretty good though considering the superb SZ body.

There still hasn't been a really great line of figures for SF. The old Resaurus ones are regarded as legendary and command exorbitant prices, but having owned (and subsequently sold) most of them, they weren't that great outside of a few standouts. Even the best of them were just good statues since their posing ability was limited to wonky articulation that took a back seat to the looks.

The SOTA ones were pretty good and basically took the style of Alpha and made them more posable, but they were still not as good as I'd like with articulation.

There are a few other ones that were either PVC statues or Microman variations, which were ok but never got more than a few characters making a true SF line still elusive.

Hopefully Kaiyodo will continue on into SFIV and make all the world warriors.

I don't remember them being released, I would love to see a picture of one if you still have it.

I'll be interested when E Honda makes an appearance..

Yeah I would love a E. Honda and Sagat.

Anyone have any pictures of that Spiral Zone Ryu? I'd like to see it.

The head sculpt isn't too hot (well, I never played the new one... I just know Ryu's head present in all previous incarnations.) Maybe it's accurate to the specific source, but it's not the Ryu's I've loved for 17 years. It looks more like a slightly modified head from the American Indian character in Super Street Fighter called "T.Hawk".

The arms and hands also... way too massive in my opinion.
It seems odd too that his hands can't pose (or come with removable ones) into his trademark fireball move.
I'm wondering also if the fireball the figure came with is actually that small in the game. It was significantly larger in SF2 and only grew with each different incarnation.

The figure, being Revoltech, of course looks like tons of fun to play with. I really gotta' commend them on using such an ingenious marketing strategy.
A game.
With your figures 100% rendered.
BRILLIANT.

Not the figure. I love it. I just think its a shame my favorite SF character was from another game, Rolento...

Ha! Josh, I'm sure there are plenty of dealers out there that sell the real deal arcades, but I just was checking a couple out at a dealer's site, www.flippers.com. Man I gotta load my truck up one day, and bring one home!