Meiya Mitsurugi is one of the characters in the Muv-Luv who perfectly exemplifies the parallel dimensional nature of the story. In one world she is the heiress to the powerful Mitsurugi Zaibatsu whose incredible wealth and squad of ninja maids makes her like the anime equivalent of Richie Rich, while in the universe under siege by the BETA she is a cadet at the UN base in Yokohama who carries the burden of being a relative of the Japanese royal family. No matter the setting, Meiya's core character remains the same as she is an intelligent, disciplined, and well spoken individual who is seen as highly dependable by her friends. 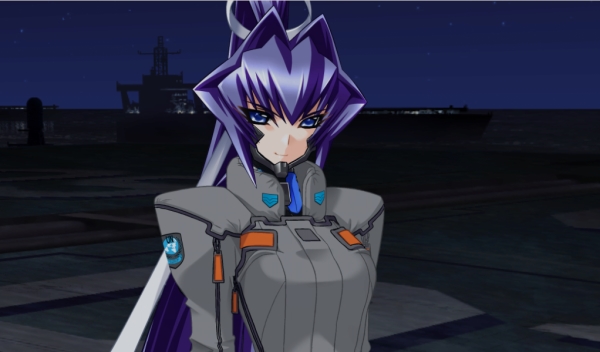 As one of the main heroines in the visual novel trilogy, it was only natural Meiya became the first Muv-Luv character to get a figure in Max Factory's Figma line. With more than 200 Figma released at the time of this review, it's interesting to go back to a time when Max Factory was still cutting their teeth on making more than just Vocaloids, baseball mascots, and B-list Japanese celebrities.

Meiya stands roughly roughly six inches tall and is clad in her Type-99 Fortified Suit. Throughout the course of the story, she wears three different styles of suit with this being her standard issue attire as a commissioned officer. The paint and detailing on this anime style sci-fi outfit is quite good and this particular outfit matches Meiya's cool blue hair color very well. The gigantic white ribbon in Meiya's hair is accurate to the character but is sculpted in such a way that it tends to hang too close to her body.

Unfortunately Meiya does not stand up very well on her own. Her lack of ankle tilts and massive angular ponytail makes her very tipsy on her feet not unlike if she had a little too much sake to drink.

Meiya's default expression is a stern looking face. While it's not particularly flashy, this look is quintessentially Meiya. The shading on her hair is alright but feels a little overdone. If I had to find fault with the figure, I would have to say the face sculpt is perhaps a little too accurate to the game sprites as it perfectly captures the minimalist styling most of the characters possess.

It's quite a feat to see a plastic figure replicate the common anime effect of a character's nose being nearly invisible from the front but clear defined in profile! Here you can also see the single movable joint in Meiya's humongous ponytail that allows you to make her even more top heavy.

Her left shoulder has an equally authentic emblem of the Special Task Force A-01 "The Valkyries" (or Valkylies as it is written). It also has text for the ALTERNATIVE IV plan, which the Valkyries are sworn to protect. As I dutifully respect the PG-13 nature of the website I have censored the anatomically correct image of a Norse deity. For the sake of properly documenting the figure, an uncensored picture can be found here. Just don't blame me if the sight of tiny pixels gets you into trouble at work.

Meiya's only other face show her shouting in a hot blooded manner befitting the pilot of a sixty-foot tall giant robot. Again there's not much too it but it fits the character.

Swapping her faces is pretty simple as you just remove the front part of her hair and then slot the desired face over a tab. I found on my figure that the hair piece is a lot looser when the default face is used than it is with the shouting face.

The unintentionally funny result of this gimmick is you get to examine Meiya's infamous bangs as a separate entity. While many of the female characters in Muv-Luv have these "hair intakes," Meiya's bizarre four pointed follicles illicit equal amounts of delight and confusion from those who see it. I have seen cosplayers attempt to replicate it but no one has been able to capture the maddening majesty of this hair.

According to lore, Meiya's hair is said to be based on an "A-P bazooka equipped Gundam." I wonder what they mean by that...

Like all Figmas, Meiya comes with a little plastic holder for all of her extra hands. She has a pretty standard assortment that includes two right hands for holding her sword at different angles, two calm hands, two hands with splayed fingers, two fists, and a hand for gripping her scabbard.

While I managed to find an unopened example of this toy, one of the wrists was broken while the hand was still on the holder. Fortunately it was just her right fist which I am not going to use that often as Meiya holds her sword with her that hand. This kind of break is potentially fixable so I'm not completely morose about it. Still it is pretty irksome especially when I managed to get a "new" figure.

As a member of the Mitsurugi family, Meiya carries the "Minaru Kamui" katana. It can be stored inside a red plastic scabbard with painted white ribbons. The hand designed for holding the scabbard does not do an adequate job and the sword will often slip out during posing.

Like every Figma, Meiya comes with the standard clear stand that neatly plugs into her back. Despite the figure never being opened, the stand has taken on a slightly brown hue to age.

A bunch of pictures on the figure's box show Meiya casually balancing her sheathed sword by the tip. While this is certainly doable, it's a very precarious affair that is meant for a quick snapshot rather than a permanent display. Meiya's big hair ribbon can tilt from side to side in a meager attempt to get it out of the way. Also I want to point out that the box pictures are straight up lying because there is no way Meiya can achieve this pose unaided.

This Figma is able to achieve Meiya's signature pose but not without some effort. The main problem is all of her different hands fall out very easily because the wrist pegs are too short to get a good grip when plugged into her forearms. None of my other Figmas have had this issue and it's frustrating when trying to set Meiya up in a particular way. It also doesn't help that her elbow joints are quite stiff so I would often pop the hands out when trying to move her arms. The thing is this figure looks really good once it is set up properly that it makes it worth the hassle.

If you grit your teeth and bare it, Meiya can be posed unsheathing her sword from its scabbard. Unlike with Yui Takamura, Meiya's full sword actually slides into the scabbard. There is enough room in there so that there shouldn't be any paint scraping, but I'm sure it may happen if you do it enough times.

Both of Meiya's hands designed for holding the sword really have a death grip on the blade. It's a little nerve wracking the first time you attempt to slid her fingers around the accurately molded handle and hope no paint comes off in the process. One hand holds the sword perpendicular to her arm while the other has a more offensive angle.

The Minaru Kamui is a rather large and intricate looking katana. The handle is authentically sculpted with ribbed surface for better grip with little white diamonds painted in between the woven purple detailing.

The painted gold hand guard even has the Mitsurugi family crest molded on top.

With proper care, Meiya can wield this weapon in a positively imposing manner.

As an action figure, Meiya has a good range of motion in all of her joints. While she isn't super dynamic, she can still handle her sword with a good amount of grace. The only real issue I have is that giant inflexible ribbon that hugs way too close to her body. The plastic it's made from isn't designed to bend at all and is permanently sculpted so that it hangs down right where it doesn't need to be. Fortunately if you move it out of the way, Meiya can turn her head left or right and even up and down slightly.

With the help of her stand, Meiya can better show off the range of her articulation. Almost all of her major joints bend at least 90 degrees using the standard hard plastic Figma joints. Her upper body can move around via a chest joint and her feet can move up or down at the ankle. You can have Meiya leap through the air with her sword but doing this always feels kind of wrong to me.

To be honest I've always felt Muv-Luv has had a bit of an image problem (I mean other than the cheesecake) when it comes to its character action figures. Fortified Suits are eye-catching and all, but they're just worn when the characters pilot their giant robots. Meiya never runs around brandishing her sword at aliens when dressed like this and the one time she did have her sword with her while out in the field she just stood silently with it in quiet meditation. 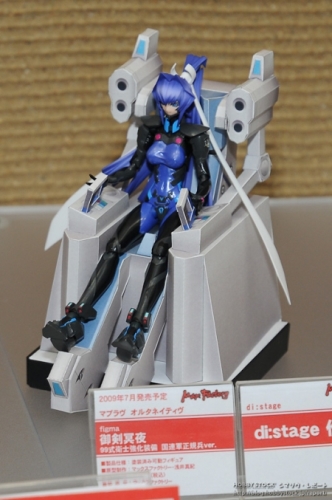 This isn't a slight against the figure itself, but I really wish Max Factory had included some kind of cockpit for Meiya to sit in or at the very least released this papercraft setup they displayed at a trade show years ago. The recent Nendoroids of Cryska and Inia came with cockpit chairs but those definitely will not fit a Figma.

Again despite my griping, the Meiya Figma looks amazing and exudes an aura of strength and dignity despite the inherent ridiculousness of her outfit.

And let me tell ya, Muv-Luv is a world of serious business and silly outfits.

Overall the Figma of Meiya Mitsurugi is an beautiful piece that has some irritating flaws. Most of this can be chalked up to the age of the figure as it came out a few years before the likes of Yui Takamura and Cryska Barchenowa. Sadly this figure has also gone up in price due to its age and commands at least double its original 2,666 yen MSRP. I got this Figma for about $45 USD from Mandarake. As a fan of the series and a fan of the character, I think that's acceptable given the almost four years since it came out. Meiya's prominent position in the story means she's very popular among fans which also adds to the demand this Figma carries with it. Still if you are a fan of Muv-Luv and want something more than a fixed posed figure of Meiya, this is a good buy.

Seems like a decent enough figma. I was expecting a much worse face sculpt then that, so I'm a bit pleasantly surprised. I do think Meiya drew her sword in that outfit in one opening for Muv Luv Alternative for the PS3, but that's about it. Still, what other accessories are you going to give her? A little "Game Guy"?

It's truly a wonderful thing!