As mankind is embroiled in an endless war with aliens, one young man finds himself reliving the same events over and over again until he discovered a way to save humanity from a slow, painful death... Find out more in Yoshimune Kouki's All You Need Is Luv.

A quick glance at all the various Muv-Luv merchandise out there can make it hard to get a handle on just who or what the series is about. There's a ton of sweet robot toys and female figures (in all kinds of outfits) but if you wanted a representation of the main character, Shirogane Takeru, it's hard to find much of anything. While jelly lieutenants and little rats can each get a few figures, the most important character was given the short end of the CIWS. It probably doesn't help that as the lead in a visual novel you don't get to see Takeru that much due to the first person perspective. However, in the various in the manga adaptations our plucky hero gets a lot more face time. 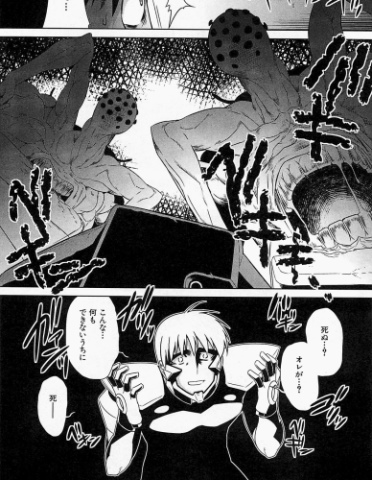 Oh and I suppose he was also in Akane Maniax for about a minute.

Volks, the ambassadors to all things Muv and Luv, tried to rectify this deficiency by releasing a trading figure of Takeru as part of their âge Ultimate Characters line. For me, finding one of these on the aftermarket was a bit difficult as he rarely popped up by himself or at a reasonable price. Luck was on my side though as I was able to get Takeru with the matching Sumika figure from a Yahoo Japan auction. Normally I wouldn't review a single blind box item like this one but Takeru's unique position of being the only mass release male Muv-Luv character figure ever deserves some recognition.

So here is the bratty savior himself standing about five and a half inches tall. Like most trading figures, Takeru comes with a base to help him stand up.

In his case, this is entirely unnecessary as the sensible footwear on his standard issue fortified suit give him a solid stance.

The male use fortified suits worn by UN pilots are the most plain out of the bunch with the only splash of colorful skintight protective material being in the torso.

He's quite well sculpted overall with his face being a decent representation of Mr. Bowl Haircut Everyman. Takeru's eyes are looking slightly to the left as he is ever vigilant in this time of war.

The rest of his body is very detailed with all the important parts of his attire lovingly rendered in PVC plastic. I especially like how his shiny physique enhancing body protector came out.

You too can get these amazing abs by spending eight minutes a day piloting a flying alien killing giant robot.

And Takeru's got a nice butt too.

While I bought my Takeru loose, I do have one of the boxes from the wave of figures he belongs to. There were five sets of âge Ultimate Characters released with 04 being the last one. The odd one out was the "1.5" set of the main gang in their training outfits. The final wave contained Shirogane Takeru, Yashiro Kasumi, Kagami Sumika, Isumi Michiru, Kazama Touko, and Munakata Misae who rounded out the ranks of the Valkyries special task force.

The sides of the box have pics of all the figures along with a profile shot from their in game sprites.

When looking at the official game art next to the figure, it is hard to ignore some dependencies between the two. However you rarely saw Takeru's sprite in the visual novels and even if you did see him it was usually a scene specific picture where his design never stayed consistent. As a result, a lot of artwork of Takeru can look like some other dude. One thing I can tell you though is that he is not Yuuya Bridges.

Or Wilbert D. Collins for that matter.

The back of the box shows off the full range of figures and even features from cross-promotion with the PC game and A3 toys. Volks is keen to maximize advertising space.

Oddly enough I've managed to collect one half of this wave through sheer coincidence. The hexagonal bases work well together for display.

And you can recreate all your favorite moments from the story!

"Hey Kasumi! Remember to eat your carrots at dinner time!"

Takeru and Professor Kouzuki are saving the world while wearing the silliest outfits imaginable.

While Takeru is one of the taller figures in the set, he ends up being around the same size as Figma Sumika.

"Wait a minute Sumika, how did you get taller? And where is your other hand!?"

"Ehehehe~ Oh Takeru-chan you've been working out haven't you~"

They really are a cute couple.

For me the âge Ultimate Characters line have been fun to collect although it can sometimes be difficult to find a specific one. Takeru seems to be the most elusive of all, popping up infrequently at auction sites and secondhand stores in Japan. My affinity for the character and the sheer novelty of a male Muv-Luv figure made finding the bratty savior a priority as I'd peruse various web shops. These figures originally cost 880 yen each and their aftermarket prices vary wildly based on which character you're trying to get. As a general rule I would not pay more than the equivalent to twice that for one unless you really like the character. I found Takeru in a auction along with Sumika for 3,000 yen and I definitely think that was worth it the asking price as sometimes a collection needs is a little luv in between all the giant robots.

My first thoughts on seeing this figure (forgive me):

"Finally! A Muv-Luv character with a plausibly sized bust!"