Datas is a character in the 34th Super Sentai show, Tensou Sentai Goseiger. I’m not Eva Unit 4A, but here is a description of the series from him:

“The Gosei Angels are beings who have secretly defended life on Earth for thousands of years, lead by Master Head. While human in appearance, they are usually not seen as they move among us. The road between Earth and Gosei World is Heaven’s Tower- a massive structure which hangs upside down from the clouds. Unfortunately, an empire of aliens, called Warstar, has chosen Earth as their next target, and they have destroyed the Heaven’s Tower in a preemptive strike! Now isolated on Earth, five Gosei Angels-in-training must learn to cooperate with each other, and bring the powers of their three tribes, Skick, Landick, and Seaick, together in order to defeat Warstar, as the Tensou Sentai Goseiger!

Headders are life-forms that appear as the flying heads of animals. When united with a robotic body, they become mecha known as Gosei Machines. The Goseiger each have access to one default Headder, representative of their tribes, but when needed, the Gosei Machines can combine into gigantic humanoid warriors to fight the minions of Warstar.”

Does he look like he fits in? To me he looks more like he belongs in Robocon than Super Sentai.

The box is suprisingly sturdy, much more solid than the US Power Rangers releases. 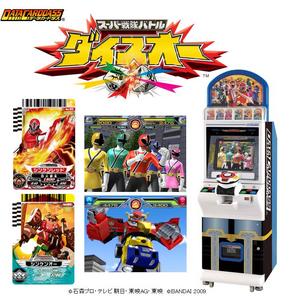 There’s a reason for his appearance. He’s modeled after a Cardass machine, a series of video game machines in Japan. These machines are activated with playing cards that are included with each toy in the Goseiger series. The player slips their card into the machine to begin playing the game with that character. This particular machine is the “Super Sentai Battle: Dice-O” game.

In Cardass mode, you can turn on the switch in front and he makes a noise when activated. Turn the dial on the front to hear an assortment of phrases from the character, none of which I understand.

The display is simulated by sliding one of the Data Cards into the slot on the left. There are two cards included.

In this mode it is a block. Besides the sounds, it does nothing, but you can transform it and get…

Kawaii desi ne? Look at those eyes! Three sets of eyes are represented on the cards, and all you have to do is slide in a card to change his expression.

To transform, simply fold out the arms on the sides, and pull the legs down and out.

The sound effects remain unchanged in this mode. The only articulation here is in the arms.

To transform into Datas Hyper, fold the top of the robot down and place the Headder on the connection point and unfold the sides. A sound will ring out, and then you can unfold the longer arms and attach the bottoms to the legs.

In this mode Datas Hyper has a different set of sound effects. Other than the sound, he has no action features. As the Goseiger toys are all designed to be combined together, if you have other toys from the series you can combine for even greater modes:

Unfortunately, as I don’t collect Goseiger, I don’t have any of these toys. Click on the links above though, and you can see the craziness you can create.

On its own, it’s a neat enough toy. I mean, how many transforming arcade games are there? The real value is what it adds to your existing Goseiger collection. If you have the other toys in the series, this is a no-brainer.

You can get your DX Datas Hyper at HobbyLink Japan

meh,it doesn't look enough like a regular arcade game to me. The day they come out with a Pac-Man or Street Fighter II I'll be all over it.

I know we have tons and tons of video games where fighting is the thing that happens, but a video game machine doing the fighting? Ordinarily that might sound cool, like something out of Transformers, but-- no, no. Uh-uh. I refuse. You might be able to drag this particular horse to water, but I refuse to drink this putrefied infected purple sludge.

This is NOT a Super Sentai toy even though it says it is on the box. There have been some unusual transformable helper mecha in the past- paper lantern, robot ninja-in-training, race car tire- but this one takes the cake as the one that has had the least amount of support from the fan base. And I count myself among them in that opinion. It's a POS devoid of spirit because he's so dammed annoying both as a character and as a toy, and two of his modes are dependent on a series-wide gimmick (Headers) which rendered the line neutered and highly detestable. The only good part of the line- collectible cards that are read by the toys as well as real arcade machines- was completely overshadowed wasted here. (Just typing the name "Hyper Gosei Great" makes me sick to my stomach...)

This is a shelf-warmer in the strongest sense. I shouldn't really have any say in the matter because I am obviously outside the target demographic, but do NOT get this thing. I was given the opportunity to review it, and I told Josh I wouldn't touch it because I was so fed up with the whole debacle and would have been largely biased in my examination.

Geez, you were REALLY bitter about the Headers lol. Even though they work better as an overall gimmick for the mecha than cards would have. You're so salty about them that you throw the one mecha you can stick cards in - you know, that thing you thought was so superior - under the bus. Frankly, with how ungodly biased you are about the Headers someone else should have been put in charge of ALL the Goseiger reviews so that we could get something more balanced and useful.

"There have been some unusual transformable helper mecha in the past- paper lantern, robot ninja-in-training, race car tire- but this one takes the cake as the one that has had the least amount of support from the fan base."
American fans aren't the real fanbase lol. Especially not American fans who have zero tolerance for quirkiness and take SS too seriously. Get over yourself.

Frankly, as Datas Hyper he looks more like a classic toku robot than any of the ones you mentioned (and is most likely an homage to Daitetsujin 17). The only REAL problem with him is that the column on the arcade control panel ends up impolitically positioned (at least on the suit, it's not as bad on the toy).

Kind of neat as an arcade and regular Datas. Not a fan of the Hyper mode though.

I love your passion! That is why i love this site. Not only can we love toys, we can express our extreme hatred for some as well. I am with you all the way EVA. This thing looks bad, like no play value at all, just lame.