The Destroid Monster was one of the iconic mecha featured in the influential anime MACROSS. Although only shown in a few battle scenes, the Monster made an impact on fans both here and in Japan. While there have been countless Valkyrie toys made over the years, there haven't been that many Monster toys.

In 2004 Yamato sort of made a Destroid Monster as it appeared in the VF-X video game. But this wasn't exactly the same Monster. This one TRANSFORMED. Unfortunately, it wasn't a very good toy. 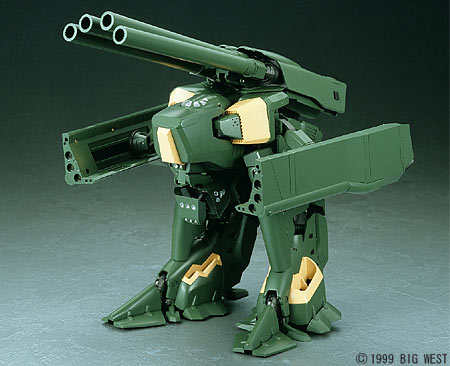 Years later, they included the revised Monster in the Macross Frontier anime. The entry of the DX Chogokin x Robot Spirits VB-6 König Monster is one of the classic scenes in the anime.

That, my friends, is awesome.

The reason this toy is marketed as both a Chogokin and Robot Soul is that while it has significant metal and weight, it's also in scale to the Robot Spirits Valkyries.

In this review, we will be looking at the SP version, available at Anime-Export.com

The first difference in the SP version is the packaging. The toy consists of two packages enclosed in a transparent sleeve. The sleeve has printing of the Songstress of the Galaxy, Sheryl Nome along with glitter paint and other superstar details.

The larger box contains the Monster and some stand parts, and is slightly different from the normal version with SP markings. The second box is thinner and includes the base of the stand as well as various bits of paperwork which we will get to later.

Opening the larger box reveals a classic Styrofoam tray. I like styro. A lot. It feels good, even if it is bad for the environment.

The toy comes in a bag. You lift it out and it feels heavy and solid. You also notice something is missing – an accessory tray. Aside from a few stand parts, this thing is self contained. My heart skips a beat.

The comes in shuttle mode. Its size and weight are impressive. In shuttle mode, the toy does nothing but look good.

The nose features the iconic shark teeth design that was featured on military warplanes. Keeping with the classic wartime feel, the sides feature cheesecake pinup art of Sheryl Nome, as shown in the Macross Frontier movie. The entire body is a drab military olive green, with few paint applications.

At the back of the shuttle mode you have the exposed jet engines, with a few articulated flaps over some of the nozzles. As you move out to the wings you can see two large engines made out of diecast metal. This is our first glimpse as to what lies ahead.

The Monster has three modes – Shuttle, Gerwalk and Destroid. Transformation is not overly complicated, but not obvious either. I definitely needed instructions for this one. Rather than detail the transformation process here, please watch the video review.

In Gerwalk mode, it looks just like it's namesake. The toy stands about 8” tall and the long guns protrude out five inches.

Articulation is limited in the legs, but you can get them to spread out a little by a joint in the hips. There are knee joints that are overly tight and hampered by all of the panels. Behind those panels though are glorious raw diecast metal. The ankles bend and as does the toe joint. Each movement is accompanied by a satisfying click.

The long arm cannons are rather nicely articulated, but it's more due to the necessity of the transformation rather than for play value. The good news is that the joints are stiff and they hold a pose despite their size.

There's a poseable cannon beneath the nose that is revealed when you lift up on the body.

There's also another mode that is just a Gerwalk mode with a plate extended to brace the massive robot when firing. This is called Dozer Blade. There's even a special stand part included just to accommodate this pose. Of course I neglected to photograph this mode, but it is in the video.

From Gerwalk mode it's just a few short clicks and turns to Destroid mode. This thing is massive in this mode, coming in at 14 inches tall to the tips of the guns. It has presence, and this is the first time it hits me – where the hell am I going to put this thing? It's going to be a shelf hog for sure.

Most of the same articulation restrictions apply in Destroid mode. There's no waist joint, but there is articulation in the hips, knees and feet. In this mode the vents on the feet are bent inwards and are reminiscent of high heels.

The large diecast shoulders are now out in full display, and now you have an even wider range of motion in the arms. In this mode the cannons are rotated around to become arms, and there are tiny hands at the ends with articulated fingers.

The head reminds me of the Sumo Gundam from Turn A Gundam. Don't forget to pull up on the central section of the head .

The big cannons on the back are cool and can move into two positions.

The display stand included with the SP version is meant to replicate the deck of the Island-1 ship in which the Monster lands in the above clip. The clear stand parts allow you to display the Monster in any of its modes, although the toy can stand just fine on its own.

Also included in this SP mode are two sticker sheets with alternate decoration schemes, a “contract” between Sheryl Nome and the SMS, and a black Sheryl Nome credit card (with embossed letters and made out of the correct material). They are nice touches for the extreme Macross fan, but in my opinion do not justify the extra cost. I think it all comes down to if you like the Sheryl nose art on this version better.

It's a great toy. It's super fun to mess around with, it's solid, and it's a perfect transformation in the truest sense of the word. The build quality is awesome, with great materials, and no engineering flaws that I can see. That coupled with the great mecha design and significant heft make this a great buy, and i'm regretting that I didn't pick one up earlier so it could get in the 2011 Toy of the Year voting. It might not have won, but It would have been in my top ten.

The DX Chogokin x Robot Spirits VB-6 König Monster is a great toy and is available at Anime-Export.com.

7 comments posted
Spot on, I bought this toy

Spot on, I bought this toy after Christmas and was going to review it but did not get around to it. Glad you could do it with full video and all.

I pretty much agree with this review 100% The extras included with the SP version really aren't worth the 4000 yen difference in price.

My toy had a stress mark on one of the three underside fins on the rear of the shuttle. To expose the gun turret you have to pull the body up and the torso doesn't really lock in the extended position. I also find the head very difficult to get out in destroid mode but after watching your transformation video it looks like it tilts forward more than i had it.

PS serial numbers on the Island Premium card are unique

I could not decide if I wanted the re-colored Predaking or the MP Rod. I have been looking at this for a while now but after your review it sealed the deal for me. I just ordered it from BBST and can't wait for it to get here. The only sad thing about this monster is making room for it on the shelves and that means more stuff in the bins. I swear, I have more of my collection in storage than I do on the shelves!

This is one of the few Frontier designs I actually really liked! I think it is a very worthy successor to the original, and brings it to more prominence than its ancestor as you pointed out.

So... what does it use for weapons in Battroid mode?

Good god that is awesome! I don't know much about Robotech or Macross, but I do love the tech. Got an old metal toy of this from a comic shop not long ago, but it's missing the top cannons (and it's green). Thought it was hilarious when I found out it was called a Monster (and sad that I was missing big ass cannons and not just a cockpit like I thought). If I had the cash, I would totally get this without ever having seen it in action. That's just an awesome toy right there.

Saw this beast a couple months ago in Narita airport. Just doesn't have the dough to bring it home

I wonder what tactical advantage the destroid mode has. The gerwalk mode has the guns and the jet mode presumably has the mobility. Why...oh, because it looks cool.