So I've been on a real Muv-Luv kick as of late. As of this review I finished the first visual novel and am looking forward to going through Muv Luv Unlimited which is where the real meaty sci-fi story kicks off. That isn't to say I don't appreciate a good love triangle and Muv Luv Extra is chock full of charming romantic hijinks. I think it helps bring a good balance to a franchise that has gained a reputation for having a lot of death and despair in it. Vicious man-eating aliens tend to do that for some reason. 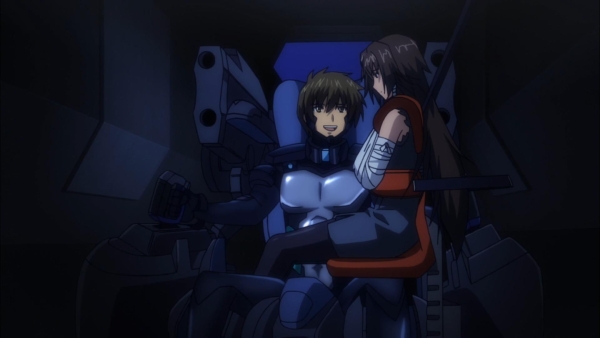 Case in point, I had fun with the Total Eclipse anime with its budding romance between ace test pilot Yuuya "Jeff" Bridges and his commanding officer Yui Takamura. I mean they have so much in common! They like to wear those sexy stupid flight suits, they're both as stubborn as a mule, they enjoy a good home cooked stew, and they pilot super sweet robots! 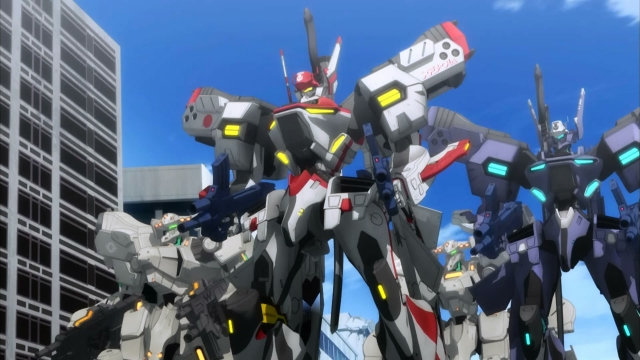 Yuuya's skills as a hotshot pilot lead to him being assigned to Argos Test Flight as a part of Project PROMINENCE. The goal of this multinational coalition is to further the development of Tactical Surface Fighters (TSF) in the hopes of creating better weapons to fend off the ever advancing BETA hoards.

The Shiranui Second XFJ-01a is another enjoyable figure from Kaiyodo's Revoltech line. In the plot of Total Eclipse, Yuuya is the main test pilot in the XFJ Program which is a joint American and Japanese venture to improve the existing Type-94 Shiranui. Yuuya ends up feeling a strong kinship with the Shiranui Second as its internationally based development echoes his heritage as a half-Japanese American. As a 3rd generation TSF, the Shiranui Second is a very sharp looking design and the Revoltech captures this extremely well. The figure stands roughly five and a half inches tall and is made primarily from PVC plastic.

I must say I really love the "demonstration color" variant of the Shiranui Second. In real life, new airplanes are often painted in a demonstration scheme to make it look good n' flashy when presented to bureaucrats and other potential buyers. The combination of vibrant red, gloss white, and dark gray is quite eye-catching. I find the repeated use of red and gray lines running down the torso, arms, and legs to be evocative of an Olympic class sprinter wearing a tracksuit. This combined with the muscular look of the arms and legs reminds me of an old poem I once read that likened an airplane taking off to a runner starting a race. TSF's are basically this idea realized in the form of a sweet robot. Like the Type-00 Takemikazuchi, the Shiranui is not based on any existing real life airplane but it's overall look still invokes the image of a machine that just wants to fly high. It even inspired one fan artist to re-plane-ify it!

And I can't help but see a little of the classic Tekkaman Blade design in this version of the Shiranui Second. It's kind of hard to believe it but Tekkaman Blade is over twenty years old now. For me Tactical Surface Fighters are like a delicious blend of everything I love about 80's and 90's mecha design. Toss in all the allusions and references to real life airplanes and the whole package tickles my brain in a really lewd way.

As an avid Revoltech enthusiast, I always end up being both overjoyed and slightly miffed with each TSF figure I get. The majority of the paint apps are very well done and the tampographed details like the Imperial Army roundel on the shoulder look great. However even my positive attitude can't ignore the sloppy paint on that one yellow light on the right side of the torso. Everything else is pretty well done though.

Little imperfections are irksome but I can't deny that Yuuya's machine is lookin' really sharp! Speaking of tampographed markings, the tiny "XFJ-01a" on the shoulder is crisply applied and easily readable. Also note that the ends of the Shiranui Second's shoulders have extra embedded engines to help it maneuver in close combat. These even have little thruster paddles similar to the engines on a real life F-22 or F-35.

The forehead even has the Shiranui's unique sensor bar setup. This is also tampographed on and looks very clean. The only thing that looks kind of soft detail wise is the four tiny fins on the forehead. They're too thin to depict accurately on the small head of a toy.

You get the typical Revoltech loadout with this figure. Included is a clear display stand with an extension piece, a Revo-container, an effects part style display base, and all the various figure specific accessories.

All TSF's have a pair of jump units that let them leap long distances and fly around at high speeds. On this figure they are attached with chalky white Revoltech joints for maximum flexibility. The jump units on the Shiranui Second have a very thin profile and as a result are very light. Their stark white surface is emblazoned with a large XFJ-01a logo that is broken up by the gap in the engine area.

Right above the logo is a list of all the in-universe companies that are working on the XFJ Program. Again these markings are very cleaning applied and you can actually make out the names of Boening, Fugaku, Mitsuhishi, and Kawazaki. And no, those are not misspelled.

One curious set of accessories is two pairs of exchangeable arm guards. These plug into the forearm with a couple of pegs and can be swapped in and out quite easily. Now if you look closely you'll see that the handles on the combat knives are the same as the detailing on the expanded arm guard.

So when the Shiranui Second doesn't need the gun...

The arm guard unfurls to deliver a knife to the machine's waiting hand! All TSF's sheathed their knives in some hidden compartment on their bodies but most figures do not include a good way to display the whole storage mechanism. Check out the cool design of this little magic hand! I figure when you already have giant robots you might as well give them a gimmicky way of deploying something simple like a knife. On the Revoltech the expanded sheath only points forward but the effect is still pretty amazing in my eyes.

Sadly the unfurled sheaths do not fit in the Revo-container. It's always something, eh?

The Shiranui comes with a single assault cannon and sword with matching mount pylons for the back.

The weapon-holding hands do their job but I was kind of confused as to why they had such a tight grip at first. While many of the included weapons are repeating in other figures, I was surprised to discover each TSF has its own uniquely molded set of hands! On my Shiranui Second, the handle of each weapon should be carefully wedged into the opening between the fingers and palm until the fingers stretch out a bit to let the weapon fit. Once stretched out the weapons go in a lot easier. Again this is all because the hands had to reflect the specific details of the Shiranui design so they aren't exactly like the hands on the other figures. Makes me wonder if any of the other Shiranui variants share this quirk.

Like any good Revoltech, the Shiranui Second excels at dynamic posing. With numerous clicky Revoltech joints and a straightforward design, this figure looks damn good in action. Pop in one of the display bases to give it a better footprint for extreme poses.

Stick it up on the flight stand for some surface to air action.

Yuuya is all about pushing his machine to the edge while also whining about it a bit.

One curious addition to the usual gun use mount pylon is an extra spacer piece with its own double Revoltech joint.

The reason for this spacer piece is that the shape of the Shiranui Second's chest does not allow for the typical underarm firing position unaided. Kaiyodo's solution is kind of charming in its kludged together nature.

The sword's mount pylon delivers it into the Shiranui Second's hand for when Yuuya needs to be more anime.

"You there! I think you need a taste of American foreign policy!"

Whether he knows it or not, Yuuya is a real hit with the ladies.

Sometimes this can cause some international tension...

"Give him back you Japanese hussy!"

"Not until he's finished helping us ensure the longevity of the Japanese Empire!"

When we last left our heroes... Yui in her Type-00F Takemikazuchi was at the mercy of a brainwashed Cryska and her powerful Su-37UB Terminator.

And now the thrilling conclusion.

"Cryska! I don't know what they've done to you but I'm gonna save you and Yui!"

"Gonna have to do better than that, Cryska!"

"Now that she's stunned, I have to take a chance! No weapons this time... just trust! CRYSKAAAA!"

"Yui! I did it! I broke Cryska free from the weird and vague mind-control from the show!"

And thus ends my recreation of what may or may not have happened in the series. In the end I found Muv Luv Total Eclipse to be pretty fun overall and the Revoltech Shiranui Second is a nice little tribute my enjoyment of the series. Out of all the Muv Luv Revoltechs, this one and its all white repaint seem to be quite plentiful so I definitely recommend it. The design and the color scheme go hand in hand to make this one of the slickest Tactical Surface Fighter designs. Someday I may even be tempted to track down the A3 version for a little double dipping. These guys are like my G.I. Joes or Kamen Riders. They're all similar but with their own little quirks and details that make them all unique in my eyes.

So until next time!

...which at this rate may be a less than a week or two with the rate I keep finding good deals on Muv Luv toys.

Great review, I'm not all that interested in anime anymore, but the robots make me happy

Hmmm. Looks like a VF-25F Alto knocked up an Eva Unit and was midwifed by Solar Aquarion.
(I like it--not enough to open my wallet for it but I could totally see that sitting my shelf)

"Looks like a VF-25F Alto knocked up an Eva Unit "

Look you can take your mecha-preg fics back to HotSteelStories.org.

AAAAAHAHAHHAHA I wish HotSteelStories.org was real. It would be the biggest trainwreck

The fun you can have playing with all these mechs together makes up for the curse white paint and primary color apps always seems to have on PVC. Yuuya's hot-rodded TSF looks horrible compared to all the other ones thus-far in the Revo TSF series.

But I loved your review! Very entertaining!

Nothing gets in the way of me playing house with robots. Robot house.