Muv-Luv Alernative Total Eclipse (check it out on Crunchyroll) is the franchise's first full length anime. Overall I found it to be an enjoyable mecha series that, for better or worse, brought back a little bit of the 80's in a modern show. I mean there's totally a girl with green hair who goes around calling her beloved man "daaaaaaarling!"

But we're not going to talk about some Chinese Hatsune Miku knockoff when we've got the show's real heroine as the subject of today's review. Lieutenant Yui Takamura of the Imperial Army is a battle hardened soldier who oversees the XFJ Project. As the aim of project is to upgrade Japan's aging Shiranui Tactical Surface Fighter (TSF) as a means of increasing Japan's military strength in the wake of being occupied by the BETA. Yui had her baptism by fire as a young recruit when her entire unit was wiped out while attempting to escape from a BETA onslaught. Because of this she comes across as very cold and authoritative when dealing with others, especially the top test pilot under her command: Yuuya "Jeff" Bridges. After spending some time with Yuuya (and downing a few glasses of orange juice), Yui started to soften up a bit. 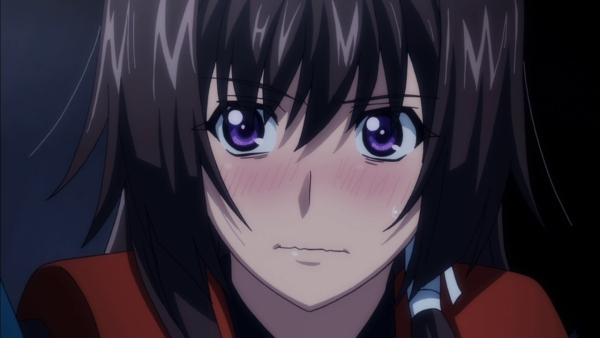 Now that we've got the character introduction out of the way, let's look at her sweet robot.

The Type-00F Takemikazuchi ( 武御雷) is a high-performance TSF that is only assigned to members of Japan's Royal Guard. As a descendant of minor nobility, Yui proudly takes on the task of defending her homeland against vicious man-eating aliens. This particular Revoltech is a Hobby Stock exclusive repaint of the purple colored Type-00R figure. It does not get its own box, just a sticker denoting it is the yellow variant. For whatever reason its name is sometimes romanzied as Takemikaduchi on various merchandise. The name itself comes from the patron deity of war and martial arts and in noway sounds pretentious. For the sake of brevity, I am going to refer to the Type-00F by its nickname "Takemi."

The Takemi is a typical Revoltech figure and stands a little under six inches tall. It comes with a wide range of accessories with the most notable ones being a pair of big swords. You get the usual compliment of three pairs of interchangeable hands, a Revocontainer, an effect part base, and a stand. The weapons are a bit different with the figure only having one rifle and a pair of plug-in wrist blades to compliment the swords. The swords and rifle have their own mount pylons for securing them on the figure's back.

I find the banana colored Takemi to be a really sharp design. It's a bit more smooth and organic looking than other TSF's and has an air of majesty about it that befits the Royal Guard. The combination of fresh fruit yellow with grape purple highlights are oddly striking and kind of delicious.

"Damn these American books for not including me!"

The Takemi is one few TSF's that is not derived from a real life fighter jet. I haven't seen any fanartists attempt to re-planify the design as of yet which is a shame since it still has a lot of little nods and details that link it to real life jets.

It may be my fifth TSF Revoltech but the Takemi still manages to stand out in a crowd. Must be the yellow.

"Viper-san, I am so frustrated with people not being able to tell us TSF's apart!"

"Hmmph! You Americans all look alike to me!"

The Takemi itself is practically the spokesmecha for the Muv-Luv franchise and appears in a lot of promotional material and merchandise. While the design is often compared to the Evangelion units, it is actually based on the titular mechanical lifeform from Detonator Orgun. Organ predates Eva by a few years and is like the prototypical 90's mecha with its svelte frame and muscular build. The Takemi emulates its forebear with huge shoulder pads, a narrow face, and deployable wrist blades.

The wrist blades plug in at the tips of the Takemi's gauntlets. The tab goes in at an angle so as to not interfere with the hands too much. With the blades deployed the Takemi looks like it stepped out a 90's OVA directed by the master of mayhem, Masami Obari. I'd be careful putting in the blades the first time so you can work the tabs past any excess paint. Doing it a few times should make it easier to attach the blades.

Try not to think about whether or not those blades could fit inside the arms since I'm sure there's a wiki entry explaining it.

A fully loaded Takemi does not look nearly as bulky as its commoner counterparts. This Revoltech figure stands and poses incredibly well. It might be the best of my own little squadron. As the first Muv-Luv Revoltech, you can tell they really hit the ground running with this release.

Both swords can clip into specialized mount pylons. These are much narrower than the single gun use mount pylon that is also included. The swords clip in via a set of dimples near the base of the blade. The Takemi's jump units are especially thin and as such really don't require any fiddling to move them out of the way when posing. They have very sharp sawtooth angles that suggest the Takemi would be a cutting edge fighter jet in real life.

The Takemi's Type 87 Assault Cannon is a very compact gun that resembles the real world P90. Anyone whose ever watched Ghost in the Shell knows Japan loves themselves a P90. One nice thing is for once the gun is small enough to fit inside the Revocontainer.

A TSF's conveniently placed mount pylons can deliver a weapon to its waiting hand. Nothin says "like my Japanese animes" than pulling a huge sword off your back from an elaborate sheath.

I am not joking when I say the camera really loves this figure. One of the reason I keep picking up and reviewing the TSF Revoltechs is they are a great way to just have fun while shooting pictures. Their simple construction means they can breeze through a photo session the way my more elaborate toys cannot. I know Revoltechs are sometimes maligned by older collectors for their "fiddliness" but I think that's their greatest strength. I want to fiddle with them to find another cool pose even if they don't move exactly like a traditional action figure.

*The following may or may not have happened in the anime*

"I've got to stop her before she hurts someone!"

"She's too strong. Can I hold her here?"

"I can't lose here! For the sake of the Empire and...for Yuuya!"

TOO SEE THE EXCITING CONCLUSION TUNE IN...

Uh... as soon as I get a Shiranui Second figure.

I was genuinely surprised by the Type-00F Takemikazuchi. For me it combines the flair of the base design with a connection to the on screen character. Before watching the show the Takemi figures were low on my priorities. However in light of preordering the upcoming Nendoroid Yui Takamura (cuz it comes with a BETA) I had to get Yui's personal machine for my collection. I'm glad I did because this is a damn fine figure. As it comes in a few different colors I would recommend just getting the least expensive one as they are all mostly the same otherwise. To my knowledge the standard release only comes with one sword instead of two. I payed a little over MSRP to get Yui's Takemi but I don't regret it one bit. I don't think I will run out of Luv at the rate I'm going!

"Viper-san, I am so frustrated with people not being able to tell us TSF's apart!"
"But Ms. Takemi... I'm Hornet."
"Hmmph! You Americans all look alike to me!"

No one likes banana candy.
See? It's so lonely. The swords are mounted with the blades facing outward on the pylon normally.

I was hoping no one would notice...

I failed the Empire :x