The Muv-Luv franchise continues to delight its fans while utterly confusing everyone else. It began humbly enough with what looked like a normal visual novel game and through what some may call a masterstroke (or just good Japanese humor), it became a mecha franchise that dares stand side-by-side with the greatest shows form the 1980's. While the "Muv-Luv Extra" portion of the first game plays out with a typical high school romance among energetic teenagers, the subsequent "Muv-Luv Unlimited" story (unlocked by completing "Extra") turns the whole world on its head. The game's young protagonist, Takeru, wakes up much like at the start of "Extra" and does not find a nubile young woman in his bed but rather the wreckage of a giant robot. From there he learns that he has somehow been transported to an alternate timeline where the Earth has been invaded by vicious man-eating aliens known as the BETA. One thing that throws outsiders for a loop is that all of the characters from the happy-go-lucky romance story are still present in this Starship Troopers-esque world filled with political intrigue, giant robots, and despair. At the start of the third game, "Muv-Luv Alternative," Takeru is given a chance to relive the events of "Unlimited" and put right what once went wrong so that he may someday make the leap into a less depressing situation. The unconventional genesis of the Muv-Luv franchise is one of the things that endears itself to fans who react to all aspects of Muv-Luv (both good and bad) with a positive outlook. 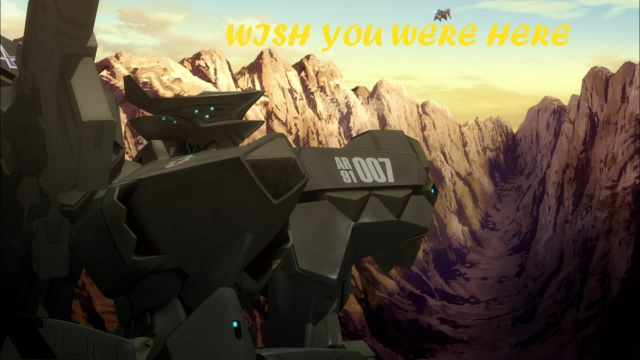 A perfect moment from the "Muv-Luv Alternative: Total Eclipse" anime.

The "Muv-Luv Alternative" story has gone on to serve as the basis for many spinoffs. One such spinoff is "Muv-Luv Alternative: Total Eclipse," which revolves around a young half-Japanese American pilot named Yuuya "Jeff" Bridges. Before being transferred to the XFJ Project, he was a test pilot for America's premier Tactical Surface Fighter or TSF: the F-22A Raptor. "Total Eclipse" started off as a series of light novels and has since been adapted into a manga and most recently an anime. "Total Eclipse" is set to come full circle with an upcoming visual novel adaptation.

Kaiyodo's Revoltech F-22A Raptor EMD Phase is another entry in their Muv-Luv subline. Much like the Su-37UB Terminator" and the MiG-21 Balalaika "Schwarzesmarken", these toys are roughly five inches tall and are constructed primarily out of hard PVC plastic. Overall I've found these figures to be a satisfying offering of hand candy. They are quite robust and fun to mess around with. I have four figures so far and am looking to acquire several more. For an amateur airplane enthusiast such as myself, the military aviation factor in Tactical Surface Fighters is quite appealing.

As with most TSFs, the Raptor is based on the real life fighter jet of the same name. The real Raptor has found its way into both American and Japanese pop culture in part due to the infamous Advanced Tactical Fighter competition between it and the YF-23 Black Widow. All the publicity surrounding two bleeding edge fighter jets locked in intense competition spurred the imaginations of many aviation enthusiasts around the world. Muv-Luv has taken many real life events in military aviation and transplanted them into their world where most of their airplanes are now sweet looking robots. Even the name EMD (Engineering Manufacturing and Development) Phase is taken from the development of the real life Raptor. There is also a light gray Hobby Stock exclusive variant of the Raptor.

The design of a Tactical Surface Fighter seeks to blend various design cues taken from its real life namesake around their pleasingly straightforward designs. Note that the Raptor is very angular with dozens of sawtooth style panels studding its dark blue frame. In the Muv-Luv universe the Raptor is a top-of-the-line machine that incorporates the latest technology to make it extremely powerful against the BETA and other TSFs.

In my misspent youth playing flight simulators I somehow managed to acquire no less than three dedicated F-22 Raptor games. While I doubt any of these games would run on a modern computer, the contents of their manuals can continue to educated the Muv-Luv Raptor about its heritage. In the Muv-Luv universe, the Raptor is produced by the famous Lockweed Mardin who have nothing to do with Lockheed Martin at all.

"I wonder if I can do a barrel roll."

"Long range missile combat? This world must be safe from Laser Class BETA."

Getting to the figure itself, the Raptor comes with the usual assortment of accessories such as a clear display base that can be plugged into either foot. It also comes with two identical AMWS-21 assault cannons, a pair of knives, and three pairs of optional hands. You get fists, weapon holding hands, and splayed hands.

"On the one hand I question the need for TSFs designed with fighting other TSFs in mind."

"And on the mount pylons I've got two huge guns!"

The two mount pylons on the back of the Raptor can hold its guns for hands-free firepower. You simply plug the assault cannon's gunsight into the mount pylon's bracket to attach them. An extra "effects part" display base plugs into either foot to let you stabilize the figure with a little more flair.

And if you have another Raptor or either version of the Revoltech F-18E/F Super Hornet you can equip a single Raptor with four Assault Cannons for when you gotta have more guns!

Tactical Surface Fighters are a revolution in close-range 360 degree combat.

The Raptor comes with a handy Revocontainer for storing all of its small accessories.

As I noted before, the Revoltech Muv-Luv figures are hardy enough to take outside for some incredibly nerdy fun! I find that the TSF designs seem to come alive when photographed in the great outdoors. These shots of the Raptor perched atop the rocky sides of a ravine are dedicated to Yuuya's former commander. Rick "Great Balls of Fire" Sven tragically perished in an TSF testing accident involving a canyon and huge rocks.

The Raptor is loaded with Revoltech joints with only its knees lacking Kaiyodo's trademark joint system. This allows the Raptor to assuming both extreme poses and to stand in a neutral stance. Note the symbol on the right shoulder that shows this Raptor belongs to the 65th Combat Training Battalion who are known as the Infinities. Yuuya used to belong to this outfit and would push his Raptor to the edge during test flights. Here you can more clearly see the twin chest intakes on the Raptor's torso that resemble the ones on the real life Raptor. The only thing this figure is missing is markings on its left shoulder like in the above screencap. Some of the other TSF figures come with decal sheets so I'm not sure why the Raptor does not.

A Tactical Surface Fighter's characteristic "jump units" are what allow it to fly around with great deal of speed and maneuverability. Each jump unit is mounted to the TSF's hips with a double Revoltech joint. The Raptor's massive jump units are both very impressive and a bit of a strain on the figure's sense of balance. While it can stand up without support, the jump units do make it back heavy.

That being said, the design of the Raptor's jump units is nicely realized. Each jet engine on the jump unit ends in a two dimensional thrust array like with the actual Raptor. What purpose this serves on jet engines that can already move is yet to be understood by me but I am sure the engineers at Lockweed Mardin know what they are doing.

The back of the Raptor reveals even more juicy detailing. Some think the figure's obvious Revoltech joints can be distracting but I think they look close enough to a TSF's nondescript black joints for my tastes.

The Raptor's AMWS-21 assault cannons are well detailed for their size. I really like the row of Macross style verniers on weapon's body. For added flexibility the underslung 120 mm cannon can be detached if so desired.

Again the mount pylons function as an excellent and straightforward gimmick. The Raptor can be right-handed two times over!

An American TSF's melee weapon of choice is a pair of lightweight combat knives which allow for maximum flexibility and coolness.

A Raptor can even make an attempt at CQC.

The twin stealth sheathes on either thigh have a small degree of motion so as to not impede the Raptor's articulation. Half the fun of these figures is messing around with them until you arrive at the perfect pose.

A Raptor scans the valley for enemy incursions.

The aforementioned display base comes with a pair of extension pieces that allow you to take your Raptor into the air. Each part has its own Revoltech joint so it can keep the Raptor is a flying pose almost indefinitely.

The modular nature of Revoltech figures allows you to swap in parts from other Revoltechs or to utilize the unassuming peg holes in a pair of Revopliers (sold separately). Behold! RAPTOGAIGAR!

Despite being standard five inch sized toys, the Revoltech Tactical Surface Fighters have a lot of presence.

America's Tactical Surface Fighter forces are always at the ready.

Even as the sun sets, the Raptor stands waiting for the coming night.

The angular frame and dark surface of the Raptor let it pierce the darkness.

"The best weapon is the one the enemy will never see coming."

Even with the serious side to Muv-Luv, I feel as though the more tongue-in-cheek aspects make it oddly charming. As a gift to the Muv-Luv fans out there, I offer everyone a chance to create the ultimate Muv-Luv experience!

"Aahh~ I wish Yuuya-kun would understand how I feel! I haven't seen him since he joined up with the XFJ team! I hope he's still eating well."

"Listen kid! You need to let Yuuya know that you like him. Otherwise he'll just leave you for some Japanese hussy!"

"Oh Weissy-oneechan! I suppose you're probably right. But just thinking about him makes my engines go doki doki!"

I present to you the "Sumika window" diorama. All you need to do to make your own is to download the templates right here and print them out on some card stock. For my display I used a pair of Max Factory Di:Stages.

In the age of rising toy costs, Kaiyodo's Revoltech subline for Muv-Luv figures manages to keep each one around 2700 yen MSRP. The Raptor and its brethren only falter in that the unfavorable exchange rate and shipping costs can push their price outside of a comfortable range. I've been happy with each of the four figures I've managed to acquire and I think these are worth a look for a price close to their MSRP. For fans of the franchise these are a great Muv-Luv alternative to the expensive limited run A3 figures by Volks. To me Revoltechs are very tactile figures that beg to be played around with to get the most out of them.

TSFs would totally say "...and on the mount pylon." they would say it all the time. if only to emphasize their superiority over the merely two-handed