Out of all the entries in Shoji Kawamori's long running series, Macross 7 still has the lion's share of different Variable Fighters. With the VF-19 being the headlining Valkyrie, it was only natural to see a half dozen variants make their debut over the course of the anime. In celebration of the show's 20th anniversary, let's take a look at one of the more humble roles for this iconic design.

At the start of the series, Docker was one of the Diamond Force pilots flying a VF-17 Nightmare but was taken out action early on by a new enemy weapon that left him comatose for while. Eventually he recovered and was promoted to the leader of the new Emerald Force team consisting of three top of the line VF-19 Excaliburs. Docker himself pilots a VF-19S, which I previously reviewed here. Under his command were two soldiers by the named Voldick and Matthews who flew VF-19F's. 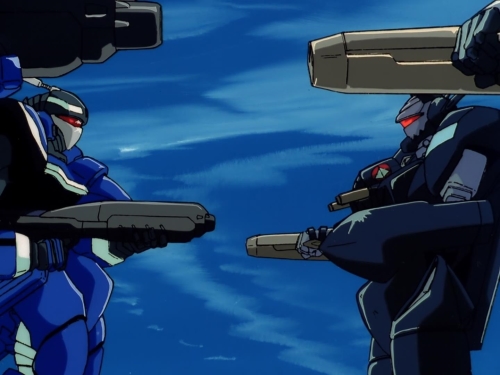 Valkyries of Emerald Force and Diamond Force stand by as their commanding officers argue about petty things.

In Macross 7, the VF-19F's didn't do much other than provide backup for Docker. Still there is a precedence for them in the merchandise sas the old Bandai Blazer Valkyrie model kits let you build either of the two Emerald Force types. Naturally this figure is not that different from either its leader, Basara's Fire Valkyrie or even Arcadia's (nee. Yamato) most recent YF-19 with FAST packs. However it does have a claim to fame as the first completed toy of the VF-19F.

Like the other Valkyries of this type, the VF-19F is a gorgeous looking fighter with an attractive gloss finish on its blue frame. In this mode the toy is over a foot long and has a good amount of weight due to all the diecast used in its joints. Since all the metal is concentrated towards the rear it is best to grab it by the back end if you're into swooshing your expensive airplane toys around the house.

In this mode the only ways to tell an S-type from an F-type are the white stripes and single laser cannon sticking out of the spine. They both share the thicker forward swept wings and extra black indents on the front fairings which differentiate these VF-19's from the Fire Valkyrie and the YF-19.

As expected, the VF-19F has an incredibly sleek profile. The toy can roll around smoothly on its rubber tires and diecast landing gear.

Flip up the canopy to reveal Voldick (or maybe that's Matthews) in his pilot suit. I always liked how colorful the gear was in Macross 7 as it provided a striking contrast to the mostly monochromatic Valkyries.

Like any proper Valkyrie toy, the VF-19F's gun pod stores underneath where it gets sandwiched between a pair of tabs on the forearms. The fit between the tabs and the slot in the gun handle is usually tight straight out of the package.

The leg mounted weapon bays can be opened in all three modes to reveal a bank of half-missiles. The paired off tips can be rotated forward to represent the missiles being ready to fire.

For sticklers for screen accuracy, a fill in piece is provided that smooths over the gap between the back of the head and the body. It needs to be installed while the two shoulder flaps that meet the top of the head are out of the way like in Gerwalk mode.

You do get a full set of stand adapters for Yamato's old Macross Display Stand and Mighty Block stands, I do not own the former and I've never had much like with the latter. The connector for fighter and Gerwalk mode does not lock in tight enough to offset the heavy back end of the Valkyrie anyways.

So instead I used my trusty Flight Pose stand to put the VF-19F in the air. Again most of the weight is at the rear so it needs to be balanced with that in mind.

The VF-19 is a powerful looking fighter.

Transformation to Gerwalk mode is the same as before and involves disengaging some really strong tabs that connect the shoulder pads to the back of the legs. Some have taken to sanding these down to make the conversion process easier. There's also a fair number of extra connections that align the wing roots to the legs and the inner calves to the main body. If you want a better look at the process, check out the video I did did with the VF-19S

In Gerwalk mode, the VF-19F has all the strengths and weakness of the original animated design. There's a fair bit of weight towards the front in this form but the legs are all the way at the rear. Note that the ankles use a metal ball-joint that tends to get loose when not wedged all the way forward or back so posing in Gerwalk mode can be difficult.

Still the figure can do a fairly good lean in Gerwalk mode.

And a pair of upper thigh swivels give it the right stance.

Battroid mode is where VF-19's always shine with the huge fighter undergoing a miraculous transformation into a burly robot. It's very poised with the signature mono-boob pointing towards the enemy. Yamato's take on the Macross 7 era VF-19's recently became official thanks to one of the extra videos included with the movie Macross FB7. It's just a testament to how well these toys capture the look and feel of this family of Valkyries.

The more utilitarian head design is topped off with piercing dark red visor. There's a small reflector behind the clear plastic "eye" that always catches light in the right way.

Save for the large hip thingies, the VF-19F is a pretty clean robot front to back. Be aware that in this mode the sharp edges of the wing roots are exposed and can be damaged (and damaging to flesh) with mishandling.

To further smooth things over you get a pair of filler pieces for the thighs to achieve greater screen accuracy.

You also get an additional arm shield that is curvier like the animation model. While it is a nice touch, it's hard to tell the difference between the two at a glance and the anime accurate one on the right cannot be used in fighter mode so I usually just leave these in the box.

Like the Fire Valkyrie, the VF-19F's cockpit can be accessed in Battroid mode through a hatch in the spine.

If you wanted to spruce up your toy with a few more markings, Yamato included a full sticker sheet. The unique Emerald Force logos and NUNS emblems were designed in collaboration with GA Graphic's Variable Fighter Master File book series.

Also included was an ad for something called the "VF-4G Litning" whatever that is...

The cleanliness of the VF-19F makes it one of the more flexible Valkyries in Battroid mode.

While there is a stand adapter included, I feel like the heaviness of the toy demands something more robust to let it fly in Battroid mode. You definitely feel the weight when all the parts are oriented vertically.

It also kneels extremely well thanks to the extra joint hip joint that is really just there for aesthetics.

While a lot was inherited from Yamato's original YF-19 toy (represented by the Double Nuts variant), the VF-19's much refined from their earlier efforts and added a lot to the build quality. Note that normally the old YF-19 is actually taller than the VF-19F but you can make them roughly the same height by leaving the latter's hips untransformed. Again you can see how that additional swivel is really just there to make VF-19 a little less high-crotched than its predecessor.

While both the VF-19F and YF-19 have the same single laser gun head style, it's interesting to see how the details differ between the two. With a few subtle changes, one has the look of a rank and file soldier while the other has a more intense expression like a shonen hero.

Likewise the more ornate head on the VF-19S separates it from the men under Docker's command. As a Macross 7 fan, seeing two thirds of the jerk squad in my collection makes me quite happy.

Next to the hulking VF-17S, the VF-19F appears a bit more normal. Together these are the men and machines tasked with defending the Macross 7 fleet from the dangers of deep space.

And here's a little blue and red action for the color coordination enthusiasts out there.

Putting together this review reminded me just how much Valkyrie variety there was in the 90's!

The 2000's have been good to the series as well with the VF-25 Messiah Valkyrie taking up the mantle of bleeding edge Variable Fighters.

And as a reminder, no VF-25A's were shot down unlike the other special forces Valkyries like the VF-19F. There's no hard feelings about it between the two though.

The VF-19F Emerald Force Normal Color was a normal retail release from Yamato that was given a lukewarm reception. As this particular Valkyrie isn't flown by a main character, it was aimed squarely at completists. The figure itself is very much a collector's toy and feels like a heavily machined piece of mass-produced craftsmanship. I think it's a testament to Yamato's devotion to the brand to even try to make as many of the VF-19's from Macross 7 as they did. Sadly their efforts weren't rewarded with a lot of these figures ended up hanging around a little too long and had to be cleared out. I was able to find one at Mandarake for a little under its MSRP and I feel satisfied even if it is my third version of this figure. My greatest praise for the VF-19F can also be my biggest complaint as it really is just more of the same. At the very least it helps me remember a little more trivia about Macross 7 because you can't have an Emerald Force without Voldick and Matthews.

Those are some great names.

The 19s design is pretty sharp to be sure, but i was always a bigger fan of the 21, even more after Max and Mirya had their own.