Chou Soku Henkei Gyrozetter is a fun robot action series set in a future where young kids can drive cars thanks to super advance AI systems. With the addition of some ancient techno magic, select cars can also transform into powerful robots (Gyrozetters) which the children enrolled in the Arcadia Academy use to fight the forces of evil. The malicious Xenon corporation has their own Gyrozetters and send their top pilot, the mysterious Eraser, to destroy the Arcadia team and pave the way for world domination. His machine is the vicious looking Xenon Guiltice. 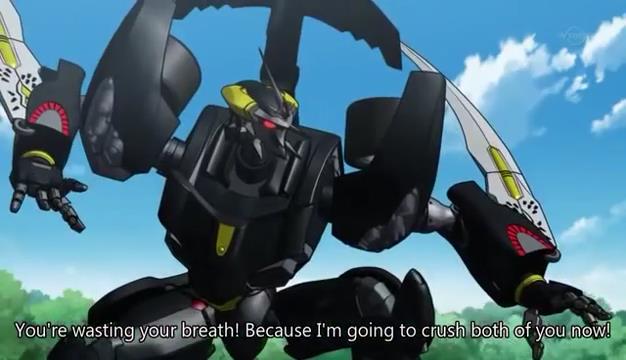 Eraser and his Guiltice square off against Kakeru and his Raibird.

Like many modern properties, Gyrozetter used a multimedia approach that consisted of an arcade game, a manga, an anime, and of course toys. The Rapid Morphing Series (RMS) were the deluxe figures of the line and covered a large number of the titular Gyrozetter machines. In a way they are like similarly sized Transformers figures. However, there is a key difference between the two series that I'd like to point out before we continue. When a pilot makes his car "Chou Soku Henkei" into a Gyrozetter, the vehicle doesn't really transform in a mechanical sense...

It's kind of like Kamen Rider but with cars! Quite a neat magic trick wouldn't you say?

So with that in mind, let's take a look at the subject of this review.

Each RMS figure comes in a plastic bubble with a cardboard backing. Since the backing is only held in with a bit of clear tape, it is easy to remove the figure without damaging the packaging.

The card back shows the Guiltice in both modes as well as the other Gyrozetter toys in the line.

This figure comes with a small but essential set of accessories, all of which are just parts of the car mode.

The Guiltice stands about six and a half inches tall in robot mode. It is very much a kid's toy as it is built from sturdy black plastic and is relatively simple engineering wise. The RMS figures attempt to straddle the line between the incredibly clean robot modes from the anime and the necessity to create a transformable figure so this version of the Guiltice is a bit less streamlined than what you'd see on screen.

Guiltice is slightly larger than a typical Deluxe Class Transformer like Drift but around the same size as a more upscale Masterpiece figure like G2 Sideswipe.

The whole front bumper assembly can be attached to the back of the robot mode via a hinge. I found the connection between the bumper and the hinge to be rather soft. While it does the job for the transformation, the whole piece can pop off while handling the toy so I prefer to leave it aside.

Without the front bumper piece the figure looks a lot cleaner from the rear. Right between Guiltice's shoulder pads is his main crossbow type weapon which is made from the car mode's hood. This plugs into the back with a pair of small pegs that take a little wiggling to get the weapon in place. Note that this figure has a pair of wheels for heels which lets it skate around like a Scopedog.

The Guiltice has an appropriately evil looking visage with dark red eyes and a silver face mask. The tiny spires around its "mouth" and the crest on its head are more from soft PVC plastic. As a result they do not look quite as sharp as they do on the CGI model.

Astute readers may have noticed that Guiltice's head seems quite similar to a lot of robot designs from shows like Eureka 7 and Aquarion. It turns out that famous mechanical designer, Shoji Kawamori, was responsible for the Guiltice. I assure you this had no influence on my desire to purchase this toy whatsoever.

I'll just put the Guiltice next to my Robot Damashii Nirvash Type Zero and my Super Robot Chogokin Solar Aquarion for the sake of comparison with other Bandai toys.

As a toy designed for young children, the Guiltice's articulation is basic but functional. It uses a lot of swivels, hinges, and universal joints to move about. The exceptions are the wrists, shoulders, and neck which employ ball-joints that provide a fair range of motion. Guiltice's head can pop off its body rather easily but reattaches with no harm done to the toy. Each arm has a flip out blade that is made from slightly pliable plastic. The blades cannot swing all the way back against the forearm like in the show.

Its knees are limited to a slight bend but do feature some outward motion due to the transformation. There's also some thigh swivels and a limited universal joint in each hip. The Guiltice also has a completely unhindered waist-joint which is used in the conversion to car mode. Note the pair of red Kawamori hip thingies which on this figure that are made out of soft plastic. They don't actually move but are pliable enough so that they allow the thigh swivel to function.

One issue I have with this figure's articulation is how the big shoulder pads are not a part of the arm and just float above in such a way so as they almost always knock against the Guiltice's car door forearms. The whole shoulder pad assembly can move up and down but only in one big chunk and is locked in place when the crossbow is attached.

Lacking any kind of skirt armor, the Guiltice can easily kick its opponent right in the face.

You can pop the crossbow off of Guiltice's back and stick it in either hand.

The remaining chunk of the car can be configured into a makeshift shield. It's a little too heavy for the Guiltice to hold without making the elbows sag and doesn't really lock together as a shield. Still if you want the toy to have all of its accessories on hand this is an option.

Given the fanciful transformation shown in the anime, the RMS figures take a pretty basic approach to replicating this feature. Simply twist the lower body around and arrange the legs, arms, and shoulder pads so that they form the sides of the car to begin the conversion. There is a small bit of advance engineering involved as the heel wheels slide up into the legs and the shoulder wheels rotate ninety degrees into the front fairings. Also the forearm blades flip in a bit so they rest parallel to the ground.

Then you hinge down the front bumper assembly (or just attach it if you left it separate) and plug the crossbow on as the hood. The last step involves unfurling the shield so it can become the whole upper half of the vehicle. It is here I learned that the "rapid" part of Rapid Morphing Series really only applies when going from car to robot as doing the opposite involves some massaging to great all the pegs and tabs lined up correctly. Since the figure is packaged in robot mode you will have to do this process at least once just to experience the car mode.

In car mode the Guiltice is a sleek and dangerous looking car that I've been told is an entirely fictional design. It certainly bears some resemblance to Kawamori's work on the Cyber Formula series. The vehicle rolls around quite smoothly on its plastic tires.

Due to how little the robot mode folds up, the Guiltice remains around the same size in car mode. It's larger than either Drift or G2 Sideswipe.

The minimalist paint work makes for an effective color scheme.

At there rear is an exposed engine component that is meant to resemble the Guiltice's head.

And the rear has some little details like four tiny exhaust ports and dark red tail lights.

When other robots make fun of Guiltice for not being a real Transformer it is up to Nirvash-oneesan and Aquarion-oniichan to cheer him up.

Overall the Rapid Morphing Series toy of the Xenon Guiltice was an interesting curiosity for me. It may not seem as intricate as your average Transformer but that's because it isn't trying to be. The RMS figures strive to be fun children's toys and not much more. I feel like I can still appreciate a toy that asks you not to think too hard about show accuracy, points of articulation, or diecast content. Fans of Gyrozetter or collectors in general should find a lot to like about this figure if they go into it expecting an enjoyable (if not particularly elegant) robot toy. Recently it seems like shops have started to clear out their Gyrozetter merchandise at competitive prices so it shouldn't be too hard to pick one up. If you like the designs I'd say pick one up.

Did someone say Eraser???

"I'll just put the Guiltice next to my Robot Damashii Nirvash Type Zero and my Super Robot Chogokin Solar Aquarion for the sake of comparison with other Bandai toys. "

In my mind, they're all pointing at each other and shouting. The massive uni-boob screams Kawamori, but the lack of extraneous bits hanging off the hips leaves me wanting.

Seriously, though, it may be interesting to compare these toys with the one-step and flip-change toys that Hasbro has on the way for the Transformers Age of Extinction line. They seem like a very different take on the simple, kid-friendly rapid transformation idea.