Domo-kun is an official mascot of the Japanese public broadcast network NHK. He first appeared in 1998 in a series of 30 second shorts that aired during their children's programming. However, in the US he's just a cool looking character that appears on everything from shirts to notebooks to plush toys. Almost nobody in the US knows where Domo came from, all they know is that Domo is cool. And I agree. I even have a Domo sticker on my car.

I first encountered Domo during a NHK studio tour in 2003. At the time he was unknown in the states, but in Japan his likeness was everywhere.

There was even a giant mural of him on the side of NHK studios. I brought a plush back with me, thinking I was onto something cool and unique. I could not have been more surprised when Domo took off years later in the states, and is still going strong.

Now, some 16 years later, Domo gets a release in the Revoltech line, sculpted by Katsuhisa Yamaguchi.

Domo comes in the standard Revoltech box. Inside is the Domo figure, a bunch of accessories, Revoltech container, and a stand.

Domo's first wide exposure was an image meme with him frolicking in a field chasing kittens. Because of this I thought it appropriate to take Domo outside. 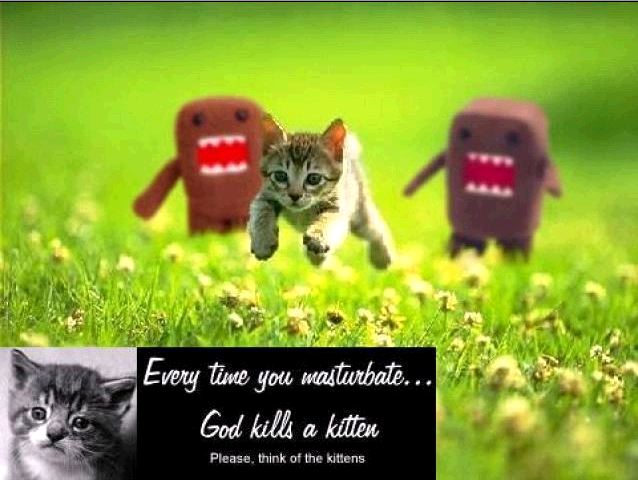 As you can see, Domo blends into his natural surroundings.

To give him a little height I used the multi-part Revoltech stand to elevate him a bit. The stand consists of the base, arm, 2 white Revoltech joints, and an extender arm. The last joint plugs into one of two holes in the back.

As you can see, Domo is fairly articulated. The bulk of the body is one solid piece, but the arms, lets and waist all have multiple points of articulation.

Normally Domo has no visible jointwork, as he is a stop-motion character. However here it's not too bad. The Revoltech joints add enough flexibility that the movement looks pretty natural, or as natural as a made up character can be.

The only real flaw is the hinge joints on the back of the legs. The double joints in the ankles are a bit weird also.

Domo is a pretty cool guy.

When he's chillng at home, he likes to kick back and watch the weather on his spiffy flat-panel TV.

He comes with a remote that pegs into the variant hands.

You would not think so to look at him, but Domo is actually a hard-working guy. When not hanging out at home he has a career as a weatherman for NHK. The included microphone plugs into a variant hand.

After a long day of broadcasting to children across Japan, Domo likes to have dinner. His favorite bowl of rice and chopsticks are included.

Look how effortlessly Domo sits down.

Domo has a soul, a rarity for mascot characters. To experience the wide range of emotions Domo posesses, you need to change his eyes. Four sets of eyes are included.

If you were to tell Domo that his show got cancelled, he would be angry.

If you were to make Domo run after kitties all day, he would be tired.

If you were to tell Domo that his innocent child-friendly persona as a public broadcast mascot had been cheapened to a corporate shill for Target, he would cry.

If you were to approach Domo after the well of tears had run dry, he would likely be asleep, dreaming of a world where America never discovered him.

Domo is a free spirit, like a wood nymph or a hippie, and should be left alone in the wild.

If you see Domo in the woods, leave him be. This Revoltech toy is a good enough facsimile for you to own so you can let the real Domo be one with the forest.

I had a lot of fun with Domo outside, and of course, I forgot to take pictures of a few things. For one, the default hands Domo comes with have little panels that pop out. The package shows Domo holding a business card with them. The other thing I forgot was that there is a clear rod that helps Domo stand when not using the Revoltech stand.

3 comments posted
Ok, someone has to say it...

That combination of texture and color suuuuuure does look a lot like poo. Domo Loaf!

The shiny, bumpy plastic instead of felt, the way the joints divide him into lumpy segments... it's an unfortunate combination of elements. Unless, like, that's your "thing."

Just what Domo was supposed to be. An animated brownie? Excrement with teeth? And why teeth that look like they're designed to eat kids rather than talk to them?