Despite having never seen Giant Gorg, I've owned a few different toys of the character over the years. Most of those toys were unremarkable at best. But then Sentinel announced a collaboration with T-Rex on an unspeakably high-end version of the titular robot. I mean, who wants to drop over $300 on Giant freakin Gorg?

Well, I'm here to tell you that this is an awesome toy, and well worth the price tag.

When I knew that I was going to be reviewing Giant Gorg, I went and searched out a few episodes of the show. Only the first 8 episodes or so were available subtitled, as the series was picked up by Discotek and the fansubbing stopped. I watched them and l have to say that from the episodes I saw, it looked like a great show. The only sucky thing is that Gorg doesn't even make an appearance until episode 4 or so. Because of that, I still don't know a lot about what Gorg even is.

It matters not. Let's get to the review.

First of all, large box is large.

Check out that amazing painted art on the back.

Giant Gorg comes with the option to put two laser cannons on his back, and in my excitement I forgot to take pictures WITHOUT the cannons attached. To attach the cannons, remove the back panels and slide out the front and rear spacers. Place the cannon inside and re-attach. The Hoses plug unto holes at the bottom of the back.

The robot stands over 30cm tall and has a significant weight due to the diecast internal skeleton.

The following image shows the breakdown of materials and parts on the figure. The red indicates diecast. The purple indicates a hard rubber, and the rest are various types of plastic. 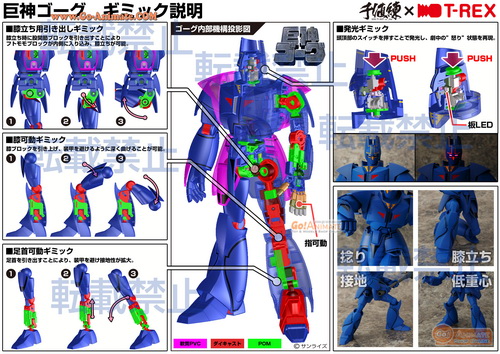 Gorg strikes a mean pose. This thing is SOLID. I cannot stress enough the quality and build of this thing. It's simply amazing. The outer plastic is thick and matte so that it FEELS like metal. The jointwork is smooth like butter and just tight enough.

The head is on a ball joint and features light up eyes that are activated by pressing the button on the top of the head. This activates "Angry Mode"

The shoulders have an outer PVC sheath that is meant to be able to bend and move when you extend the arms. The shoulders can pull out for extra range of motion, and the tight ball joint holds any pose well. The secondary armor on the shoulder is hinged, and it covers a tight bicep swivel.

The articulated hands are well done and can hold any pose you want. However if you desire more seamless hands, two sets of variant hands are included.

The waist is on a ball joint, and has a fantastic range of motion. The hip skirts are PVC, and can bend out of the way when necessary.

Each leg is on a ball joint, followed by an upper thigh swivel. There is also a hidden joint that I did not realize until viewing the cutaway diagram above. Apparently the hips can click down to enable a greater range of motion in the kneeling pose. The knees have an extending joint, as do the feet.

The signature large cannon is included with the set, and it is amazing. I really dug the figure when I started messing with it, but the cannon sealed the deal for me.

The cannon features some great detail including rigid exposed wiring and a moveable bolt.

The clip section detaches and the ammunition is removable.

Included with the gun are three blue projectiles that the cannon can actually fire! That's right, Giant Gorg has SPRING LOADED MISSILES.

Separate the gun mid way and insert a projectile until it clicks. Then re-attach the barrel. Launch the missile by pressing the spring-loaded trigger on top. The missile shoots with a surprising amount of force.

Gorg can also hold the cannon on his shoulder in the kneeling pose. This would have looked better if I knew about that extra joint beforehand.

Also included with the set are three small figures.

Yuu, the protagonist, is posed to ride in Giant Gorg's head.

Doris, the object of Yuu's affection, has a more demure pose that is rather hard to stand. She looks good next to Yuu in the head.

I can't stress enough how great this toy is. I knew from Sentinel's pedigree that it would be good, but it's so good it actually made me care about Giant Gorg. Gorg was originally released in 2014, but re-released in March 2015 alongside the Manon-Type. The two boxes line up to create one giant Yasuhiko Yoshikazu painting.

Great review I still haven't opened mine I just could not resist getting the design. I think I have to get Manon type too. They really don't look like most robots.

Has Sentinel ever put out a sub-par product? It seems like they might be the most consistent company in the game at the moment. This thing looks remarkable.

Sen-ti-nel's super exciting to watch, but they do have instances of QC problems like anyone else. I know Recognizer had a broken Blodia, and I've seen plenty of underwhelming reviews on a variety of their earlier stuff (and more recent stuff as well). Dancouga is out in a month and I think that's gonna be a huge litmus test. To be sure though, they are number 1 on my list of newcomers that I want to see succeed, and their track record for anything with the T-REX name on the box is pretty much perfect.