Miss Monochrome was originally created by singer / voice-actress Yui Horie to serve as a 3D idol at her concerts. Later the character received her own self-titled anime series which as of this review is still available on Crunchyroll. The show follows Miss Monochrome, a mysterious android who is attempting to become an idol in Japan. Sadly her efforts are often thwarted by the fact she is a weird robot who does not quite understand what it means to be hu-man. Each episode is only about three minutes long and is filled with so much charmingly bizarre humor that it's hard not to enjoy all the android antics. 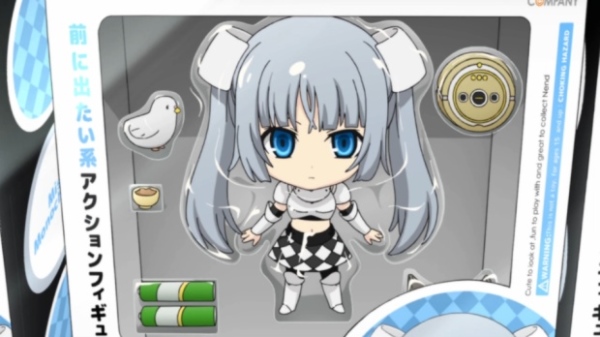 In one episode, Miss Monochrome notices that all the popular idols have their own Nendoroids and decides that she needs one as well. What followed was a weird bit of meta humor as the character got her own figure in the show several months before an actual Nendoroid was announced.

And now here we are with fantasy made real.

Sadly the random bird and tiny bowl didn't make the transition to our 3D world.

True to life (well anime), the Nendoroid Miss Monochrome is an all plastic figure that stands a little under four inches tall. Like all Nendoroids it is a charming SD rendition that is bursting with character. It's certainly as charismatic as a monotone, monochromatic android can be. Also I noticed that unlike with my other Nendoroids, her default arms lack removable hands. However she still achieve some wrist action via elbow swivels.

She comes with the usual Nendoroid stand which is inserted into her back at a slight upward angle. The articulated armature can be plugged into any of the small holes on the clear base or used separately as a stabilizing leg.

Note that her signature twin tails feature a bit of articulation thanks to pair of Good Smile's patented smiling joints.

Accessories wise Miss Monochrome is a fairly light package. She comes with four extra arms, an extra leg with a bent knee, one extra hand, a mysterious gray box, a spare neck joint, an alternate face, her battery box (with battery), and Ru-chan.

Miss Monochrome's default expression is well... her default expression. This blank stare perfectly captures her robotic yet earnest demeanor as seen throughout most of the show. Her faces and head are compatible with most other Nendoroids.

The other face has her playfully winking at the camera as seen in the show's end credits. Simply pop off the front part of her hair to swap faces. You also get a pair of arms posed like a love slinger and the extra leg allows her to look a bit more animated. All of her arms just peg on at the shoulder and can be rotated up or down. Strangely though only this pair of arms features removable hands. Also like most Nendoroids, she uses the same smiling universal joint for her hips and neck which allows for a lot of fun posing options.

This here is Miss Monochrome's trusty companion and vacuum cleaner, Ru-chan! She is a humble Roomba who is roughly the size of a really thick quarter. In the series Ru-chan is much like a beloved pet to Miss Monochrome and dutifully cleans their apartment when she's not accompanying her owner on idol adventures or combining with her Saint Seiya style to save the human race from aliens.

Ru-chan's topside is tampographed with all her mechanical detailing. She looks just like she does in the show!

From this rather lewd angle we can see that Ru-chan has a pair of working wheels! Not that this little disk can roll around too well but it's the thought that counts. I do wish she had her little flip out wall sensors but on a piece this size they might have ended up too small and fragile.

Miss Monochrome's other set of arms are for holding things such as Ru-chan. Again the wrists don't move so the best way to have her carry Ru-chan is to wedge the little robot between Miss Monochrome's chin and hands. The effect is genuinely adorable.

And with a little finagling you can have Miss Monochrome appear to ride atop Ru-chan just like in the anime.

This innocuous battery box is where both Miss Monochrome and Ru-chan get their energy. It is a simple accessory that is fairly accurate to the source material.

The front hatch can swing open to reveal a place for a battery.

The figure comes with a Mangan brand alkaline battery which can be placed inside the box. You just have to wedge in there since the receptacle lacks a peg to secure it.

One glaring omission with the battery box is it lacks Ru-chan's docking station at the base. Sorry little friend...

Miss Monochrome's one extra hand is made for holding the battery. There's a peg in her palm that fits snugly into the accessory.

How both Miss Monochrome and Ru-chan manage to run on the power of a single AA battery is anyone's guess.

The mysterious gray box seen previously has a most intriguing purpose. Using one of two stickers provided you can dress it up like the actual Nendoroid package seen in the show.

Actually fitting one of the stickers over the box can be difficult as each is just one continuous piece. If you don't screw it up (like I almost did) then the result is a Nendoroid box scaled for a Nendoroid to hold. Note that this Miss Monochrome has the correct fake number of 4696. At this rate I have to wonder if the real toy line will get that far within my lifetime...

As you can see, the sticker covers all six sides of the little box and looks quite authentic. There's even a tiny barcode and product information!

Unfortunately the Nendoroid proved to be more popular than the android it was based on. It seems like everybody wants to own a Miss Monochrome! However there may be a silver lining to all this...

"You are the ﻿ｓｐｏｋｅｓｍａｎ  for the US Air Force. People look up to you like an ｉｄｏｌ. Please teach me how to stand out more."

"Er... well. You see it's really the Iron Patriot suit that goes over well with the public. I'm just the soldier who fills it up so to speak."

In the end Miss Monochrome did not become popular in America because no Japanese idol ever does...

The Nendoroid Miss Monochrome is a delightful little slice of meta humor in a solid figure. Like others in the line she is well built and lots of fun to pose. She is made all the more endearing with the inclusion of accessories like Ru-chan and the in scale Nendoroid box. I highly recommend this to fans of the show or even causal Nendoroid collectors as Miss Monochrome truly is the best (potential) idol.

I might need this (assuming a figma isn't over the horizon).

I haven't seen any word of a figma and I think Good Smile figures a Nendoroid is all she really needs.

They made a Nendoroid more meta than Mikudayo.