The Leader of the Autobots needs little introduction to any fan of giant robots. He’s one of those mechs that has stood the test of time with the likes of Mazinger Z, but more so in the hearts of anyone who might’ve grown up in the 80’s, where the character had a lighter tone. Optimus’ design has seen several variations over every incarnation of comics, cartoons and anime series, sometimes a single series would have Optimus go through several body changes (Optimus Primal from Best Wars had a total of three bodies with an additional change in the spin off show; Beast Machines). After three live action Transformers films it’s nice to see the body change formula applied with a refreshing new design or two (Evasion mode Optimus). 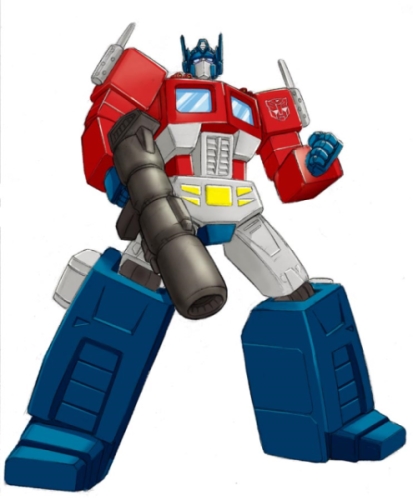 Classic Optimus. Every kid admired him, every trucker wanted to drive him.

Hasbro’s new leader class Optimus gives new life to a seven year old design. I’ve personally had a similar stance to some collectors and have rarely expressed interest in any of the movie line Transformers, but Hasbro seems to be taking new steps to ensure that these toys would appeal to both the average collector and transformers fans alike.

The box is very simple in design. With a large Transformers text on the side, a movie logo on the bottom and a nice image of Optimus wielding his sword.

The back has the usual brief bio and two images that highlight what the toy would look like in vehicle mode and robot mode while highlighting the included accessories; The word of judgment and Vector shield, as well as how they can be stored and displayed in both modes. Also highlighted, is a small image of the new leader class Grimlock.

Lets start with the new Vehicle mode. Away with the old customized truck from the previous movies, Optimus Prime’s vehicle mode is now a fully licensed semi with the “Western Star” text and logos molded throughout.

When I got to meet Optimus In person

I was fortunate enough to have been in Detroit while the Age of Extinction movie was filming and managed to take few nice shots of the Autobot cars that were parked in the lot, comparing the picture of the live truck to the toy shows just how much details were utilized for the mold and paint applications. If I had to nitpick, I’d say we’re only missing plastic headlamps, some more chrome on the hood vents and Western star logo in the back as well as added flame paint applications in the back. Otherwise, everything else is spot on.

Optimus Sparkles !
The paint applications sport the same red and blue throughout with the flame on hood and sides that any trucker would be proud to have. Putting the truck under some added light whilst taking a closer look would show that the blue paint applications have an added sparkle affect, it’s not too much too much to make it looks bad but just enough to add a nice affect when placed under a lamp.

I can’t help but admire how much chrome was added to this guy; the grill and front bumper piece, the gas tanks and side steps, the smoke stacks and the molded lights on the top.

Another added detail are all the Autobot symbols this mold carries, from six the molded ones one the rims to the single painted logo on the left side of the truck. If that wasn’t enough, Hasbro also threw in a feature that’s been long missed in Transformers toys, rubber tires!

The weapons can be stored in this mode, though one is better hidden than the other. The sword is stored nicely under the truck with the use of a slot that holds it in place nicely, while the shield simply pegs into the back. Looking closely at the inside of the transparent yellow windshields, the parts of the robot’s feet that are hidden within create the shape of car seats, I’m not sure if that was an intended added detail or just a nice coincidence, either way it’s a well appreciated touch (que “The touch song”).

Convertible mode !
Before getting into robot mode lets examine the toy’s transformation and hidden parts. This falls into a category that fans of transforming robots have come to call a “shell former”, in which the majority of the body can be hidden inside a shell of sorts.

Looking at the under carriage reveals the legs and parts of the arms, aside from the back pack everything else from the waste up is stored inside the truck. The transformation itself is fairly simplistic and can probably be mastered after a handful of times. My one complaint with the included instructions is that they display how to transform the toy from vehicle to robot mode and then implies that you reverse the steps go take it back to vehicle mode, this would’ve been very helpful if the toy were originally stored in the box in vehicle mode already, the problem being is that it’s stored and displayed in robot mode. Still not a major issue or a deal breaker by any means.

Optimus’ new robot mode gives a bit of a samurai vibe, complete with shoulder pads and side skirts.

A large portion of the body is covered with panels, underneath those are some nicely sculpted robot part details.

The visible chrome found in this mode is the chest piece along with the smoke stacks, some of the other chrome parts can be found in the back and sides of the body. The new chest piece replaces Optimus’ signature windshields look. Very little of the flame paint application are now visible with the exception of the ones on the front sides of the legs and some showing on the sides of the lower body. I might even go so far as to say that a person who is completely unversed with the Transformers and strictly looking at this toy from the front might not recognize that it transforms into a truck, which isn’t necessarily a bad thing.

Light piping is always a nice and welcomed feature when it works this well.

The accessories also fit very well with the new design. Optimus can firmly hold his sword in his hand with the use a peg that fits into the sword’s peg hole.

The articulated thumb that can swivel in and out also helps keep the sword in place.

The sword can also be stored in the back in two ways, either in a straight vertical manner similar to how it was in vehicle mode or slightly tilted, the tilted look can be achieved by moving the slot in the back to a different position.

You know it just got real when you see Optimus reaching for his sword.

The shield can peg into the side of his left arm and looks as though it could be posed as a secondary weapon with that three barreled gun at the end of it.

Articulation wise, Optimus’ can achieve a verity of nice poses but those can be somewhat hindered by the large backpack he carries. The head is on a ball can only move slightly up and down due to the mouth guard in the front and armor in the back of his head that get in the way. The shoulders are on strong ratchet joints that allow them articulate sideways inward and out, there are another set of ratchets on the inside of the body that allow the arms to articulate forward and back all the way around. There is a swivel at the elbow and as mentioned before an articulated thumb to help further secure the sword in place. A swivel at the wrist would have been the icing on the cake but that’s just me nitpicking again. Optimus can turn at the waste, curtsey of the transformation. Ratchets in the legs allow them to go up to a full ninety degrees sideways and just a click further for frontal movement. There are swivels at the knees as well as ratchet joints and this is where things get tricky, because of the extended backpack you’ll have to try to maneuver whichever leg is going back to fit in the gap between the ends of the backpack. The feet have very limited articulation to the sides and can be bent downwards due to the transformation.

“Im doing an epic kneeling pose, no one look up my skirt now!!”

“I’m sorry, but you have to be this tall to ride the Dinobot”

Not every Transformers toy can pull off both a robot and alt mode perfectly, but I believe Hasbro’s leader class Optimus does a great job at both. I’m constantly debating with myself over which mode is better to display him in, as I’m sure any owner of this piece might.

Nice! I've kept telling myself not to buy any more Optimus toys, but I'll be damned if I can pass up an awesome sword like that.

From what I've seen of this figure's transformation, it is still pretty intricate save for the back of the truck doing nothing. The front of the truck especially does a lot to become the legs. I think we can forgive it for some kibble considering that the movie designs have left the realm of plausibility entirely.

Fine..... I will look at it. I have been pretty disappointed considering what they are able to accomplish with Masterpieces. I am sure a lot of that chassis could be dealt with.

I agree it's not on the same level as the Masterpieces. They did a lot for the main body of the truck but just gave up when it came to doing anything with the back. However this review and others have shown me while this Optimus may be a step back in some ways, there is more to it than meets the eye.

I think as far as redesigns go, this is a refreshing take on Optimus and I really do love all of the knight like elements to him. It really makes me think of Optimus like a Paladin or something.

He needs a way bigger sword though.

Great review, but I'm still on the fence with most of the movie line except for the Dinobots and Evasion Mode Optimus.

Prime's new design is brilliant, and it crosses over from what was the standard of the movie'verse aesthetic into something easier to the casual viewer to identify ("Is that a mouth? What am I looking at?" etc) but the toys suffer from having to create two unique things; a truck and a robot. It succeeds in many respects, however the hanging rear wheels on Prime's back just kills it for me.

Personally, I'd like to see a more Robot Mode centered figure. I'm sure if the designers had more time and a collector focused complexity (beyond Hasbro's 8-16 step transformation limit for younger audiences), we'd see something like the Revenge of the Fallen "Voyager" figure.

I know there's an import company making articulated non-transforming figures, but I'm curious to see if Takara will do another "DMK" model unless Kotobukiya gets to do something since they're making an Super Deformed G1 Prime.

If you mean this:

It's a non articulated, crane prize figure but it looks exactly like it should.

Huh. I thought these were articulated, my bad.

The truck mode looks great. The robot mode looks horrific. It is a major step backwards from previous Leader class movie Primes. Put this one next to RotF Prime and tell me which one looks more modern. It's the five year old toy!

The toy is good, but I just can't appreciate it.

I still find the ROTF prime much better designed of the two .