Galvion is an anime series that originally aired in 1984. Galvion was directed by and also featured mecha designs by Koichi Ohata (mechanical designer for Gunbuster). The series was not very popular and its planned run was cut short in japan. The series did not receive much merchandise and was not released on home video until 2013. ARII did produce some model kits for Galvion. Some toys made it to the United States under the Converters toy-line. Takatoku was working on producing a Galvion toy before they went out of business. Prototype toys were produced in very limited numbers and command high prices when they make appearances. More recently T-Rex toys produced a transforming Galvion figure which has been sold both as a kit and completed piece in limited numbers at Japanese events. Below Galvion figures from Takatoku, a trading figure, T-Rex, the converters figure by Mark/Select and the ARII model kit. 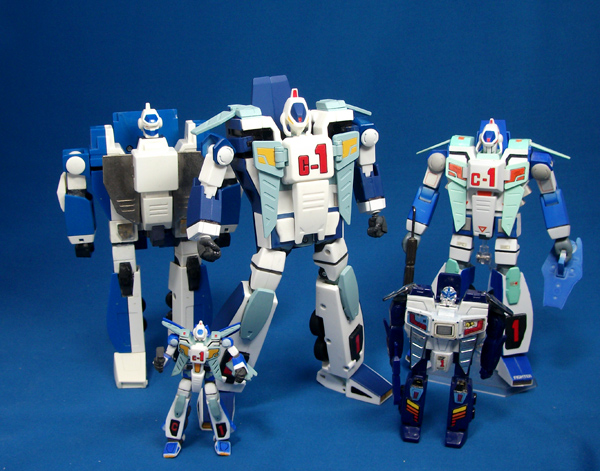 Image is from Dogs Lair

T-Rex henceforth has teamed up with Megahouse to produce the Variable Action High Spec Galvion. This toy is actually quite different from T-Rex's original offering. The figure comes in a nice window box with a magnetic front flap.

The toy comes packaged in robot mode with its accessories in a second plastic tray. Accessories include variant hands, perfect transformation weapons, larger more screen accurate weapons, removable vents for the side of the chest and removable parts for the feet in "powered up mode".

The figure is made entirely from hard plastic with some die-cast. There is a lot of painted detail, which in my opinion is good and bad. The shield clips easily to either arm and dedicated gun holding hands are included for left and right.

The figure's joints vary from frighteningly tight, to somewhat loose. I was somewhat fearful of breaking something during my first transformation. However the joints have loosed somewhat over multiple transformations and the entire process feels better now, the figure is also more durable than it feels. The knees are the weakest joints of the figure and it can easily topple backwards if you are not careful.

The figure can be transformed into a "Powered Up" mode by rotating some parts over the face, lowering some wings, and attaching some parts to the feet. Not having seen the series, I cant really comment on the significance of this form. Personally I don't care for the appearance.

A stand is also included with plugs into the back of the figure. The stand is solid however there is a problem with how it attaches to the figure. The transformation joint does not hold the weight of the figure securely and it often ends up falling forward. This is only an issue for fully airborne poses.

As mentioned before the abundance of painted plastic can be somewhat problematic. Right out of the box the paint quality varies throughout the figure. After transforming the figure once i noticed numerous scuffs and scrapes.

Transforming the figure is complex, but not too difficult once you understand how it works. The included instructions have to be one of the worst I have ever seen for any toy. A large portion of the instructions are dedicated to "Road Attacker" mode, a feature that over-complicates the toy and never actually made an appearance in the series. The mode is not particular solid or visually appealing to me.

In vehicle mode everything locks together solidly with exception of the rear wheels. They must be extended to prevent the underside of the toy from hitting the ground and do not really lock into place well. This could have been really simple but the multi-jointed mechanism for Road Attacker mode really complicates things. A smaller version of the gun and shield are included and can store underneath the cockpit of the vehicle mode.

Otherwise the figure looks great in car mode, the figure has rolling wheels and rubber tires. The windshield appears black but is actually very, very darkly tinted. In earlier prototype pictures it was more clear in appearance. There is some internal detail but it is hard to make out.

If you like Galvion you've probably already bought this toy. If not you should! When are we going to get another Galvion toy? Probably not for a long time. Overall its a good figure with my main complaints being the paint and weak knees. At 14,800 yen it is a bit expensive but I would say worth it for a Galvion fan.

5 comments posted
Been waiting for this review,

Been waiting for this review, thx!

Great review. I have the same paint issues on mine. It's cool that it can transform into Road Attacker mode (the T-REX version couldn't do that) but I also don't care for that mode either. Anyway, just a note, You can slide up the blue cockpit section in robot mode. It slide up a bit and closer to the body making easier to stand.

I'm digging the smooth curves on the vehicle mode.

I like any car that transforms into a robot and still manages to maintain lines like that.

Yet another toy in my maybe list. I was truly hoping that this would be perfect, but I've heard some rough feedback from friends that bought it. Still, aside from vintage model kits or not so accurate vintage toys and KOs, there's really nothing else to pick from.