Metal Armor Dragonar follows many of the same conventions that were made popular by Mobile Suit Gundam. A trio of teenagers manage to get their hands on three prototype giant robots and become instrumental in defeating an expansionist space empire. For example, Dragonar-1 serves as the team's multi-use Metal Armor that excels at close-combat which makes it the analog to the Gundam itself. Next in line is Dragonar-2, which is a bulkier machine that carries a pair of cannons on its back for long-range firepower and is the Guncannon of the group. A while back, I reviewed the Robot Damashii Dragonar-1 Custom, which was an upgraded version of D-1. Bandai followed on from that and released a stylized Metal Armor to represent the enhanced form of D-2. 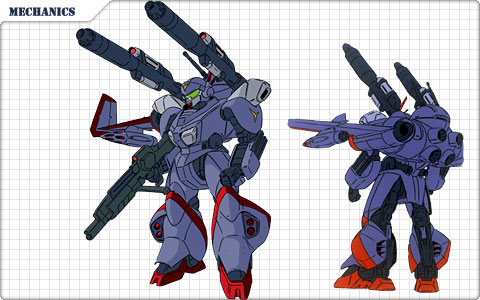 Before I dive into the main review, I just want to introduce readers to what the Dragonar-2 Custom looked like as originally designed by Kunio Okawara. Like most of the Metal Armors, D-2 is a bulky machine that lent itself well to model kit technology of the 1980s. As you may recall from my review of D-1, these toys have gone for a very different style from the base design. Now, let's see what happens when D-2 puts its OBARI on...

The Robot Damashii Dragonar-2 Custom stands about five and a quarter inches tall. Its lithe form is a major departure from the original Okawara design, as the toy embraces Masami Obari's take on D-2. The figure is fairly light, but feels well-built like most Robot Damashii toys.

Color-wise, D-2 is a deep blue that is actually purplish in person. The red stripes and steel gray coloring make of an attractive figure. Rumor has it that the show itself was groomed for an American release, with details like NASA markings on the early design sketches and D-2's pilot being an African-American from New York named Tapp Oceano seemingly confirming such suspicions. While this is probably a coincidence, knowing that Tapp comes from the Big Apple makes me think his Metal Armor is meant to look like a quarterback for the Giants.

Unlike D-1, this figure's backpack is removable so that the toy can fit in the standard size packaging.

The telltale red chin links the Metal Armor to its Mobile Suit cousins. D-2's clear green visor lets you know this machine is cool, but not so cool that is outshines the two-eyed hero robot.

Straight out of the package, D-2's articulation is amazing to the point of bordering on being obscene. Everything you want to move does move, and is free to do so.

Without pesky fixed hip armor like D-1, this Dragonar can more easily pose its legs.

Even the shoulder pauldrons have a multitude of joints so they can easily orbit around the arm. Its only the big red antenna on D-2's head that can knock into things. I would be careful with that bit especially as it's fairly thin and pointy.

Kneeling is no problem for this toy. Honestly, with all this articulation and these smooth moving joints, I could see aspiring mecha artists using it as a pose guide.

And now for a rundown of Dragonar-2 Custom's accessories. Aside from the massive backpack, it has a modest armament that consists of:

- Three pairs of extra hands (splayed, knife-holding, and gun-holding).
- A stand adapter for a Tamashii Stage.
- A handheld 88 mm railgun.
- Two assault knives.
- An extra head antenna, which as far I know is not flexible PVC.
- Twin rail cannons that need to be plugged into the backpack, which I have done in the above picture.

The 88 mm railgun is a hefty looking firearm that features a movable grip and a removable ammo pack on top. Unlike the Soul Spec Dragonars, the extra ammo on this D-2's forearms cannot be removed to be used in the gun and are purely decorative.

The assault knives add an extra bit of visceral intimidation to D-2's image. I always thought that the way Metal Armors use flight packs and combat knives made them a forebear of the Mobile Suit designs in Gundam SEED.

And like with D-1, you can store the knives in a pair of sheaths built into the calves of the figure. However, D-2's knee articulation is not hindered by their presence, unlike with the other Dragonar.

The stand adapter clips under the groin of D-2 and lets you affix the figure to a Tamashii Stage or other stand with a similar peg.

I find the separate stand adapter works best with just the figure itself as the additional weight of its backpack would probably cause the toy to pop off the little C clip.

D-2's trademark backpack has a built in connector for attaching a Tamashii Stage so that it can easily serve as a load bearing point for the entire figure. This huge weapons array weighs about half as much as the figure itself. Thankfully, D-2 is equipped with a friction clip on its back that backpack attaches to with a satisfying "click." It adds a pair of long-range rail cannons, dual wing-mounted missile pods, and a point-defense gun to the Metal Armor.

When Dragonar-2 Custom is fully outfitted for combat, suddenly Obari's slick redesign faces the harsh realities of gravity. It feels like the body of the robot was slimmed down, while the backpack was kept the same size as it was on Okawara's original artwork.

Now, the Robot Damashii figure can stand up in this configuration with its crotch thrusted forward in defiance of Newton's laws, but you can definitely feel the strain on the toy. Also, unlike with the original Dragonar-2, the lifter unit wings are permanently attached to the backpack and can only swing down for ground mode.

The backpack is covered in details and really looks like a functional piece of giant robot equipment. I especially like the vents at the base of each rail cannon, as I imagine an electromagnetically powered projectile must vent something out the back.

A double-barreled point-defense gun rests between the main cannons in a rotating turret. The guns move together as one piece and the whole assembly can turn about 45 degrees in either direction. However, on my figure the turret is a bit tight and hard to move without grabbing it firmly.

The rail cannons themselves plug into free-moving universal joints and can move as far as the design of the figure will allow. They can swing up, down, left, or right and can even spin in place.

While the D-2 is obviously quite back-heavy like this, it is still possible to get some cool poses out of the toy if you have the patience to balance its stance. Unfortunately, all that articulation in its torso can be the figure's undoing if you have the backpack attached, as the free-moving ab joint can pitch backwards, which makes D-2 topple over.

Add in the 88 mm rail gun for the full Super Robot Wars-ready package.

And it's a testament to the figure that its amazing articulation is not completely wasted when the backpack is attached. But as I said before, you have to respect its high center of gravity and adjust it accordingly.

A Tamashii Stage certainly helps, but I would recommend one of the heartier ones like the Act 5 to deal with D-2's heavy weaponry.

While up in the air, the engines and wings can rotate a full 360 for maneuvers and some VTOL action.

You can also get one of the knife holding hands around the rail gun's foregrip for classic rifle aiming poses. It's actually fairly easy to slip the handle through the rectangular hole in the fist. Also, the figure's universal jointed wrists make this particular feat much more doable that it would first appear.

The Robot Damashii figures of D-1 and D-2 look great together as their shared Obari styling makes for a cohesive unit. All I need now is Dragonar-3 to complete the team as they appeared in the latter part of the show.

The Dragonar-2 Custom is the kind of toy that offers two different experiences depending on how you equip it. Without its signature backpack, the toy is an amazingly articulated robot that is really fun to pick up and pose. When geared up, the D-2 has that striking level of 80's anime excess that can easily match the badass goofiness of modern designs. While the fully outfitted Dragonar is blatantly unbalanced, that does not make the toy difficult to enjoy. While I don't begrudge Bandai for adhering to Masami Obari's fan-favorite rendering of the design, I kind of wish it more resembled his version of the regular Dragonar-2. That is the D-2 that became the web exclusive Soul Spec figure that was meant to accompany the "Opening Silhouette" Dragonar-1 and had more evenly distributed bulk that worked better on a toy. Looking at Bandai's treatment of Dragonar as a whole, it is interesting to see how different aspects of the original designs and even variations of Obari's own artwork have influenced these modern action figures.

When it comes to Metal Armor Dragonar, I've enjoyed what I have seen of the anime and am always happy to see the D-team show up in crossover games like Another Century's Episode. It's a straightforward series with very accessible robot designs that also make for cool toys. A pleasing sense of simplicity surrounds the whole property and I very much enjoy that about Dragonar.

I never imagined that this figure was so cool, rail weaponry, jet backpack, combat knifes; It has it all!