Aldnoah.Zero is a sci-fi mecha anime that depicts the war between the United Earth government and the Mars-based Vers Empire. Both sides employ giant robots called "Kataphrakts", with each martian machine being a technological marvel armed with fantastical weaponry. By contrast, the Terran equipment is decidedly more "down to earth." with the the dust-brown KG-7 Areion serving as their mainstay Kataphrakt. 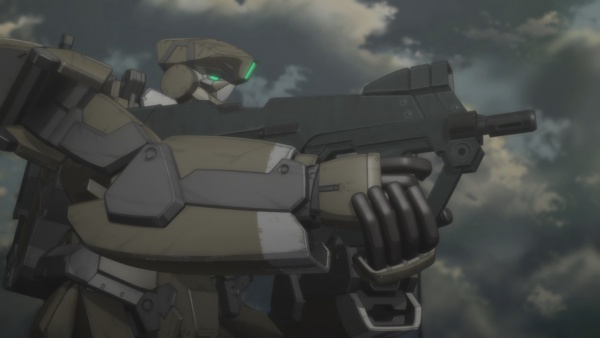 The KG-7 is a reliable machine that will *not* explode when piloted by Inaho's family or friends.

In the time since it ended, the series has received a modest amount of merchandise, with Megahouse offering up action figures of some of the mecha via their Variable Action toy line. Their first release was the trainer type Kataphrakt, the KG-6 Sleipnir, otherwise known as "the orange one" used by protagonist, Inaho Kaizuka. That toy would be used as the basis for machine's successor, the Areion, which was released as a semi-limited exclusive which could be purchased through certain retailers in Japan. The Variable Action series is somewhat infamous for the variable quality of its products, so I wasn't sure what to expect with this figure. So let's drop in to the combat zone and see if Megahouse delivered some grunt mecha goodness.

The Variable Action Areion stands a hair under six inches tall, and has roughly the same fit and finish as a Robot Damashii figure.

For purposes of comparison, here is the Areion next to the Robot Damashii Stark Jegan. And honestly, if it wasn't for the branding on the box, I would have just assumed that the KG-7 toy was part of Bandai's prolific toy line.

While it is true that Megahouse is a subsidiary of Bandai, I believe this toy and its predecessor, the Sleipnir, are the first action figures of theirs which have approached the quality of their parent company's products. The KG-7 itself is a functional, but still attractive looking, design that mostly lends itself well to being a poseable robot toy.

I say "mostly" because the Areion carries a pair of large folded-up wing units attached to each thigh. They look suspiciously like Shoji Kawamori-style hip thingies, but are not linked to any alternate mode.

As you can imagine, this makes balancing the figure a bit tricky if you want the boosters to remain off the ground. This equipment actually comes separate from the figure in the box, so you could just leave them off entirely. However, doing so would be cheating, and you don't want to be a cheater, do you?

The boosters plug into each thigh with a sturdy ball-joint connection, which allows them to be re-positioned for various poses. Also, I appreciate the extra engine detailing inside each booster, as it complements the mechanical look of the design.

Also, note that the pair of wings on each unit simply slot into the booster, and are made to be removable. I noticed one of the wings on my toy likes to fall off on its own, and that someone at the factory tried to beef up the connection with some clear glue, with less than stellar results. It's not a huge problem, just something to be aware of when posing the toy.

The key to keeping the Areion upright is knowing that its hoof-like feet have both a double-jointed ankle setup and a movable heel. The back of the foot tilts to one of two positions with a soft click, with the flattest angle providing the most stability. It can be hard to notice at first, but once you realize this quirk, posing the toy becomes a lot easier.

Other than that, the KG-7 is a fully-featured modern mecha action figure. Its arms possess a full range of joints, which all move with a pleasing smoothness to them. The toy also has a ball-jointed waist for giant mobile infantry style moves.

And as with many current robot toys, the entire shoulder block can swing out from the body to help bring the Areion's arms together.

The head rests on a single ball-joint and does a decent job of letting the "real robot" head unit look around at things. One unfortunate aspect of the figure is a visible seam down the white part of its face. It's not the most heinous flaw, just something to be aware of if you are the type of person that stares deep into the eyes of their action figures.

Each knee can be bent nearly 180 degrees back, thanks to a double-joint setup. The top part even reveals a delicious-looking accordion-style detailing that adds an extra layer of "realism" to the design.

All in all, the Variable Action Areion is a fun figure to pose, even if it is a bit top heavy. Its ball-jointed hips can splay out far enough to give the leggy Kat a wide stance.

And those tall shins make the toy look pretty cool when kneeling down.

Megahouse outfitted their figure with a modest array of accessories. You get a pair of extra hands for holding firearms, two assault rifles (with optional grenade launcher), a large sniper rifle (with two bipod parts), a small pistol, a pair of knives, two articulated wing joints, and a posh display stand.

The weapon-holding hands are in a fairly relaxed position, which lets them double as calm hands for letting the pilot exit the cockpit for a breather.

Terran Kataphrakts use this beefy looking bullpup type rifle, which is represented here by an all-plastic accessory with a painted green sensor and black inside the barrel.

The toy can brandish the gun with no real issues, other than figuring out how to maneuver the giant butt end.

Each gun can be outfitted with an underslung grenade launcher, which simple slides onto a rail underneath the rifle's own barrel.

Inaho's older sister, Yuki, is herself a pilot, and would totally dual-wield grenade launchers to help protect her source of delicious breakfast omelets.

The combat knives fit in the more closed default hands, and doing so may take some effort, as the slot between the sausage-shaped fingers may be a bit tight at first.

"I don't care if you can shoot lightning, clone yourself, literally make matter disappear, I'm gonna CUT YOU!!"

With knife in hand, a KG-7 can make a very brave (or foolish) charge against an enemy Kataphrakt.

For more backup weaponry, the Areion comes with a tiny little pistol. While it looks kinda dinky in the toy's hands, I can't help but imagine how large it'd have to be if the robot itself is 40 feet tall...

Huh, I recognize that stance.

Combine the pistol and knife for a little CQC action. Terran Kataphrakt pilots should at least be capable of Cold War combat techniques.

When the Areion needs to bring out the big guns, it grabs a hold of this... bigger gun. The sniper rifle fits loosely into the toy's hand, but can be held against its body for carrying poses. Underneath the body of the gun is a movable bipod mount.

The weapon works fairly well with the Areion nestling up to it in the classic sniper position. You can swap the straight-legged bipod for one with angled legs, but mind the delicate C-clip connection point.

Lastly, the included display stand plugs into the robot's groin. It is similar to a Tamashii Stage in terms of function, but in practice I find it to be a step above Bandai's ubiquitous accessory. The base tilts forward and back, but only if you squeeze the buttons on either side of the joint. In addition to that, the upper point where it attaches to the figure has its own ratcheting joint for extra stability.

Plus the base itself sports not only a cool Aldnoah.Zero logo, but also the United Forces of Earth (UFE) emblem along with the robot's name printed in military green.

And now it's time to talk about those ever-present wings. To change the Areion to hover mode, first pop off the static inner joint of the booster unit.

The next step involves swapping the wings over to a fully functional joint array. Each wing is removable, and simply slots in to either the fixed-pose or moving booster joint. It is possible to just use the articulated wing joints all the time, but doing so may make the boosters more cumbersome for standing poses.

With the movable wing joint attached, you can also use the movable armor guard on the front of the booster. The kneecap looking piece is mounted on a hinge that can travel up and down along a tiny plastic rail. It's a cool bit of toy engineering, marred somewhat by the fact that the armor piece can pop off the rail while you're moving it. You can reattach it just as easily, though.

With its wings unfurled, the Areion is ready to fight ON THE BOUNCE as Robert Heinlein intended.

Both the Sleipnir and Areion have a rather unique way of doing the requisite giant robot boost jump maneuver, but the latter has more compact wings for less silly looking practicool moves.

You can get the toy into some cool mid-air poses, and the unconventional wing setup gives the unassuming grunt robot a unique feel.

The Areion jets through the air on mechanized dragonfly wings. It certainly gives the robot a cool silhouette.

The KG-7 Areion: proudly doing its job (when the plot allows).

Overall, I am very pleased with the Variable Action Areion. Megahouse was able to take a low key grunt mecha design, and turn it into a fun and engaging figure. There really aren't that many Robot Damashii-alikes in this market, so I was surprised to see one come from Megahouse of all companies. Unfortunately, being a non-Bandai product comes with a price. Specifically, the MSRP for Areion is 7,300 yen, which is a lot for the equivalent of a mid-range Robot Damashii toy. And while the toy doesn't appear to be holding its value, its somewhat limited release can make it hard to track down for a good price. I was able to get one for around $45 USD, and for that price I think it's a solid buy.