Sushi Squadron Shallyders is a new toy line from TakaraTomy as part of their A.R.T.S. brand. Basically it's sushi that transform into robots and fight each other, and it's completely awesome.

Sharida (or Shallyder) Saba is a Mackerel type of sushi. This type of Sushi is "Nigiri", which means a piece of food on top of a bed of pressed rice. Saba means Mackerel in Japanese.

*Shari is the name for Japanese sushi rice, hence the name "Sharida"

Once again, the package is a nice resealable clamshell.

In Sushi mode, Saba has a nice, smooth Mackerel top, however the base fails to convince that it's a bed of pressed rice. It just looks too mechanical.

In robot mode Saba is pretty badass looking. He's only got articulation at the elbows and shoulders, but he remains expressive for a transforming snack. He's even got the kanji for Sushi (鮨) on his head.

There's a bunch of stickers that need to be applied but I find that after about a week the stickers have begun to fall off. This is most evident on stickers that wrap around corners.

If you remove the shell you can fold out the Sabuzaka gun.

The same gun can be removed and used as a hand-held weapon.

The big slab of Mackerel can be removed and used as a shield to defend off attacks from other pieces of food.

Finally, included is a game disc whose rules remain a mystery to me.

This line is great, weird cheap fun. There are 4 other Shallyders, all with different kinds of fish but the same core bodies. Get them all to create the Sushi Squadron Shallyder!

What a wonderful, cute successor to the old Microman Microchange stuff. Micro-sushi! Also his color scheme and head look a lot like Tigatron from Beast Wars. Oh no! 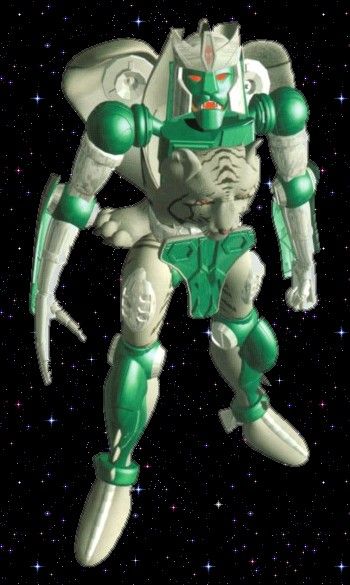