Tsutomu Nihei's Knights of Sidonia is seen by many anime and manga enthusiasts are a throwback to an earlier era, when space battles, talking bears, and squeaky aliens could all coexist in an galaxy-spanning space opera. The series' main mecha, the Gardes (written as 衛人 or "Morito" in Japanese), embody many of these qualities, with a design that is exotic in feel, while simultaneously looking like a plausible weapon for space combat. Among the Sidonia colony ship's proud knights, one Gardes stands out from the rest as another throwback to a different time: the Type 17 Garde known as the Tsugurmori. 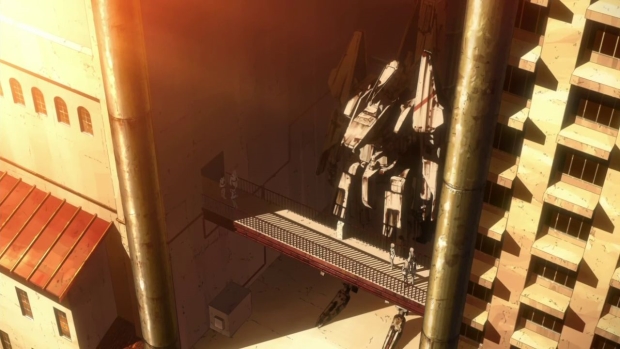 For many years, the Tsugumori stood inside the Sidonia ship as a public monument to its legendary pilot, Hiroki Saitou.

Sidonia's main protagonist (and poster boy for head injuries), Nagate Tanikaze, takes the Tsugumori as his own personal machine after having trouble adjusting to the modern autopilot-assisted Type 18 Garde. This has the dual purpose of demonstrating Nagate's piloting skills while also giving the series a "hero" robot to focus merchandise around.

The figma Tsugumori is the second action figure to be produced of the character thus far. As far as fidelity to the source material, this toy is very faithful to Nihei's lanky no-frills mechanical design. Like all figmas, it is built from solid chunks of PVC connected together with ABS joints. The Tsugumori's body has a slightly rough texture to it, with the main color being off-white with a matte finish. It measures about 6.75 inches tall from the bottom of its feet to the top of its shoulder pads, making the figure a bit bigger than most figmas.

As a robot optimized for space combat, the Garde's backside is dominated by its massive main engine.

This polygonal rocket engine attaches to the main figure via a huge square peg on the Tsugumori's back. Additionally, a set of movable struts at the top of the booster slide onto a pair of pegs just behind the figure's head. A movable thruster-equipped "coat tail" can then be plugged in just under the main connecting tab. When the Garde switches to "Acceleration Mode," the booster is moved into the upper position. I would recommend detaching the coat tail before moving the main engine, as doing so allows the backpack to detach from its connecting peg without having to unclip the strut pieces

Truth be told, I wasn't very keen on this figure at first. The humongous backpack and tiny feet made me roll my eyes at yet another toy that I assumed would keep toppling over as I tried to pose it. Thankfully, it turns out the figma Tsugumori is quite easy to handle, and has a very good sense of balance. The design itself is built around being in a "heroic" stance with hips placed slightly ahead of its legs, with the result being a robot that looks solid and regal, even in a neutral pose.

Nihei's minimalist aesthetic is faithfully reproduced with this figma, with the only splashes of color being a few red stripes on the Type-17's body and a touch of blue for the robot's "eye."

Articulation-wise, the figma Tsugumori is capable of a very wide range of poses. Each arm features a universal joint in the shoulder, bicep, elbow, and wrist, which allows the boxy limbs a surprising amount of flexibility.

The fact that the entire arm can move separately from the pointy shoulder pads does wonders for the toy's range of motion. There's even a little wiggle room where the bicep meets the shoulder, thanks to a ball-joint connection. Unfortunately, the neck is somewhat lacking in comparison to the arms, as a thick "throat" piece prevents the head from turning too far to each side unless you pull the inner joint up and out from where it pegs in. On the plus side, the Tsugumori's head can look up pretty far, which is handy for doing stuff in space. When manipulating the figure's noggin, try to grab it from the main rear of the head rather than the thin panels around the "face."

Large movable armor blocks cover the outside of each knee, and move independently from the main joint. A secondary knee guard in the form of a long gray panel can angle in and out on its own hinge for added dynamism.

A pair of ball-shaped universal joints serve as the figure's hips. From the outside, these are covered by cylindrical cover pieces, that do an okay job of moving along with the hip's rotation. The covers can scrape against the gray-colored inner groin area, though, so be aware when posing to avoid dings and dents.

The Tsugumori also features a fully functional waist joint, that can rotate as far as the backpack and coat tail will allow. I find it's easy to use this bit of articulation when the main booster is in its raised position. The upper body can also tilt up and down a bit.

All-in-all, the figma Tsugumori's range of motion is well above par for a toy its size. You can even get the toy into a pretty good kneeling pose, which is the true test for any "real robot" figure worth its weight in PVC plastic.

For accessories, the figma Type-17 includes an alternate head with its face panels spread open. Now the Garde is ready to fire its head-mounted Heigus Particle Cannon.

The only thing that would make this better is the addition of a beam effect part.

A pair of High-Frequency Blades can be plugged onto each forearm. These snap in right between the arm and the flat shield on the side.

These blades were generally used as a defensive weapon for cutting through the deadly tentacles that sprout from the Sidonia's vicious space monster adversaries: the Gauna.

Included with the toy's myriad of swappable hands is this one that has a thingy near its thumb. Now, I haven't seen the series since the anime aired, so forgive me if I can't recall what this little nub is supposed to be. I think it might be a bullet used in the Garde's projectile weapons, but I'm not sure. Props to Max Factory for going to full screen accuracy with the accessories though.

And speaking of hands, the Tsugumori comes with two different pairs for holding its primary weapon, the Kabizashi spear.

True to the series, the tip of the spear depicts the kabi shard bonded to the weapon's shaft with repurposed Gauna flesh. It's a neat bit of detailing, accomplished with some subtle sculpting and alien flesh-colored paint that features dark splotches for extra organic weirdness.

The two pairs of spear-holding hands differ in the size of the hole between their fingers. One set has a tight grip, while the other is much more loose. Using both types of hand in combination allows the Tsugumori to wield the Kabizashi much the way a real knight would.

Kabi shards are one of the few things that can pierce a Gauna's core, which will cause the whole creature to disintegrate.

To recreate this grisly end, the figma comes with a brain-shaped Gauna core, which slides on over the spear's tip. Like the organic part of the spear itself, the core looks appropriately fleshy and gross.

And remember to slow-roast your Gauna core to maintain its full flavor.

Attached under the figure's right forearm is a tiny missile launcher. All you need to know about this weapon is that it has to be removed before attaching the Tsugumori's other arm-mounted weapon.

As the series progressed, engineers aboard the Sidonia found a way to mass-produce anti-Gauna projectiles, which could be fired from a Ballistic Acceleration Device (read: rail gun). The figma stays true to the Garde design and includes this huge rectangular weapon that replaces the tiny forearm launcher.

The gun is easily as long as the figure itself is tall. And while the connection between the weapon and the Tsugumori's arm is quite sturdy, you will need the support of the other hand to keep the gun pointed forward.

Still, you can get some really cool poses with the Tsugumori bracing itself before taking out Gauna at long-range.

Like practically every figma to date, the Tsugumori comes with the same display stand as the others. Rather than plugging directly into the toy, the stand uses a Robot Damashii-style clip piece that slides in under the figure's groin. While the figma stand does an admirable job holding up the heavier toy (after tightening the screws), I would recommend using a sturdier stand with a compatible peg (such as a Tamashii Stage) for long-term display.

All Gardes switch to Acceleration mode for long-range cruising. Here, the figma replicates this with the aforementioned movable backpack and an exchangeable tip for the booster. In this form, the Tsugumori looks like a little tin man with a huge rocket on his back, not unlike Buzz Lightyear.

Even with the added weight of the rail gun, the stand can support the Tsugumori in flight poses.

I really love how this toy displays on the stand. The design has that perfect sense of "practicool" space combat, and the toy captures this aesthetic extremely well. While I've seen a lot of people compare the Gardes to the Mortar Headds from Five Star Stories, I think their more minimalist form bares a greater resemblance to the titular Hyper Dual Armor Thexder, from the old PC action game.

The hero's Garde stands strong against the Gauna, protecting its people from those who would wish to destroy the last remnants of humanity.

The figma Tsugumori is a toy that happily proved to be the opposite of my initial impressions. While the line is not especially known for mecha action figures, Max Factory did a commendable job with their rendition of the Sidonian hero. Those looking to get a complete toy of the show's main Garde will not be disappointed by the figma.