Kinnikuman is the kind of series that manages to combine goofy pro-wrestling drama with some genuinely tense fights. With characters that range from iffy stereotypes (Ramenman) to pure strangeness (Urinalman), somehow their bouts carry a lot of weight and elicit real emotions from the show's passionate fans. In many ways, this philosophy is personified with the superhuman wrestler known as Warsman... 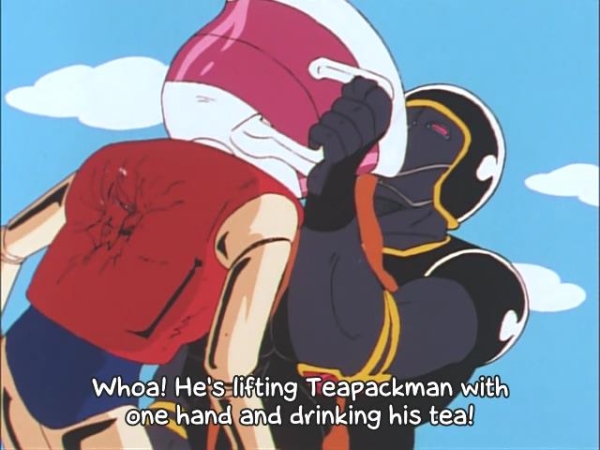 He's the kind of guy who will drink your tea, even if it's basically your lifeblood.

Warsman has a very bizarre backstory. Originally from the Soviet Union, he was born a half-robot and half-superhuman (no, really) and was relentlessly picked on for his ugly face. The little boy fought back against the bullies and vowed to become a champion for the weak. Years later, another vengeful wrestler would train Warsman to the brink of insanity in order to create a challenger that could utterly defeat Kinnikuman.

And to keep things in perspective, remember that Kinnikuman himself is a dopey idiot who can't stop singing about how much he loves gyudon...

Anyways, the S.H. Figuarts Warsman is a downright beautiful figure. He stands six inches tall and has the black and dark gray color scheme from the anime. The brutal wrestler is a huge fan-favorite, so it's no surprise he was the second Kinnikuman Figuarts released, even beating out Robin Mask.

As far as I can tell, this figure shares no parts with Kinnikuman. Even areas that could just be repeated (like his thighs) have a different musculature.

Like Kinnikuman, Warsman comes pre-posed in his box in a menacing stance, with one hand brandishing his trademark Bear Claw. One look at Warsman and you can immediately see why he's so popular. In fact, the Soviet wrestler is the reason I started watching the Kinnikuman anime. I'd seen a bunch of pictures of Warsman toys over the years, and wanted to find out more about this cool looking superhero dude. And honestly, I am not a fan of pro-wrestling at all, but there's something about this crazy show that keeps me entertained.

Fortunately, Bandai seems keen to reward both longtime muscleman fans and neophytes alike, as Warsman is just as good as (if not better than) the titular hero. He feels solid and is loaded with smartly designed articulation, which allows the Figuarts Warsman to pose just as the character would in show.

As typical for this line, Warsman comes with few accessories. He has two pairs of hands (fists, and splayed hands with hinged fingers), with a two types of guards for each side. One set has the aforementioned Bear Claw, while the other is a normal plate. Note that the size and orientation of the two connecting tabs means that a left guard can only go on a left hand, and a right guard can only go on a right hand. Try to press them down firmly to help the guards stay attached to the hand.

It is in this minor gimmick that the toy falters a bit, as changing out the hand guards is a bit annoying, and they don't stay on as tightly as I'd like. Since these wrestlers are meant to be posed in a variety of crazy moves, it's no fun when a tiny part pops off the hands every other time you touch them.

Griping aside, when the Bear Claws work, they really add the perfect amount of menace to Warsman's already intimidating appearance.

Warsman also comes with three heads in total, all of which have different expressions. His default head has his piercing red eyes set in a slight scowl. All of the heads pop on and off the figure's ball-jointed neck with ease.

The second head subtly changes his expression to show some fatigue as he perspires on top of his mask (because that's how this show works). Warsman's eyes are also sculpted with one bigger than the other, as if he raised an eyebrow.

When faced with an especially difficult opponent, the brutal wrestler cracks the terrifying Warsman Smile.

It's at this point that Warsman is on the brink of madness and starts attacking with berserker-like intensity.

One deliberate omission in the face department would be the lack of an unmasked face. While Warsman has been seen without his creepy black mask a few times, Bandai decided to include the unmasked head with their Figuarts Neptuneman. Presumably, this was done because Bandai is annoying like that... Er, I mean, they wanted to emphasize the bout between Neptuneman and Warsman, where the latter was dramatically unmasked by the former.

Get ready for an amazing match between the cold-hearted wrestler from the Soviet Union, Warsman, and the gyudon-eating champion of Japan, Kinnikuman!

For this event, the play-by-play will be handled by Mr. "Aderans" Nakano.

Oh! Warsman goes for a knee to the groin! That's an illegal move!

When two Kinnikuman Figuarts face off, their design and build quality really shines. The toys can wrap their limbs around each other (in a manly way), with the grace and dexterity of a real wrestler.

"Huh?! He's attacking me with the Tower Bridge! That's one of Robin Mask's moves!"

Like the Figuarts Kinnikuman, the Warsman can totally lift another figure above its head without the aid of a stand. Just make sure the canvas has enough friction to support this feat.

Ooooooo! Kinnikuman pulled off a skilled counter and is now escaping the Tower Bridge!

Warsman counters with his deadly Bear Claws, but Kinnikuman keeps his distance!

Warsman rushes in and gets Kinnikuman in a headlock! What a bold move!"

"Gyaaaaaah! Get offa me, you weird robot! Your breath smells like borscht!"

"Aaaaaand off you go!!

Amazing! Kinnikuman managed to throw Warsman off as if he were an angry cat!

The Soviet superhuman is down but not out! What strategy could he be calculating in his Fighting Computer?

Amazing! He leapt into the air and is now performing the deadly SCREWDRIVER!

While Warsman does not have a place to attach a Tamashii Stage, the regular figure clamps work well around his muscled abdomen.

Warsman is looking to finish this match with his trademark PALO SPECIAL!

One reason the Kinnikuman Figuarts are so articulated is because they have to be able to execute some very complex holds. Warsman's Palo Special (named after Jackie Pallo), involves him wrapping his legs around an opponent's thighs and then pushing their arms forward in attempt to dislocate them. As you can see, both figures are able to emulate this impressive display of superhuman wrestling skill.

What an upset! Kinnikuman is down and Warsman's smile is still there! Will he attack someone else if Kinnikuman doesn't get back up?

Warsman is another solid win for the Kinnikuman S.H. Figuarts line. Aside from his fiddly Bear Claw gimmick, the toy has top-notch build quality and is a joy to pose. Plus, Warsman is just such a cool design that any figure of him is instantly eye-catching and has a lot of presence in the ring or on a shelf. I highly recommend this toy.

I love 'em! One of my favorites from the old MUSCLE figures, back in the day. So glad Figuarts is doing these! I'll have to grab Warsman when I get the chance.