Gelbros J3 is a kikaiju from episode 32 of Mazinger Z.

Previously existing in toy form only as an action figure produced in Argentina by the company Playful, it got it's first soft vinyl rendition this year in the form of a throw back to the classic Jumbo Machinder villains of the 1970s. Produced by famed Japanese toy store Mandarake, the toy was available in Japan as a festival exclusive in early July and internationally via a lottery drawing later that month. However, I have yet to hear of a single person who entered the lottery and didn't win. I don't know if that means that they didn't sell well at the festival or if not enough people entered or if it was simply a disguised pre-order. Regardless, the toy is arriving in the hands of collectors everywhere this week.

First, I'll look at the packaging, which is designed in the exact style of the original first series jumbo villains. I emphasize exact because when placed next to the original, it blends right in. This is in stark contrast to the Unifive Garada K7 jumbo which was inspired by, but very unlike, those boxes.

The only real difference comes in the form of the labeling. Needless to say, this is not an official Jumbo Machinder since that brand no longer exists and therefore cannot be used on the box. It is licensed from Dynamic Productions and Toei Animation though so the name of Mazinger Z is inserted in place of it. Close enough, I guess.

Mandarake's information is printed on the bottom of the box.

The toy itself stands at 20.5" (55cm) tall and is made entirely of thick, sturdy vinyl.

Unlike the previous 3-headed villain toy, Rokuron Q9, Gelbros J3's heads all connect directly to the shoulders of the toy, rather than being separate plastic pieces that are attached via screws. This gives the character a more solid look but necessitates a wider torso.

There are 11 points of articulation on the toy. Each head has 2 (at both ends of the necks), the shoulders, knees and waist. Having the knees turn as opposed to the hips is a departure from the vintage style.

Menacing spikes protrude from both arms as well as the back of the neck of the middle head.

Speaking of the heads, apparently each has it's one attack feature in the show.

Copyright and character information is etched into the bottom of the feet, just like the original toys.

The brightly colored paint job, while being anime accurate, tends to make the toy really stand out from it's vintage brothers. The sculpt appears somewhat bulbous in parts as well, giving it a slight designer vinyl vibe. However, I firmly believe that pictures do not do this toy justice, nor does standing it next to the original villains. In person, and taken on it's own merits, I find it to be a very impressive toy. 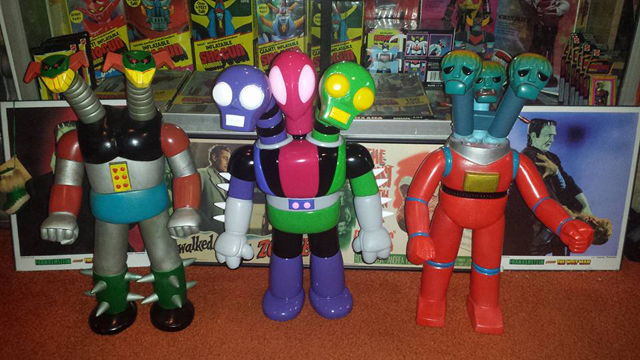 Personally, I feel like this toy is much better than Unifive's much maligned attempt at reproducing a Garada K7 villain, but that it still doesn't fit perfectly with vintage villains, either because of the sculpt of the shiny new paint. Still, I'm more than happy to have it and am hoping other villain characters are released.

Great review. While Jumbo Machinders and Vinyls aren't my thing, it's great seeing somebody making bad guy or adversary bots for a change. Oh and thank you for that video clip. It finally explained the markings on the SOC AphroditeA's Boob missiles, and the SOC Mazinger Z's creepy Boob Grabbing hands to me.

So glad that you brought this great looking jumbo to my attention! I put in an order immediately after catching this review.

These are the kind of figures I've been waiting all these years for since the U-5 K7. Speaking of that figure, I disagree with your take on Garada. I love my Garada U-5 in the PX colorway. No, it's not a ball shooting replica of the original, but I see it as a similar update version much like this one appears to be. I wasn't aware of U5's attempt being much maligned lol. K7s are getting much harder to find either way.