Muv-Luv Alternative: Total Eclipse has the distinct honor of being the first entry in the Muv-Luv universe to get a full length animated adaptation. Unlike Alternative itself, it did not begin as a visual novel PC game but as a series of light novels with an accompanying manga adaptation. A light novel is essentially a serialized story that will first run in various anthology magazines and is later collected into a series of books. Other properties like the popular Full Metal Panic series began as light novels and continue to prosper in that market. The popularity of Total Eclipse lead to it being adapted into a show and later receiving a full fledged visual novel. For fans coming into the series through the anime adaption, it can be quite surprising to see merchandise that predates the TV series by almost five years.

As mentioned previously, Total Eclipse was closely tied to Volks and their A3 line as it greatly increased the number of Tactical Surface Fighter designs that could be realized as toys. In fact about a third of the line is made up of different TSF's that were featured in Total Eclipse, which is quite impressive for a series that didn't even have a TV show yet. 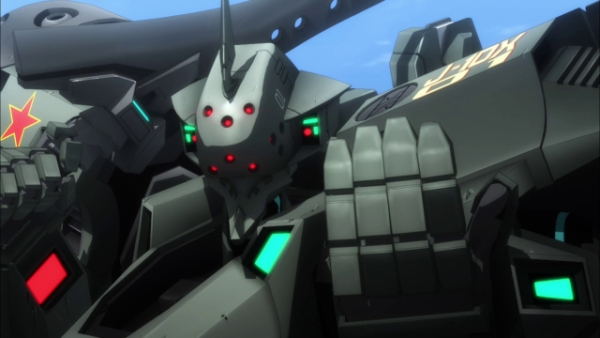 In the Total Eclipse TV series, the members of China's Bao Feng Test Flight burst onto the scene with their olive drab colored J-10's as they cut through swathes of BETA aliens with their close combat prowess. Later they would come to dominate the mock combat matches arranged between different nations during the Blue Flag exercises. During a match against Argos Test Flight, Cui Yifei directly challenged Yuuya "Jeff" Bridges to a one-on-one duel.

Please check out my video review!

The J-10 (also called by its Chinese name "Jian Ji 10" on the box), is the thirtieth release of the A3 line. It was released concurrently with one of the F-16 Fighting Falcon toys of which it shares some parts. Like most A3 figures, the J-10 is about six inches tall and is made primarily out of PVC plastic.

The J-10 is a very svelte design as expected of a light Tactical Surface Fighter.

As I mentioned before, the J-10 and F-16 were released around the same time and share a few parts. As a result they appear quite similar (I mean more so than usual). In real life the J-10 and F-16 share a tenuous connection and have a few similarities like a single air intake and one large vertical tail fin. Those into obscure airplane trivia (like me) may recall the F-16 was chosen by the Israeli Air Force over their homegrown IAI Lavi. The Lavi was initially developed with the help of the American defense industry and took some cues from the F-16. When the Chinese J-10 emerged, it's more than passing resemblance to the Lavi made some analysts wonder if there was some backdoor dealing that gave Chinese engineers a good look at the canceled Israeli aircraft. Thanks to their luv of minutiae about 20th century warplane development, a very similar story occurred in the Muv-Luv, universe. The robotic version of the Lavi looks very much like a halfway point between both designs.

Of course what does all that mean for the toy? It's good news thing as the F-16 is one of the most well designed and highly articulated figures of the A3 line, and the J-10 just as excellent.

The upper body is where the J-10 divergences greatly from its distant cousin as it features the distinctive "fact sphere" style face and shoulder pads adorned with numerous tiny verniers for extra maneuverability. There's a bit of design symmetry with the multiple eyes mirroring the scattered shoulder verniers.

A friend of mine is now swooning.

The handful of Chinese TSF's all eschew the typical narrow visor type eyes in favor of this more inhuman compound eye setup. The head has a few vestigial features of the F-16 like the bank of sensors on either side and adds a few details of its own like a stylized antenna in the middle of its forehead.

The multitude of tiny red eyes even carries over to the back of the head.

Articulation wise, the J-10 is nearly identical to the F-16 with its numerous A-Lock joints in the arms. Again there is both a universal joint in the should and also at the top of the bicep just underneath the shoulder pad. While the wrist the swivel just as before, the large protruding sensors on the forearm impede rotation. You can cheat a bit by pulling the hands out slightly though.

Unlike the F-16, the J-10's shoulder pads move separately from the main arm via a simple hinge.

You still get the same free moving waist joint combined with a titling chest joint. I must note that like on the F-16, it's fairly easy to separate the J-10's torso from the lower body. The fit is tighter than on my gray F-16 though and generally doesn't come apart unless I pull on it. Just be aware you should hold the J-10 by its lower body otherwise it could come apart. This is not really a flaw but more of a weird quirk of these particular A3 figures.

The J-10 also has the same excellent leg articulation as the F-16 which allows for a lot of wide legged poses. My only complaint on the J-10 is that the hinged skirt armors are a bit tight around the codpiece and can get hung up when moving.

Kneeling is no problem for the J-10. Also be sure to mind the sharp spikes on the ankle guards as they could definitely prick your finger!

The J-10 has a rather generous number of accessories as it comes with a full compliment of swords and guns for both its hands and the back mount pylons.

Again the similarities between the J-10 and F-16 carries on down through their equipment. Someone actually asked me why the F-16 uses an older style gun while most of the American TSF figures use the modern type. I believe it is due to how it shares the same hand sculpt as the J-10 so Volks just stuck with the closest equivalent so they could reuse some parts.

The jump units are also quite similar but not exactly the same. All the little deviations like the J-10's having canards and a slightly different false canopy are a neat embodiment of how the real life planes differ from each other.

Each jump unit attaches to a double A-Lock that's embedded in its attachment point. You can rotate the joint at the base as well as utilize the the A-Lock part's range of motion. The jump units tend to pop off when rotated so I generally just remove them and place them back on in the desired position.

Luv that burnt metal detailing on the engine nozzles.

You get both an empty gun and empty sword mount pylon. The sword mount can move up and down to depict it releasing a sword. On mine the sword mount tends to come apart when moved but easily goes back together.

The sword bearing pylons can also be moved into place.

I really love the look of the J-10's swords. They're less ornate than say a Shiranui's but the simple black line detailing and metallic paint is extremely eye-catching. The front heavy design is actually based on a Chinese Dadao sword.

Like on the other A3 figures, all weapons held by a hand have one permanently attached.

The swords are definitely the star of the show in terms of accessories and the J-10 is fully capable showing them off.

When loaded up with four swords the J-10 looks quite imposing.

The J-10's assault cannons are a nice and simple design.

Even with four cannons, the J-10 can still balance well.

I find the J-10 looks its best with a mixture of melee and projectile weapons.

The combination of its overall muted design sense and the olive drab coloring lets it walk the fine line between cool and practical (practicool).

As a regular retail release, the J-10 eschews tampographed markings in favor of a sheet of uncut decals. They are regular sticky type decals and allow you to customize the J-10 as either Cui Yifei's personal unit or one of her subordinates. Only her name is on the sticker sheet as this is before the rest of Bao Feng Test Flight were given names and faces.

Speaking of Cui Yifei, the back of the back has a picture of her from back when Total Eclipse was still just a book series. Her final anime design is about the same.

I can't help but think she looks vaguely familiar to some celebrity. I think I saw that person advertising cars or something.

During the Blue Flag exercises, Bao Feng Test Flight found itself pitted against the best and brightest of faceless aces from around the world. When pitted against a Japanese Type-94 Shiranui in mock combat, the J-10 is a tricky opponent.

The front weighted blade allows the J-10 to swing its sword around like a whip and let the momentum of each swing deliver a punishing blow.

The J-10 is another excellent late series A3 figure that will delight both fans of the series and collectors with a weird fetish for robots with abstract faces. The extra details combined with the gorgeous swords give the J-10 a real warrior's swagger over the more mundane F-16. While the F-16 seems to have hit rock bottom with its aftermarket prices, the J-10 still hovers around its original MSRP of 6,500 yen. I've noticed more A3 figures popping up more frequently at Japanese based shops like Rakuten, Mandarake, Jungle, and Amiami so keep a look out and you will probably find a good deal on a J-10.