Last time Leonardo came up to visit, we made a stop at this discount store just over the border. Discount stores are always great for bootlegs but this one was hit or miss. Today was a hit.

We found an assortment of Quick Change transformers by Polyfect. There were a large assortment of various animals and dinosaur transformers on cards for the low price of $1.99 each. 8 were listed on the back of the card, I bought 5.

As I began to examine them I realized that they were parts of sets, and that you needed all 8 to create 2 combining robots. Unfortunately, we cleaned out the store stock, and we were left with incomplete sets.

Fast forward to 4 months later – I am at the Salem Flea Market when I see the remainder of the figures I need. $4.99 each seems high, but when am I going to find them again? Finally I could come home and do my research on these.

They are clearly bootlegs, but of what? They are no Transformer known to me. I decided to focus on the dino themed ones as I figure they are part of the same set. I was right.

In addition to the individually carded versions, these were also available in a box set called “FRESH DINOBOT” sold in Big Lots and other discount chains. The versions found in the US had US packaging but I’ve seen them in Chinese packaging as well. But even those were bootlegs.

Using my Google-Fu I traced their origins to a Japanese company called Marushin*. They were originally part of a series called Deformation Dinosaur Dino Max (恐竜変形ダイノマックス). 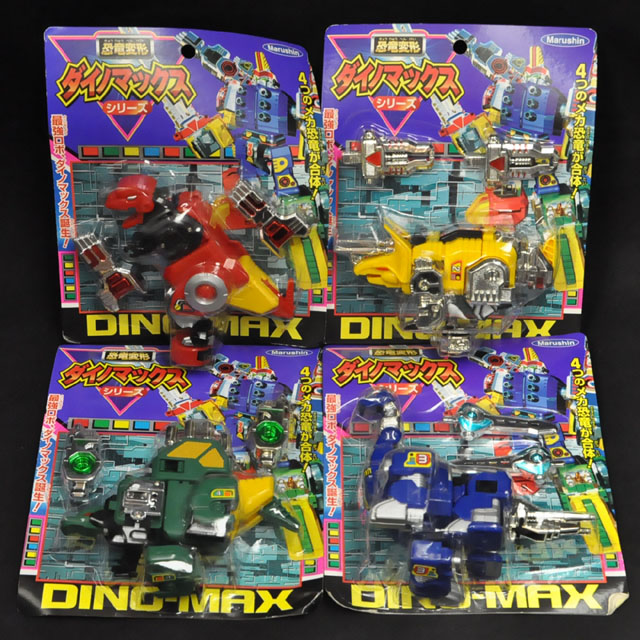 Let’s go over each of the components, shall we?

Tyranno Bot is a T-Rex that transforms into a robot. The design is actually rather nice in Dino mode, but the robot mode is terrible. It might have been passable in the original version, but the Bootleg is too far removed. For some reason, the bootleggers added a spiked shell to the toy, which the original does not have.

Stego Bot is a totally different shade of Green from its original Japanese counterpart. Other than the color though, the molding remains the same. They didn’t bother painting the face on this version.

Tritop Bot is cool, but once again they added a large spiky cover to the back not found on the original. It’s supposed to come with two extra weapons but only one was included.

Finally, here’s Bronto Bot. The large fin on the back is an addition by the bootleggers. Also, the bootleg packaging has him transformed incorrectly.  His body is upside down. Kind of cool that it works both ways though.

To make the combined figure, you pretty much have to disassemble the whole thing, resulting in a mess of parts.

The completed core robot is actually very cool looking, but only about 7 inches tall.

The chrome weapons combine into shoulder cannons that snap into the arms. The green cannons on the Stego Bot are supposed to clip into the back of the arms near the cannons, but the bootleg is unable to do this.

The head of the Triceratops becomes a shield, and he can also hold a chrome gun.

The remainder of the chrome components combine into swords. Had I had all the parts with the Tritop Bot, I could have had two swords.

This is the kibble you are left with when done.

Overall, it’s a cool combiner for $14. Yes, the plastic is terrible, and yes the fit and finish is bad, but it has sparked my interest in getting the original set from Japan, which looks like it can be had for under $50.

In addition to this version, Marushin also produced a version with grey plastic instead of chrome called Dino-X. It’s not clear if this is the same size or not. I also believe there is a candy toy version.

*it is unclear whether or not this is the same Marushin from the 70’s.

3 comments posted
Wow! This is way cooler than

Wow! This is way cooler than I imagined!

The weird part is there is no indication that it combines.

You've been around chogokin way to long to notice those small details!

Wow, i got the one made of animals from KB toys a few years ago before they went kaput. And i found a bootleg dx Ganbaruger at a flea market

I found the T-Rex and the Brontosaurus at a store called "Tuesday Morning" a few years ago. I didn't see the other two. Gotta admit, I got quite a haul that day. Besides the two dinos I also picked up a tool combiner robot (saw a larger version of it eons ago) a micromaster version of Fortress Maximus (which I did a review on) and KO's of the Terrorcons "Rippersnapper" and "Cutthroat." The only other one I saw was the red bird on the back of the packaging, but I already got that one in a set. The KO Terrorcons came in the same packaging and on the back there were photos of two Technobots. ("Strafe" and "Lightspeed"). Sadly, no "Scattorshot" and no "Hun-Grr." :(